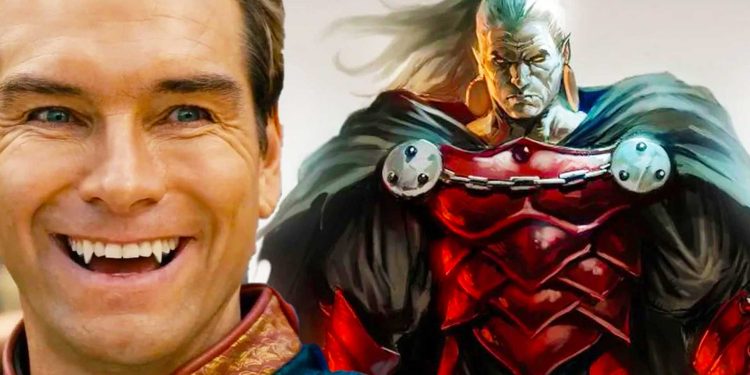 MCU fans are super excited after hearing the rumour that The Boys Antony Starr will portray the legendary vampire Dracula in the upcoming Blade movie. As with most rumours or unsubstantiated leaks, it is always recommended to take this information with a pinch of salt.

@MCUStatus recently tweeted regarding the rumour that Antony Starr will be playing Dracula in Blade saying: “It looks like Marvel Studios was able to “land” this actor & introduce him to a new CBM “home”.”

This rumour was brought up in a cute play on words because Starr plays Homelander in the satirical superhero show The Boys. Homelander is a superpowered figurehead for a shady pharmaceutical company who publicly tries to sell himself as The Boys universe’s version of Superman. Revealed in the series, Homelander is as shady as the pharmaceutical company that he promotes, secretly being a majorly damaged villain himself. Having played a deranged villain masquerading as a hero, Antony Starr could pull off a maniacal Dracula if the rumours prove to be true.

Origin of the Rumour

The rumour was not originally stated on Twitter, however, but on Reddit. The r/MarvelStudiosSpoilers Reddit page released a supposedly true list of scoops that included leaks on other Marvel Cinematic Universe works such as Deadpool, Black Panther, The Marvels, World War Hulk, Daredevil: Man Without Fear and specifically Blade. It’s thought that many of these rumours and ‘leaks’ will be further discussed at the following San Diego Comic-con and D23: The Official Disney Fan Club Expo in September.

The Reddit post stated many leaks; however, the Blade leak was short and sweet but informative, mentioning some of the actors that may make up the cast as well as the rumour about Antony Starr: “Blade: Mahershala Ali, Kit Harrington, Aaron Pierre, Milan Ray, and Bassam Tariq will be in attendance for some news. One big piece of news is that Antony Starr will play Dracula.”

While other roles have not been confirmed, according to IMDb we can expect the following so far: Blade will star Mahershala Ali, Delroy Lindo and Aaron Pierre, the movie will be directed by Bassam Tariq, and written by Gene Colan, Stacy Osei-Kuffour, and Marv Wolfman. Antony Starr has not been confirmed.

Fans are Excited and Dubious

Fans came out in droves on Twitter to express their opinions, ranging from excited to not knowing how to make heads or tails of the rumours. Most were enthusiastic at the idea of Starr playing Blade’s version of Dracula.

@LukeBecker_YN26 tweeted that Dracula would be an excellent casting for Antony Starr and that even a Wolverine casting bringing him into the MCU would be awesome as long as the actor gets introduced into the MCU. @StraderZane agreed with other fans that Starr would be a great choice, along with many others. On the other end of the spectrum, @itsBarreda mentioned that they didn’t know how to feel about the rumour. Agreeing, @Stryks suggested that wasting Antony Starr’s casting on a one-time villain would be a wasted opportunity.

While actors can be cast into roles that become ‘type-casted’ or typical for that actor, their career can become a little monotonous, however, it would be awesome to see a maniacal casting for someone as deranged as Dracula.

Do you agree that Antony Starr would be a good casting for Blade’s Dracula?