Star Wars: The Last Jedi is predictably making serious money at the box office, and has received critical acclaim – as well as high praise from many fans too. The low audience rating which appears on Rotten Tomatoes now appears to be the orchestrated result of a negative review-bombing smear campaign by a group of closed-minded individuals armed with bots, people who believe that only heterosexual white males should be allowed to exist in Star Wars films. Meanwhile, the person who started a petition asking for the film to be removed from canon has backed down, explaining that it was the result of pain medication and frustration.

That isn’t to say that it was a perfect film, or that there aren’t understandable complaints about it being made by people who felt genuinely disappointed. The film does have its flaws. However, a great deal of the most outspoken online backlash is misplaced, and one of the biggest targets for the hatred of some viewers has been, unfortunately, Rose Tico. Rose Tico represents everything that makes The Last Jedi a true Star Wars film. Her arrival isn’t heralded by a swell of dramatic music as she sits in her royal throne room, or by the striking visual imagery as she crosses a desert landscape before abseiling inside a Star Destroyer. Instintoshe wanders in to her first scene almost like an afterthought, before babbling like a star-struck crazy person. There’s no immediate reason to view her as being the film’s next great hero, and she certainly doesn’t fit the conventional image of one. But that’s what Star Wars is.

As fans, we’ve seen it repeatedly. In A New Hope, there was no reason to assume that a simple country bumpkin farmboy from a bland planet would become the galaxy’s greatest hero. He isn’t described as the Rebellion’s only hope, that role is given to Obi-Wan Kenobi and Luke is his naïve student. This nobody is forced to hook up with a selfish smuggler and his giant hairy sidekick, neither of whom seem all that important at the time. Together they’re the least-likely heroes to take on the might of the Empire. It’s easy to claim in hindsight that it had to be Luke because of his lineage, but in that first film the audience doesn’t know that. 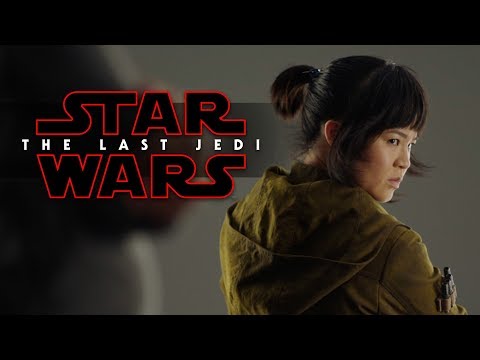 Throughout the series, one of Star Wars’ defining traits has been its unlikely heroes. It’s a David vs. Goliath battle where we support the underdogs. Yoda initially doesn’t come across as a great Jedi, and the audience immediately underestimates him – as does Luke. The Ewoks are the same, a race of cuddly teddybears who should stand no chance of winning. The prequel films, unfortunately, got away from that, with the exception (unfortunately) of Jar Jar Binks – although at least the intention was there. However, the point that Star Wars keeps telling us is that nobody is unimportant. Everyone has a role to play, and greatness can come from anywhere in the form of anybody. It’s a message the latest film makes abundantly clear.

Throughout the course of The Last Jedi we learn a few things about this new character, who is propelled in the story from being just another nameless shipboard maintenance worker to a member of a clique of rebel heroes, before moving on to the dizzying heights of becoming a fighter pilot hero in her own right. We learn a little about her childhood, her family, and how she views the world. It isn’t much, but it’s more than enough to go on. What’s important is that we learn what makes her tick and why she’s one of the good guys.

One of the best moments which sums up her character perfectly, is when the crooked hacker “DJ” demands payment in advance for intoing in to a First Order ship. Finn argues with him, but Rose Tico cuts through it all by simply handing him her medallion. It’s something of monetary value, but more important is its emotional value to her, as it’s one of a pair – the other belonging to her late sister, who sacrificed herself to save the Resistance fleet at the start of the film. That Rose offers it up freely and without complaint, despite the deep personal significance it has for her, shows how much she believes in what she’s fighting for. It may seem to be a lost cause, and it’s taken everything from her… but to her it’s all worth it.

Much as greatness coming from anywhere is one of the core themes of Star Wars, so is sacrifice. The scale of it – and the motivations behind it – help to define the heroes as well as to show where they are on a personal level. Luke sells his landspeeder to continue his journey – but complains about how little he received for it, because he hasn’t yet committed fully to the cause. Han and Chewbacca sacrifice their old lives as smugglers, much as Lando does in Cloud City… but grudgingly. The abbreviation DJ stands for Don’t Join, and that’s their mentality too. They only sacrifice their old lives because they’re forced to by circumstance.

In A New Hope, Princess Leia makes a bigger sacrifice: that of her entire home planet and her adoptive family to defeat the Empire, and while the consequences haunt her she’s still totally committed to the cause that evil must be defeated at any cost. In The last Jedi we see the weight of decisions like that affecting her, while Poe Dameron doesn’t. It isn’t that he doesn’t care, but rather that he doesn’t understand the true nature of sacrifice yet. Rose Tico, however, does.

Despite the obvious difference in scale, Rose Tico surrendering her medallion without argument is the sort of decision Leia would make. It’s easy to believe that if she had more to give then she would gladly do so, because that’s the sort of person she is. Rose, a person who would normally be considered just a face in the crowd, a somebody who we assume would be a nobody, always does the right thing. She says that the key to winning isn’t by destroying what they hate, but rather by holding on to what they love… and those are more than just words for her. She truly means it, and backs it up in her actions. And that’s what makes her one of the best new Star Wars characters in decades. She doesn’t have a flashy outfit like Captain Phasma, she doesn’t have a mask like Kylo Ren, the fighting moves like Chirrut Imwe, a fancy purple lightsabre like Mace Windu, or her own droid like Poe Dameron. She has an ugly jumpsuit, a stun gun… and lots of heart. And that last factor alone is what counts.

The Last Jedi is a great Star Wars movie, although it’s fair to say that it’s proven divisive – even if most of that division has been intentional. The film has everything fans could want from a Star Wars film, even if it also has a few things they don’t want too. It’s exciting and bold, and unlike The Force Awakens it dares to bring some originality to the series. Not everything works, but for the most part it does. If you’re going to complain about it, then at least try to complain about the genuine flaws.

But hating Rose Tico? That’s a big mistake, because she’s everything that Star Wars is meant to be.