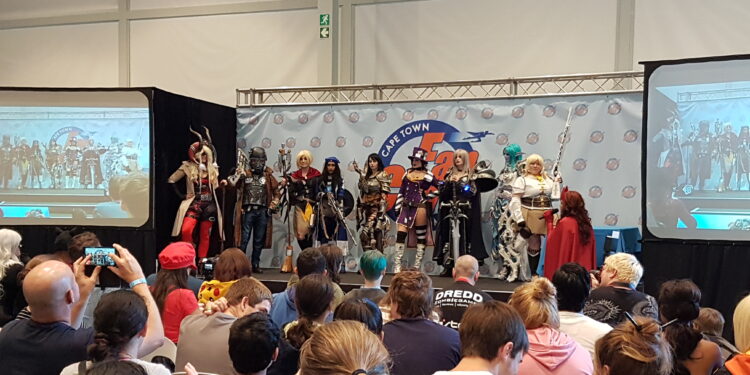 From the comic shelves and onto the Cape foreshore; this year’s FanCon 2017 Comic Convention was an impressive step in the right direction. As my press-ganged accomplice and I circled floor after floor of the Cape Town International Convention Centre parkade, I wasn’t entirely sure what to expect of the weekend ahead. I had been absent from last year’s FanCon, partially due to my resentment at what I then considered a usurpation of Stadium on Main’s Free Comic Book Day. FCBD is a favourite, annual check on my calendar – a free event, open to the public, where every man, woman, child, and cosplay variation of such could immerse themselves in some real geek culture, enjoying a variety of table top gaming, local comic-culture merchant stalls, some great local discounts, and, of course, free comic books. It was one of the only events of its kind (locally, at least) and, in my opinion, vital to keeping the comic book culture alive in Cape Town. The miser in me had bulked at the idea of having to pay for entry into an event that the counter-culturalist in me firmly believed should be open to everyone. The capitalistic audacity!

Turns out FCBD is totally still a thing and I couldn’t have been more off the mark, but we’ll not dwell on that. As the giant “I’m not really into comic books” German grumbled beside me and we circled further upwards through more levels than the parkade should logically be able to hold in our endless quest for a parking space, we quietly wondered aloud to ourselves, “Is this all for FanCon?”

It had to be. The only other option was the DecorEx exposition happening in the CTICC main hall.

But what sort of a nerd would go to that, right? The FanCon hall was packed. It was thronged with people of every age and description. The vibe was exciting and engaging, and I felt the same sense of inclusion that I was so worried would be absent from this larger event. Children dragged parents from stall to stall, just as parents dragged children from stall to stall. I watched a Princess Leia mom give money to a miniature Spiderman to buy a Captain America comic and my heart almost wept. I stood in front of a store named Ag Please Daddy as a tiny Lando Calrissian literally said, “Ag please, Daddy,” to his daddy!

As I looked around, I didn’t see a hall full of half curious lookie-loos willing to fork out a few bucks for the “ComiCon Experience” because they’d bought the Avengers Blu-ray box-set and were so totally into comics now. And Robert Downey Jr. But mostly comics.

I saw the Cape Town comic scene more alive and well that I could ever have hoped.

The trove of mech available was immense and incredible. From Steam Punk regalia to hand crafted jewellery, cushions, t-shirts, charms, and Cthulhu litho prints – the list was virtually endless. I could fill this page with the horde of exciting curiosities that were available. Did you know that there’s a guy in Cape Town who professionally moulds life-sized dragon busts? Because I do. What garnered by far the most attention of the weekend, was the local cosplay competitions – specifically the Advanced Cosplay Finals on Monday. I cannot suggest enough that everyone makes an effort to find pictures of the incredible outfits that our local heroes cobbled together. You will be astounded at the detail and quality of the costumes that were on show. And while there were only three places awarded at the end of the competition, many of the outfits on show were of a truly international standard.

A Panel discussion programme ran the length of the event, featuring both international and local professionals. It was wonderful seeing locally grown creators sharing the stage with some of the world’s greats. But even more so was seeing those greats interact directly with the up-and-coming artists of today, answering questions and giving guidance of a professional and international standard. But in my opinion, it’s the local creators who stole the show. So few people outside of the comic scene realise just how many incredible writers and artists we have producing world-class work in our country. The talent is incredible, and their dedication to bringing their works to life, in many cases well above what one might consider the global standard, is to be admired. As one of the panellists said; in the age of the internet, anyone can start a comic book. But it’s only the few with the dedication to stick with it, to hone their craft, to learn, to never stop trying, who find success in the end, and from what I can see our creators have that in spades.

By Monday afternoon, the giant “I think I could maybe get into comics” German owned a signed copy of Eric Powell’s recently launched Hillbilly and didn’t grumble once on the way home.

I’d call that a win.