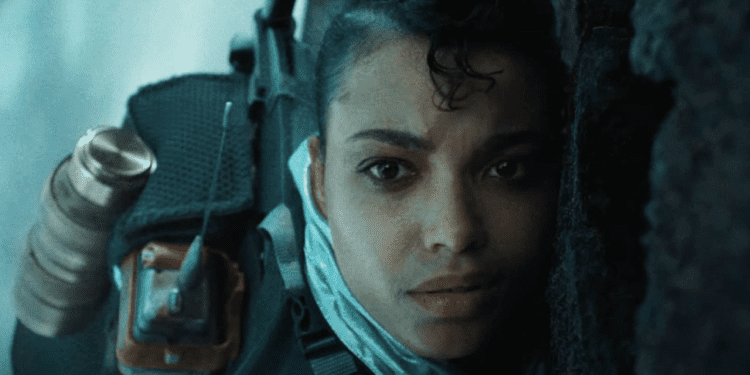 Earlier today, Netflix dropped the first teaser trailer for their upcoming live-action Resident Evil TV series. As expected, the first footage gave us a glimpse at the post-apocalyptic chaos ahead. Now, a second teaser trailer reveals the monsters (including the T-Virus, lickers, giant spiders, and more) coming to the horror show.

Eagle-eyed fans spotted a hidden QR code and a URL overlay over one of the scenes. Both these led fans to UmbrellaisJoy.com, where the second teaser trailer was discovered.

Together with the trailer, the site also elaborates on the plot for the live-action Resident Evil TV show coming to Netflix:

“The all-new series expansion brings the best of the Resident Evil DNA forward – bad-ass heroines, insane creatures (some new/some familiar), a battle for survival and of course, a deep mystery to unravel. Andrew Dabb expands the directions with fresh storytelling, bone-chilling horror and an action-packed spectacle perfect for summer binging.”

“2036 – 14 years after a deadly virus caused a global apocalypse, Jade Wesker fights for survival in a world overrun by the blood-thirsty infected and insane creatures. In this absolute carnage, Jade is haunted by her past in New Raccoon City, by her father’s chilling connections to the Umbrella Corporation but mostly by what happened to her sister, Billie.”

“The games are the backstory,” Dabb said in a recent interview. “So everything that happened in the games happened in this world in the timeline that it happened.”

That means that the games are canon to this world, but it is set before some of those events. “What we’ve seen a lot of [in zombie movies] are the days, the weeks, and even the months afterward,” he said. “But what we haven’t seen a lot is the lead-up because, you know, the movie usually starts when the zombies show up, right? It doesn’t really start before that. And then we haven’t seen what the world would look like when it has come to terms with what’s happened. Humanity is adaptable and we adapt to a lot of things. We’re adapting to COVID literally right now. We would adapt to a zombie outbreak. It might not be pretty and it might not look like Los Angeles 2023, but we would do it.”

It can only be better than Resident Evil: Welcome to Raccoon City, right?

Tell us, are you excited about the Netflix series after watching the Resident Evil trailers?