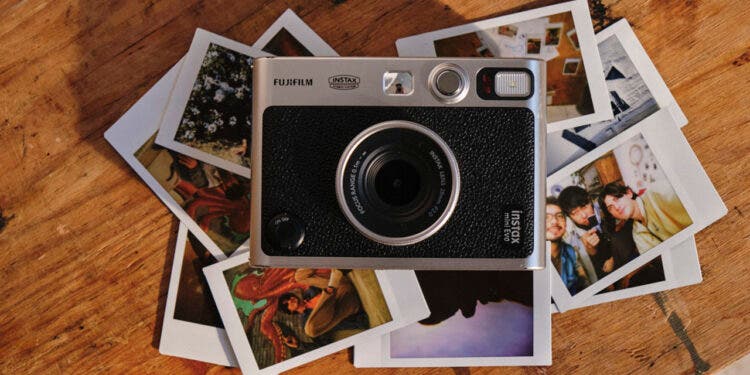 Fujifilm has found something special in the market with its Instax range. There are essentially two main devices from the brand for the Instax range – the Instax Mini and the Square. These two devices each have a number of variants as well. And Fujifilm isn’t about to let the range stagnate, offering upgrades on devices while also introducing a few new editions to the family. A few months ago, the brand launched the new Fujifilm Instax Mini Evo.

Although the name, Instax, refers to the instant nature of shoot and print, the Fujifilm Instax Mini Evo allows users to capture, save, edit and then print once they’re happy with the result. There is still a sense of instantaneous results, which will still be a hit at parties, but do the new features improve the overall experience?

The new Fujifilm Instax Mini Evo doesn’t fit the build of a conventional Instax camera. However, it does still look like a Fujifilm camera. It has more in common with the Fujifilm X-Txxx range than other Instax units. This simple switch in design is a suggestion of the more premium features of the Evo.

As such, the Instax Mini Evo has a retro look about it. Its faux leather and chrome frame adds to the retro appeal. The look is further emphasised with the lens fixture, despite the lens not being that large. It actually serves a dual purpose, with the second being that of a toggle to change the lens effects.

Fujifilm has added many buttons that are similar to that of a conventional camera but have tweaked them for the purposes of the Instax features. One new addition, however, is the print trigger on the top right-hand side. Once you’ve captured your image and are ready to print, simply pull back on the trigger to begin the printing process. It’s a very nifty mechanism for the print feature, which isn’t very conventional but works perfectly.

The rear of the camera houses the LCD screen, which we’ll discuss more on in the next section. The screen sits atop the rear door. Using the release switch on the left-hand side, the door unlocks and you can open it to remove the previous pack of film and insert the next to keep those prints going. However, the door itself isn’t all that functional. It requires a bit of tinkering to get it open. This is the only negative aspect of Evo’s design.

The left-hand side of the camera has an opening, where you’ll receive your prints once they’re done. There’s also a little flap underneath the camera, which houses two ports. This includes the microUSB port for charging the built-in, rechargeable battery with the second being that of the microSD card port.

Another big change on the Fujifilm Instax Mini Evo is the removal of the viewfinder you’ve become familiar with. Instead, you’ll be using the 3” LCD screen as the digital viewfinder.

It’s not the most brilliant of screens in terms of viewing, however, it is fairly accurate. What you see on the screen is almost exactly what you get from the print itself. In that vein, you don’t necessarily need the best screen and visuals but rather, something that’s more accurate to the end product.

The screen itself isn’t touchscreen either. But that’s not an issue. There are a few navigation controls on the side of the screen, along with a few shortcuts to open specific menus and photo playback. It’s quite easy to figure out, even for a first-time user.

The Fujifilm Instax Mini Evo is not short of features either. While already improving on a few features of the more conventional Instax units, there are also a few new ones thrown in.

New features include adding custom filters and lens effects to your shots. What’s great about these is that you can apply them before and after you take the photo. So, you’re not left wondering after the fact what the image would have looked like with another effect in place. This, more than any other feature, is the most impressive on the Evo. The flexibility it brings post-snap is where the Evo stands out.

Another two useful features of the Evo are the toggle for flash and timers. If you don’t want the automated flash, you can simply turn it off. And, if you want to take a timed photo, you can do that, too.

Unlike the analogue indicator of how much film is left, there are 10 dots onscreen when shooting and printing that gives you a visual of this. With every print you make, one of those dots are emptied.

There are also other more technical features added to the Fujifilm Instax Mini Evo that aren’t available on the standard Instax. This includes autofocus, white balance, exposure and more.

The overall performance of the Fujifilm Instax Mini Evo is very solid. Snaps are good and printing is super easy. There really isn’t much of a learning curve when first using the device. Just mount the film in the rear and you’re pretty much set.

Using the new UI is also fairly intuitive. The menus aren’t complicated either, with a few useful toggles and shortcuts for good measure. Where there is a bit of a let-down is that each of the filters and lens options do take a few seconds to load when skipping through each until you find the best combination. In total, there are over 100 combinations to get through, so it’s not the easiest to transition between the various options when having to wait a few seconds at a time.

It’s worth pointing out that if you’re going to save a few of your prints for later, it’s best to get yourself a microSD card. The internal storage is about 60MB, which saves about 45 images. 1GB will increase this to around 850. Interestingly, the camera supports up to 1TB of external storage. Although I don’t see how, this allows you to store a whopping 850,000 images.

In terms of the built-in battery, you’re looking at about 100 shots with an additional 20 prints. That should be more than sufficient for an outing to a party. When charging, the flash on the front lights up a bit to let you know that it is currently charging. It switches off once done and you’re good to go. This takes about 40-60 minutes in total, so isn’t that bad.

What’s annoying is the use of the older microUSB cable. While it does include the cable in the contents, it means you’ll need to take it with you if you plan on recharging it later and not at home, since many users have moved onto Type-C cables for their smartphones.

The Fujifilm Instax Mini Evo brings with it a host of new features in a hybrid camera. It’s not quite the instantaneous nature of other Instax cameras, but allows you to save, edit and then print to your liking. Additionally, with a host of filters and effects, you have plenty of options to choose from to make those images pop even more.

The Fujifilm Instax Mini Evo is probably one of the more expensive Instax cameras, retailing at R2,499. That said, it’s not too far off from the Square range.

Despite its price point, it’s probably one of the most well-priced units in the range. The use cases for the camera are always welcome and there’s always a party or two to attend where it will be appreciated, provided you’re willing to spare some film.