While Epson has quite an extensive range of printers within its catalogue, the company has focused quite a lot of their resources and research efforts into the continued improvement of its L-series units. These units are known for their Ink Tank System (ITS), which Epson introduced a few years back as a means of saving on ink replacement costs for the consumer. In late 2017, Epson launched their latest lineup of L-series printers, which included the L6190, L6170, and L6160 for business, along with the L4160 for small business and home use. The range included the new ITS along with performance improvements in terms of speed and efficiency. We received the L4160 unit for review and put it through a number of printing tests as a comparison over a few Epson models we’ve reviewed previously. The biggest, and most noticeable, improvement to the design comes in the form of the redesigning of the ITS. Previous units that included ITS had a separate module, which connected to the side of the printer. The module also included a nozzle to turn the flow on and off during transport or when not in use for an extended period and had to be detached in order to refill with ink. While the overall result produces economic benefits to the consumer, it didn’t quite look the part and felt clumsy at times. This has all been changed with the Ink Tank System V2.0, which has now been built into the printer body. The ITS site on the front right of the printer, which still has a semi-transparent casing to allow users to physically check the ink levels before any printing. In addition to this, the refilling system has also been adjusted slightly, with a new “spill-free” nozzles that are specially designed to fit into a specific compartment. This means that when you refill any of the tanks, only the corresponding ink refill can be used to fill that ink colour. While this technique prevents users from accidentally filling the incorrect tank with the wrong colour, it also limits the ink bottles one can purchase.

The new L-series units take up a lot less real estate with the redesign, which a little higher than previous models, but a lot less wide. The L4160, along with the other units in the range, follow the basic all-in-one printer layout, which includes a scanner on the top, paper feed at the back, the control panel on the front, and paper tray below that. The control panel itself is fairly standard as well, with a home button on the left, 1.4-inch LCD display in the middle, and a few menu buttons on the right. Apart from the power out and USB cable out on the rear, the L4160 includes an SD card reader on the front of the device. This is fairly limiting for a device aimed to provide quick and easy printing without connection to your computer.

Overall, the matte black design doesn’t do a lot to shake up the design footprint of the modern printer, but with the included, and embedded, ITS module, the Epson L4160 does a pretty good job in that respect. Depending on how you want to use the device, there are different methods of setting up the printer. The most common would be connecting the printer to your computer or laptop by means of a USB cable. Upon first boot, the printer OS takes you through a few steps of setting up the printer heads and nozzles to confirm everything is in working order. While the physical aspects of performing this task is pretty simple, I had quite a challenge installing the downloadable Epson drivers and Easy Photo Print software. During Windows installation, the process kept crashing, either right at the start, or a few steps into the installation, without it ever transferring any files. This was something of a frustration for me, seeking various solutions to the problem across the three devices I had attempted to install the software on. Eventually, I had to settle for the Windows downloaded drivers and print options, which, although got the job done, wasn’t sufficient enough to make the changes I knew were possible for the Epson printer.

After a few prints using this standard method of connection, I reverted to the more mobile features, which included via an SD card, as well as over WiFi via the Epson mobile app. Using the SD card connectivity for photos added to the card, I could make use of the onscreen menu options to select the images to print, the size, as well as the number of copies. The display also indicated the cropped outline of what portion of the image the printer would print where the aspect ratios didn’t match the size of the paper you’ve chosen. This was pretty useful but lacked the killer touch of allowing the user to crop the image or adjust the part of the image to include within the selection. It’s also worth noting that if you have quite a number of images to print, you’re required to select each of them manually – quite a slow process in the end, even for 10 print it would turn out. In addition, there’s not support to print documents via the SD card reader.

Connecting via the mobile app over WiFi seemed to be the way to go in this case. Not only was I able to choose the images to print a lot quicker, I was able to adjust the aspect ratio and exactly which regions to crop for the print. The only part I see posing a challenge to the average consumer would be connecting the printer to their home WiFi by means of the control panel. Other than that, there were no challenges to speak of. The L4160 has a factory specification print speed of 10.5ipm for black and white prints and 5ipm for colour. It is worth pointing out that these are the default quality prints on 10x15cm (approximately A5) pages. Judging the actual print speeds and quality at these settings provided reasonable photo quality. Printing speeds met all the requirements and specifications listed, but that isn’t why we’re here. Basic printing and speed tests aside, I turned up the print quality to maximum, at 5,760×1,440 dpi, with premium glossy photo paper. The print quality went from acceptable to amazing. The comparison in quality was appreciable and did an amazing job of reproducing the quality of the selected image. Print speeds, needless to say, dropped quite a bit and took roughly two minutes for the same sized photo to be printed.

Further tests included a mix of paper quality and types and yielded quite a number of varied results. While many of the overall image quality was good, the matte paper for a maximum quality print produced the worst results, with the ink appearing washed as it absorbed into the paper, leaving an almost colourless print after the ink settled. A few further tests on the matte paper for prints such as invitations and the likes delivered a lot more promising and pleasing results. It’s clear, then, that the amount of ink used on the maximum quality print on the matte paper was too much. It’s important to know the type of printing you wish to conduct and the type of paper you should use beforehand. It’s not to say that the L4160 delivered bad results, but rather that the type of image printed for the paper selected wasn’t suitable, to say the least.

Being a small business printed, I tested printing basic text documents, as well as the scan and copy features. The paper feed is able to hold up to 100 normal paper, and with a print speed of around 30 pages per minute in black, it’s no slouch. The copy feature gets the job done, although there’s nothing overly special to note here. Not that it’s bad though. Unfortunately, given the lack of software on the computer, I wasn’t able to test the scan capability. 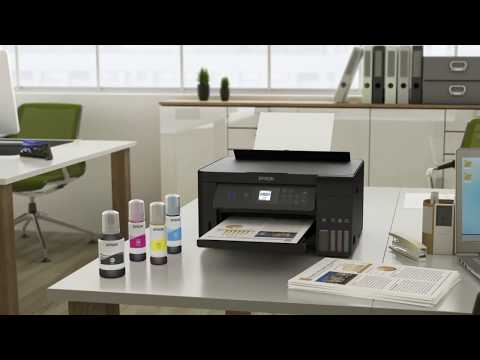 The newly released Epson EcoTank ITS L4150 photo printer delivers on its promise of providing great image print for your photos, with bright and accurate colours. In comparison to last year’s L486 printer, the L4160 is definitely a step in the right direction in terms of providing more affordable professional photo printing to the consumer. At a retail price around R3,000, it’s roughly R1,500 less expensive than the L486, with a pretty similar set of features, minus a few removed and commonly unused features. So, if you’re looking for a printer which delivers great photo prints, and without an additional set of features away from the 3-in-1 scan, copy and print, then the L4160 is a solid purchase.