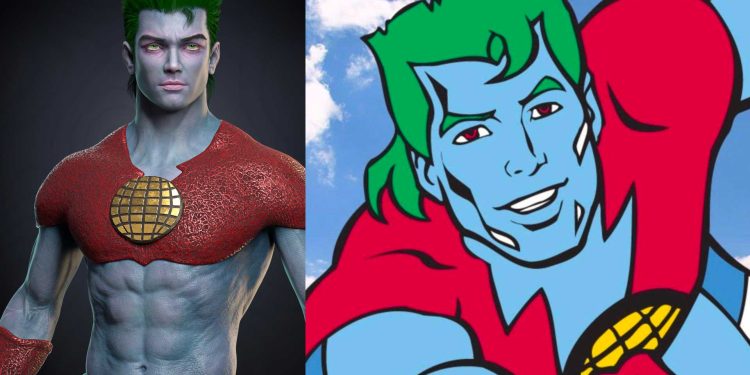 Is the world ready for a live-action Captain Planet movie?

Everyone remembers Captain Planet: a classic 90s cartoon about a blue guy who was the protector of Earth. The show had an environmentalist message that resonated well with critics of the time, and it also managed to be enjoyable for younger audiences without sounding too preachy.

As is the case with most classic animated franchises, there have been rumours going around for a while about a possible live-action movie remake of Captain Planet. Some big names have been tied to the project, but, so far, there has been no further news about the film.

Sure, the idea of having an environmentalist cartoon be made into a live-action film sounds very 2021, but we can’t help but wonder…

Can Captain Planet even work in a live-action setting?

Leo and the Planeteers

Since 2016, word has been going around that Leonardo DiCaprio and his production company, Appian Way Productions, were interested in bringing Captain Planet to the silver screen. Together with Paramount, it seemed like a Captain Planet live-action movie was almost inevitable – until it wasn’t.

No one knows precisely what happened with the project – it simply vanished. However, that wasn’t the first time we heard about a live-action Captain Planet movie: that honour goes to Sony, who tried to make a film out of the Planeteers and their blue friend a few years before Paramount and DiCaprio came along.

Even David Coburn, Captain Planet’s original voice actor, was ready to be in DiCaprio’s movie. Coburn replaced none other than Tom Cruise in the original cartoon, and having him on board for a new live-action adaptation would ensure thousands of loyal fans would be more receptive to seeing new versions of their beloved characters.

Among all the actors/producers in Hollywood, there’s none that makes more sense for working on a Captain Planet flick than Leo DiCaprio. His work with the Leonardo DiCaprio Foundation has shown some real results in the field of environmentalism and conservationism, truly making a difference in the world.

Considering that DiCaprio confirmed he was working on a Captain Planet film in 2016, that would mean that he would be working fresh off his Oscar win for The Revenant. DiCaprio was the perfect choice as a producer for this film, and yet, we still didn’t get the movie we were promised. And, oh boy, was it an interesting plot.

Making a live-action version of any cartoon comes with a unique set of difficulties. If you make the film resemble the cartoon it’s based on too much, you run the risk of people calling it “cheesy” – but stray too far from the source material and you’ll get an angry mob of keyboard warriors.

Fortunately, the screenwriters for the 2016 Captain Planet live-action movie had the right idea and thought about making a story set some years after the original show. One thing that screenwriters Jono Matt and Glen Powell agreed upon is that considering Captain Planet’s source material, you simply shouldn’t try to make a serious movie out of it.

Matt and Powell toyed with the idea of making a live-action Captain Planet movie that felt more like Marvel’s Deadpool, in the sense that the character would never take itself too seriously.

Perhaps this lighthearted take didn’t sit too well with the higher-ups, who might have preferred a Captain Planet movie to be more DC-like, complete with the brooding and sombre colour palette. Be as it may, a live-action Captain Planet, perhaps one directed by James Gunn or Edgar Wright, would absolutely work, especially in today’s renewed era of environmental consciousness.

What do you think? Would you like a live-action Captain Planet movie?