Despite the initial forecast of a slower 2020 when it comes to consumer spend, it turned out to be anything but. The gaming sector continued to grow, most likely as a result of more people having to spend more time at home. In addition to that, Nvidia kept their release of the GeForce RTX 30 Series in September. As such, we eagerly awaited the release of the next wave of gaming laptops to sport the nearly launched GPUs. This past month, I had the opportunity to review the ASUS ROG Strix SCAR 17 G733, complete with the Nvidia GeForce RTX 3080 Mobile GPU.

I hadn’t expected that it would be launched in the three months following the Nvidia launch event, let alone being available within our shores here in South Africa. Queue the tail-wagging. This, in part, is a testament to the strong gaming community and sales in the country, with laptops one of the fastest growing sectors in the tech industry. The ASUS ROG Strix SCAR G733 has a familiarity about it. Its build is in line with the previous generation of ASUS Strix laptops. The latest unit doesn’t stray too far from the form-factor, although there are a few notable changes to that, which make a significant difference overall.

Starting with the lid, it resembles the ASUS ROG Zephyrus G14. However, it’s not quite the AniMe Matrix with its animated LED lighting. Thanks to its dot matrix design, created with precise electroplating, it includes the ROG letters, along with some other characters. There is still an LED ASUS logo on the lid, which colours can be customised accordingly.

There are quite a few of the miniature logos scattered throughout. Something of an easter egg hunt to find them all, although I’m not quite sure that was the intension.

One of the other notable changes, to customise your look, is the Armoury Cap. Included in the contents are two additional caps, making three in total. The colours of these are spangle silver, translucent black and a rubberised grey version. ASUS also provides templates for the Armoury Cap, which allows those with access to a 3D printer to customise even further.

The LED lighting has improved quite a bit. While I’m not one for over-the-top lighting, these are quite nifty. Using the Armoury Crate software, users can change the lighting effects, including some preloaded lighting displays. Additionally, the lights are arranged in sections, so you can have each customised to its own effect. It’s quite impressive overall.

The mix of black finishes on the ASUS ROG Strix SCAR 17 G733 has a softer look. There is more ROG branding than on previous models, with very little in the way of any ASUS monikers. With the ROG brand having grown somewhat into its own segment, the focus going forward is clear. 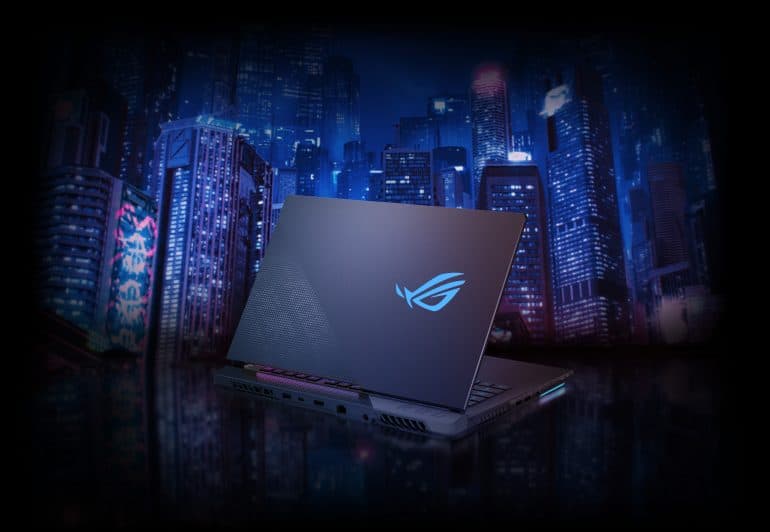 As with previous models released in 2020, ASUS continues its use of the Keystone port. On the ASUS ROG Strix SCAR 17 G733, the Keystone II technology is used. The Keystone allows users to protect their data, keep their configurations across different units while also adding a unique look on the laptop and on your keychain.

I always find it amusing that there are still those that expect the likes of an SD-card reader or webcam on a gaming laptop, especially with the larger screens and smaller form factors of modern units. There’s enough to have all your gaming needs covered when it comes to the ports. 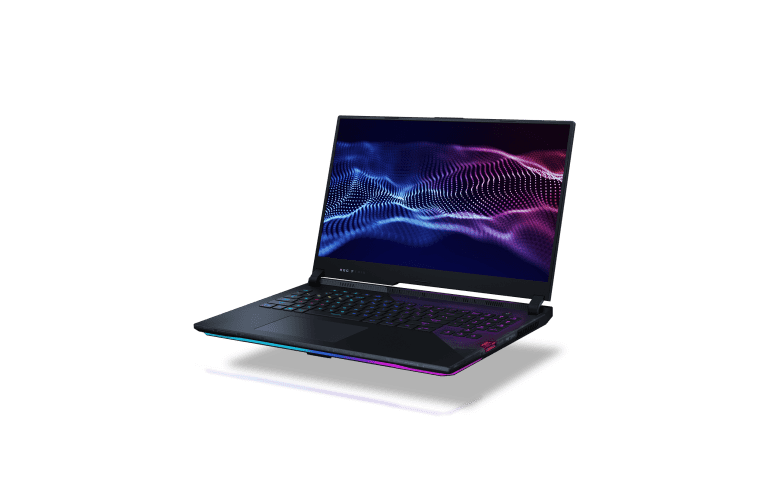 ASUS has always offered its users some of the best screens for its laptops. For the ASUS ROG Strix SCAR 17 G733, there are two options available. This includes a powerful 360Mhz 3ms panel, as well as a lower tiered 165Hz 3ms panel. Either option you choose, the refresh rate is notibly good.

As suggested in the name, the unit has a 17.3” screen. On the 360Mhz version, users are limited to a 1920x1080px resolution, with the 165Mhz version having a more impressive 2K resolution. As is the case across most brands, there are still some challenges to having higher frequency on higher resolutions. This is also the case on the Samsung Galaxy S21 Plus, I recently reviewed.

The colours are bold and vibrant with great contrast. The images are crisp and sharp and makes for some excellent viewing when gaming. In terms of the technical details, the colour palettes cover 98.6% sRGB, 73.9% AdobeRGB and 76.5% DCI-P3.

The real power lies with the internals. ASUS has swapped out the Intel Core CPUs with the latest from AMD. For the ASUS ROG Strix SCAR 17 G733, is has a AMD Ryzen 9 5900HX 3.30Ghz CPU, which provides excellent power capabilities.

While the CPU may be impressive in its own right, it’s the Nvidia GeForce RTX 3080 Mobile GPU that really steals the show here. It’s obviously not going to be as powerful as the fully-specced desktop variant, but it still set to deliver some excellent performances. 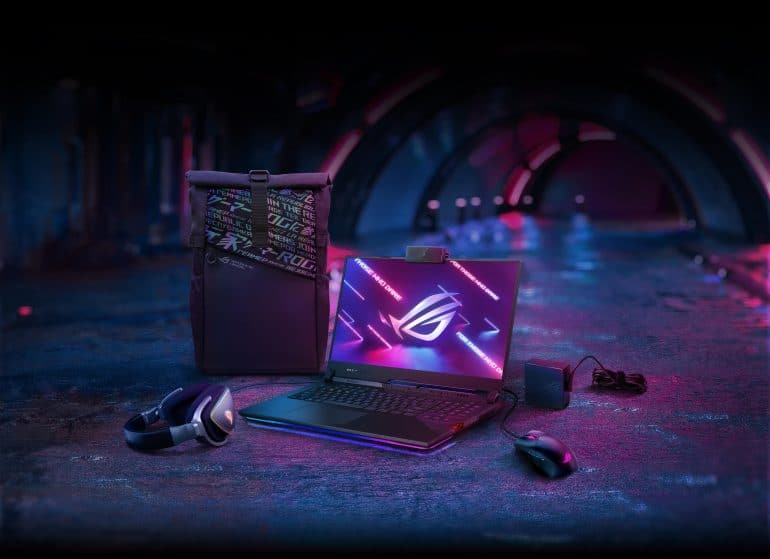 It may seem redundant to say at this stage, but the performance ASUS ROG Strix SCAR 17 G733 was second to none. The out-of-the-box experience won’t be for everyone. For those avid gamers and enthusiasts, you’ll definitely want to spend some time tweaking the settings using the Armoury Crate software for the best experience, especially when it comes to high frame rate AAA titles on maximum graphics.

That said, once you’ve started gaming, there’s no turning back. Having set up the laptop for all-out gaming prowess, I couldn’t help but become addicted to the FPS indicator on the top left corner as a breezed through those AAA titles with ease.

During my testing, I ran through a series of 10 AAA titles and a few additional Indie games to complete the set. Having first run each game through its default graphics settings for the first 10 or so minutes, the FPS counter was through the roof, reaching over 400 on most games. Changing things up to the max settings within the game, it dropped a tad, but still well above the 100fps range.

On the India games, the FPS counter never dropped below 300. Although the required GPU load isn’t as high, it’s still great to see the performance of the ASUS ROG Strix SCAR 17 G733 with the Nvidia GPU in action.

I did, however, encounter some graphical anomalies, especially on Shadow of the Tomb Raider. There were some textures that weren’t rendered accurately, creating a green place marker on some of those areas, looking like something on the behind-the-scenes footage on an Avengers movie set. This, however, was down to the Nvidia drivers, which we were made aware of prior to starting the review.

During the review period of two weeks, there had been two updates to these drivers, a third if you include the update just before receiving the unit. Having just completed the testing of the 10 games, running through at least an hour each, I wasn’t able to redo all those benchmarks again. However, on Shadow of the Tomb Raider, I’m glad to say that the glitches were resolved. It’s clear, then, that with a few more tweaks, we’ll be expecting even higher frame rates and performances from the GeForce RTX 3080 GPU.

Here are a few of the gaming benchmarks: 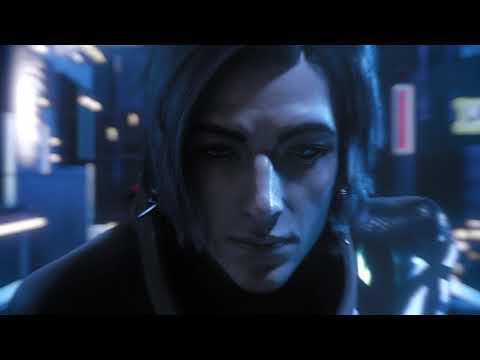 On all previous editions of the Strix laptops, they were fitted with a 66Wh battery. On the 2021 models, it receives a welcome upgrade to a 90Wh battery. Depending on your operating mode, the battery lasts anywhere from two to 11 hours.

Under normal workloads, such as browsing the internet, doing some work in Word or Excel and even the occasional video, users can expect to reach close to the 11-hour benchmark quite often. Using optimisation to extract longer battery life, you could even extend this to beyond the 16-hour mark, which was insane.

Switching things to higher loads, such as gaming, users can expect between two and three hours’ worth. Playing games like Tomb Raider, Witcher 3 and the likes, with 1080p graphics on high and no FPS limit, you can expect to have a battery life about two hours. In some instances, it just falls short, but will be around that ballpark figure.

Although many won’t be using the ASUS ROG Strix SCAR 17 G733 as a work laptop, it’s more than capable of lasting an entire work day without needing to stress. And if you do need to recharge the laptop and don’t have the included power adapter, you can easily make use of a compatible Type-C charger.

It was a thoroughly enjoyable experience to review the ASUS ROG Strix SCAR 17 G733. The unit ticked all the boxes across the board. From the design to the internals, there’s a great deal of thought and planning that goes into every detail. While I may not have covered it all here, with discussion points on the fans and cooling to the liquid metal paste, it’s outrageous how detail-oriented it is to extract even more performance from all its parts.

Barring some GPU driver issues (although just a software update away to rectifying), the experience was mostly flawless.  Pricing for the ASUS ROG Strix SCAR 17 G733 starts at R49,999 (RTX 3070) all the way up to R79,999 (RTX 3080), but this no run-of-the-mill gaming laptop all things considered. The configuration we received for review is around R69,999. Despite its high price point, these units are in high demand already having sold out in some stores.

If you’re looking for an all-out gaming beast while still requiring some level of portability, look no further than the ASUS ROG Strix SCAR 17 G733. It’s a complete package for the gaming professional and despite it being on the higher end of the pricing scale, there are very few shortcomings to speak of.