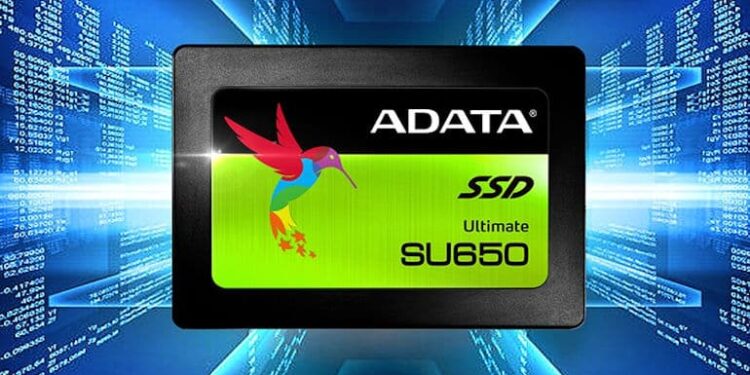 Towards the end of 2016, a new storage technology released commercially, having been announced almost a year prior. That technology was 3D NAND. In short, what this technology brought to the market was the capability to increase the storage capacity of portable drives, SSDs in particular, to a much smaller real estate. When the first devices were released, ADATA was one of the first companies to the market in the form of the ADATA’s Ultimate SU800 SSDs. A few weeks back, ADATA announced the refresh of the range of SSDs from their portfolio, which included the SU900, SU800, SU700, and SU650 units. We received the ADATA Ultimate SU650 SSD for review.

There’s not much you can write in terms of the looks department for most drives, but there are a few notable elements on the SU650. The first of this is how amazingly light it is. The drive weighs just 47.5g, which is quite amazing. You’ll notice this immediately when unboxing, and even more so when you swap out your existing laptop drive for the SU650, even other SSDs.

In terms of the dimensions, the unit is pretty much standard with a 2.5″ build. Due to the number of cases, both PC and portable, there isn’t much wiggle room for smaller sized devices as yet, with the SU650 actually feeling very hollow inside.

The unit is shipped in some lavish, flashy packaging, which has a reflective surface that’s very eye-catching. Some might attest this to indicate a non-premium device, which isn’t quite the case here. It may not mean much overall but is worth catching the attention of prospective buyers before leaving the shelf. This is a bit of strange one for me since ADATA doesn’t offer its SSD ToolBox for the SU650, in that it states it’s not compatible. For all the other versions of SSDs above this model, the software is compatible, making the decision all the stranger. You may not necessarily require the software in the end, but having the option available to those who enjoy such features would be useful. The software includes capabilities such as Drive Info, Diagnostics, Utilities, System Optimization, and System Info. The SU650 is available in three capacity variants in the form of the 120GB, 240GB and 480GB. The 3D NAND technology, in addition to keeping the weight down, also plays an important role in terms of the read and write speed, as well as the reliability. That said, reliability isn’t something that’s easy to measure within a few weeks of testing, even when putting the drive through numerous power tests and the likes. The specification sheet reveals that the SU650 has an MTBF of about 2,000,000 hours. That’s quite a long time before it’s scheduled to fail – more than 200 years if all is to be believed.

In terms of the benchmarks, the claim from ADATA’s factory benchmarks has the SU650 performing at sequential read and write speeds of 520 and 450MB/s, respectively. Putting the unit through the benchmark software (ATTO Disk Benchmark, Crystal Disk Mark, AS SSD Benchmark, and sequential read 520 write 450), and a few real-world tests, the results are fairly accurate. At times some of the results indicated read speeds well above the 550 mark, and write speeds around 490 as well. They do, however, average around 510MB/s and 400MB/s, respectively. It may not be the most spectacular results, but given the price range, and being the “budget” unit from the range, does make it quite a good set of figures.

Another aspect not always considered is the power consumption. SSDs already reduce the power draw from conventional drives by quite some margin, averaging around the 2.5-4W. ADATA’s range of 3D NAND SSDs has a draw of around 0.65W, four times lower than the already good 2D SSDs. Even more stunning was the power draw on idle, around the 12mW mark, which doesn’t even register at 1c per hour. This is incredibly good for laptop power usage, which can push up the battery life by an additional hour or more between charges. If you’re looking for all-out speed and performance, the SU650 provides a decent set of results but isn’t going to set any records or compete at the top. What it does do is offer a good benchmark for a reasonably priced unit. At a cost of around R1,199, the ADATA Ultimate SU650 SSD is an affordable option with 240GB capacity. With its 3D NAND technology, reliability is also one of its strong points, although it may be too early to make that call at this point.

You can find the review of the SU800 here.