This is a fascinating laptop. 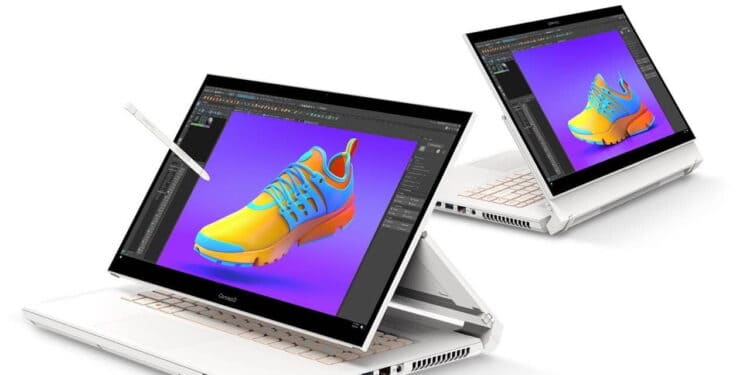 A few weeks back, Fortress of Solitude featured the first review from the Acer ConceptD range. Acer announced the range of ConceptD units, designed for creatives and content creators, at the next@acer event at the end of 2020. One of the more exciting units in the range is the Acer ConceptD 7 Ezel.

What makes the Acer ConceptD 7 Ezel special is that it features a convertible screen, folding out to switch into tablet mode thanks to its unique hinge. But it isn’t as simple as it sounds – there’s a lot happening behind the scenes. In addition to this, the laptop is a great advantage for designers with its touchscreen and included pen combined with impressive specifications. 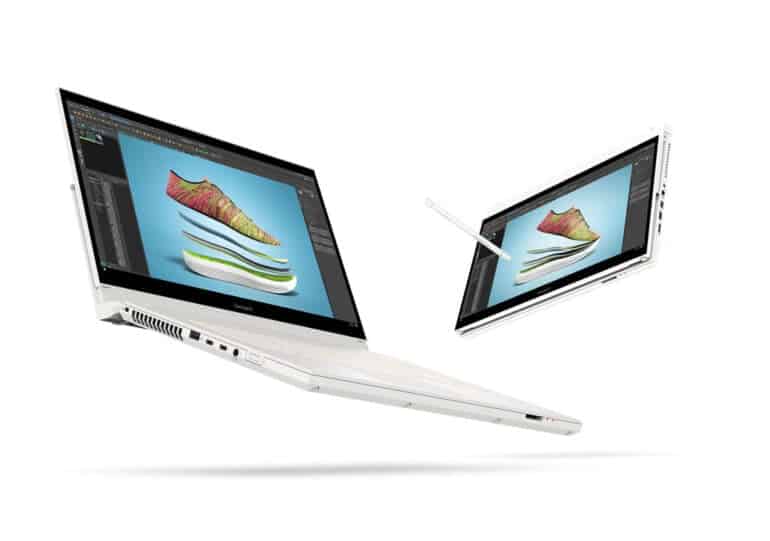 Acer has never been a brand to shy away from unique designs. This has already been shown on its ConceptD range in the form of the ConceptD 500. In addition to this, we’ve seen a similar design on the Acer Predator Triton 900, which I reviewed in 2020. The hinged 2-in-1 design, however, was spotted on the brand more than eight years ago on the Acer Aspire R7, resembling the NCC-1701 from the Star Trek series.

On the Acer ConceptD 7 Ezel, this ethos for the unconventional continues. Thanks to its unique hinge, the Ezel’s screen can be flipped around into various modes. It’s actually a second hinge that opens up a world of options for the laptop. By default, the first mode is that of a standard laptop. You can then switch this out to a display mode, into stand mode, and, finally, into tablet mode. No prizes for guessing where the device takes its name from.

Users needn’t worry about the weight of the screen and how they’d like to position the screen. The hinge is extremely sturdy, allowing it to stand upright and have the screen horizontal, perhaps a “float” mode, and still hold its position throughout. That’s quite impressive.

The device is almost entirely white across the exterior. What’s interesting here is that it may look like plastic, but the build is actually metallic. Usually, it’s the other way around. The white theme continues across most of the ConceptD range, but on the Acer ConceptD 7 Ezel, it makes for quite a challenge. It picks up dirt quite easily and the light colour makes it easy to spot as a result.

The reason the unit looks plastic is that the metal is covered in a ceramic coating. Acer claims that this is stain resistant. What this means is that it may appear dirty, but can easily be wiped off and not leave a stain. This is a relief for prospective buyers. The last thing you’d want is a stain ridden white laptop.

Due to the hinge and metallic elements, the unit is quite chunky. It measures 28.7x358x259mm and weighs around 2.5KG. This isn’t too much of an inconvenience, however, especially with the multitude of viewing modes, as well as the internals. More on that later. As with many modern laptops available, a good set of connectivity and port options are a must for the modern user. Whether it be a gamer, businessmen or content creator, it forms part of the essentials today. The Acer ConceptD 7 Ezel has ticked off all the boxes.

But, that’s not all of it. Along the front, you’ll also find an SD card port, as well as the housing for the Wacom EMR Pen. The left-hand side also includes the power button, which doubles as a fingerprint reader for easier login.

The positioning of these ports, however, can be questioned. Each of the ports is positioned on the front end of each side, which may pose a challenge when connecting devices and cables to these ports, while still trying to use your mouse. Further to this, the power jack is also fitted halfway down the right-hand side, which could also get in the way.

In terms of wireless connectivity, the Acer ConceptD 7 Ezel includes WiFi 6 and Bluetooth 5. 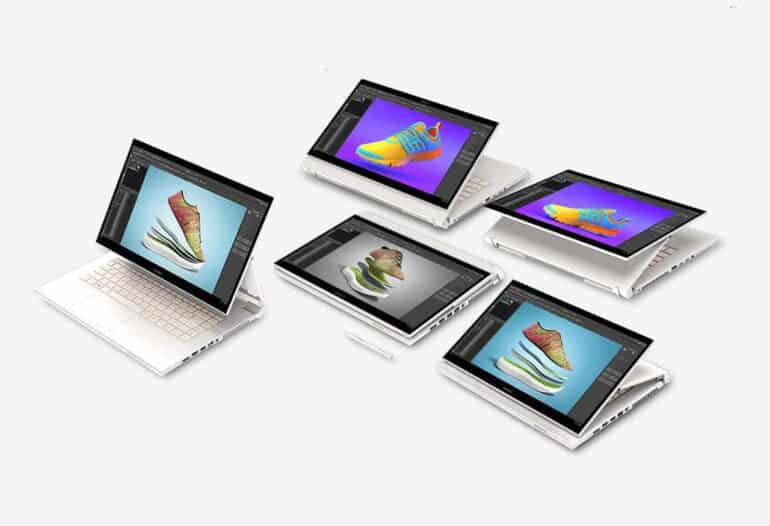 When it comes to the screen, the 15.6” size is fairly standard. Considering the target market for the Acer ConceptD 7 Ezel, one would’ve expected a slightly larger screen size. This is especially noticeable when it comes to the 4K resolution at 3840x2160px display.

There’s no questioning the clarity of the display with such a high resolution. It’s good for movies, games and editing. The colour detail is also great, making it quite a rounded screen for all. The colours are bright and the contract is high, creating the perfect blend for visual aesthetic appeal.

When it comes to the statistics on paper, the unit produced a 76.7% colour gamut. This was quite a surprise, with most modern laptops achieving over 110% on average, sometimes up above 150% on the more premium units.

In terms of brightness, it measures 360 nits, which is just slightly above the average, which is good enough.

The panel is a touchscreen, which makes use of the Wacom EMR Pen. The response time is great but doesn’t come close to that of the S Pen on the Samsung Galaxy Note series. Still, designing and drawing using the pen was a joy. While the Acer ConceptD 7 Ezel has quite a number of configurations, the unit we received is on the lower end of the scale in terms of the full specification. That said, it offers the best option CPU. This is an Intel Core i7 10750H 2.6Ghz. This is supported by 16GB RAM and GeForce GTX 1650 Max-Q Design GPU.

The GPU featured is the lowest within the range. GPU options are available up to GeForce RTX 2080 Super Max-Q GPU, crossing over to a gaming laptop with ease.

The variant we received includes a 500GB WDC PC SN730 SDBQNTY drive and runs Windows 10 Pro 64-bit. As with other units in the range, it includes Acer’s propriety Concept D Palette software. This software allows users to adjust the device settings, split screens, monitor the hardware and more, all from a simple UI. With the specifications listed above, there’s no need to worry about the performances of the Acer ConceptD 7 Ezel.

Using the benchmark tests, the unit scored well, especially in comparison to other notable laptops. In real-world usage, it performs just as great. Its productivity is awesome with content creation just as painless.

With its high-end CPU, 16GB of RAM and GeForce GPU, video and image editing are a breeze. Loading and rendering times are swift, adding to the satisfaction in use. And if that’s not good enough for superusers, the CPU can be boosted to 5.1Ghz clock speed.

When switching to gaming, the GTX 1650 GPU was able to deliver solid 1080p graphics at reasonable frame rates on full settings. However, when switching it up to 4K gaming, the GPU wasn’t able to handle the load in full. You’ll need to decide whether you’d prefer full graphics on 1080p or lower graphics quality on a higher, 4K resolution. For users who wish to play 4K games, the Acer ConceptD 7 Ezel variant with the RTX 2080 Super GPU may be a good option. That, however, comes with an even more premium cost. Depending on your usage, the battery life lasts anywhere between three and eight hours unplugged. Using the laptop on power-saving mode from the start maximising the battery life to around the eight-hour mark.

Switching to performance mode, with brightness at 100%, running multiple tabs on the browser, WiFi and a few videos in the background, the battery life reduces to around three hours. This isn’t all that bad all things considered. Under normal loads, users can expect battery life to last about four to five hours. This is a great achievement for a convertible laptop.

When switching to gaming, the battery lasts around one to two hours. This is more or less in line with many other gaming laptops. Although that said, the variant received for review isn’t capable of playing 4K games on its GPU and screen. 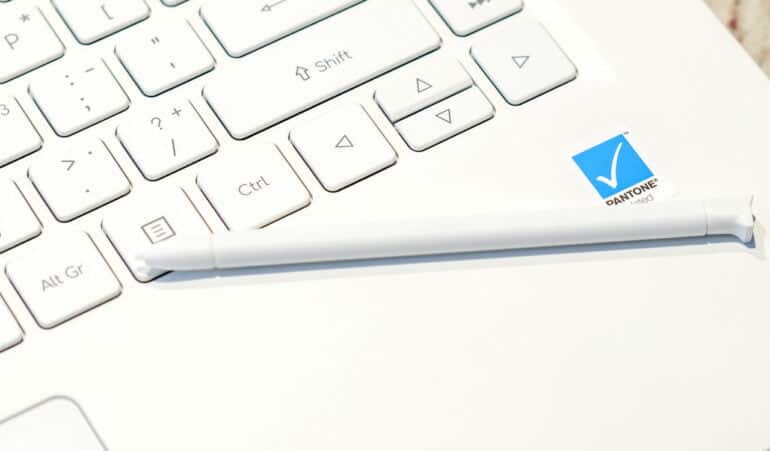 I’ve always loved the idea of 2-in-1 laptops. The Acer ConceptD 7 Ezel is the result of what would happen when such a laptop is paired with a gaming laptop and has a child. Although its unique hinge offers multiple use cases, it’s rather simple to use and effortless to switch between ea/ch when required.

If you’re looking for an ultra-portable laptop, this isn’t the one to choose. It’s a tad on the heavy side, but more than makes up for this in its functionality. If, however, you do not wish to choose between a powerful gaming laptop and something more in line for creatives, the Acer ConceptD 7 Ezel is the best of both worlds. As such, prospective buyers don’t have to compromise on the overall experience.

Pricing of the Acer ConceptD 7 Ezel starts at R24,999 for the base model.

The Aecr ConceptD 7 Ezel is a fascinating laptop. It’s a mix of worlds, offering multiple modes of usage to make work easier. This includes use cases for businessmen, gamers and even content creators. It’s a well-rounded device for the modern user.