So many movies, so little time. Choosing which film to watch can be a daunting task, and that’s why we’ve prepared this list for you.

If you’re an occasional film enjoyer or even if you are a die-hard cinephile, you’ll need this list of 15 movies that you should watch before you die.

Here are 15 must-watch movies (maybe the best movies of all time?). 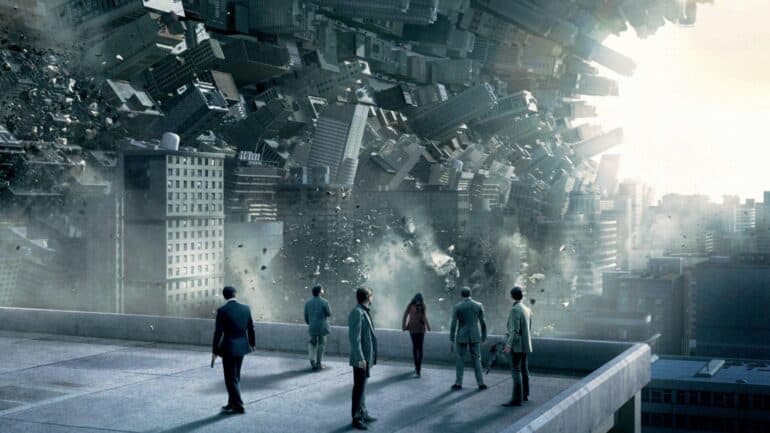 Christopher Nolan is a master when it comes to crafting some of the most mind-bending movies out there. If we’d have to pick a single one of his movies to use as a reference for what makes him so great as a filmmaker, that would definitely be 2010’s Inception.

Starring Leonardo DiCaprio, the movie follows a group of thieves who specialise in stealing corporate secrets by inserting themselves in the dreams of their victims. It sounds like something that Freddy Krueger might be doing in his golden years.

The story of a man who braves isolation for years, Cast Away is an impressively touching story that manages to get its point across with minimal dialogue and introduces one of the best actors who’s also a volleyball.

Cast Away stars Tom Hanks as a dedicated FedEx executive who finds himself stranded on a deserted island after his plane crashes. Directed by Robert Zemeckis, this film caused a surge in job applications for FedEx – a fact that’s made even better due to the fact that FedEx didn’t pay the filmmakers for their role in the plot.

Whether you believe that Die Hard is a Christmas movie or not, there’s no denying that it is one of the best action films ever made. Everyone has heard the story of John McClane and the time he saved the Nakatomi Plaza barefooted, and how the first film is much better than any of its sequels.

It’s thanks to Die Hard that Bruce Willis became an overnight action star. Even more impressive was Willis’ salary: the actor received $5 million for playing NYPD Detective John McClane, a sum that was approved by the then Fox president, Rupert Murdoch.

We’ve all had bad days – and what happens when an otherwise good person is pushed beyond the breaking point? You get a movie like Falling Down, that’s what happens. A poignant look into the chaotic LA of the nineties, this might be director Joel Schumacher’s finest film.

The movie stars Michael Douglas as a man that, frustrated by society’s flaws, lashes out against anyone that dares to enrage him. If you’re a music fan, you might recognize this movie as the inspiration for the Foo Fighter’s video of the song “Walk.” It also inspired the Iron Maiden song “Man on the Edge.”

One of the best things about movies is that they help us experience stories that are beyond the boundaries of our normal lives. However, some people lead lives that are larger than life, and that’s precisely what Big Fish is about.

Directed by Tim Burton, this movie is unlike anything the goth filmmaker had done before. A touching story that threads the fine line between fact and fiction, Big Fish celebrates the odd, the bizarre, and the utterly lovable parts of life. Definitely, a movie that you must see at least once.

What else is left to say about Rocky that hasn’t been said before? One of the best sports films ever made, this movie about the struggle of a small-time boxer getting a chance to fight in the bout of his life is all sorts of inspirational, especially if you need to run up a long stairway, for some reason.

Written and starring Sylvester Stallone, Rocky and its sequels have become an important piece of American pop culture ever since its release in 1976. If you can only watch a single film in the franchise, then definitely go for the first one. However, it’s highly recommended to watch the first four films, and also their excellent sequel, Creed.

Based on the best-selling novel by William Peter Blatty, watching The Exorcist is truly an endurance exercise. Tense, macabre, and one of the scariest films of the seventies, there was no movie of its time that dared to go as far as The Exorcist.

Even by today’s standards, the movie remains sufficiently scary. Thanks to the wonderful performances of Linda Blair and Jason Miller, the story of young Regan’s possession can still scare audiences around the world. Also worthy of mention is Max von Sydow’s acting as Father Lankester Merrin – the classical actor was so dumbfounded by Blair’s foul-mouthed character that he nearly forgot all of his lines! 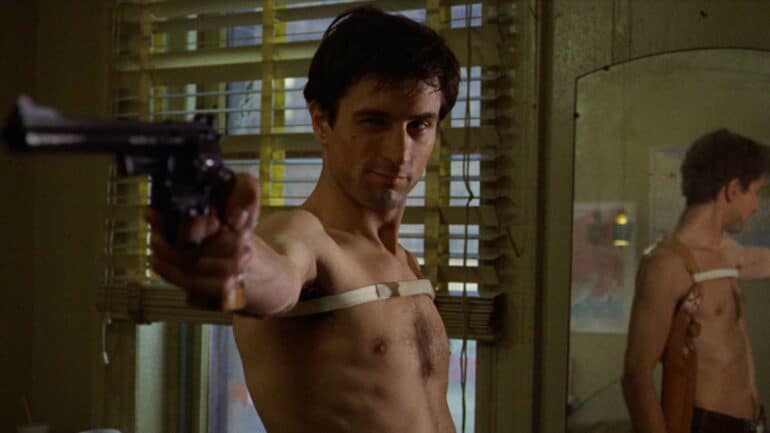 In a society gone mad, who’s to blame a man for going over the edge? That might sound a bit too extreme, but that’s just the “extreme” aspects of modern society that Martin Scorsese wanted to explore with his classic Taxi Driver. Starring Robert De Niro and a very young Jodie Foster.

De Niro plays Travis Bickle, a PTSD-ridden veteran that tries to make ends meet working as a taxi driver. However, as he cruises the streets of NYC, he notices that society is crumbling down, and corrupt politicians and abusive pimps now rule the world. Taxi Driver is cruel, relentless, and is absolutely a movie you should see.

Epic historical dramas are something of a rarity these days, and the ones that are good are even scarcer. That’s why 2000’s Gladiator remains one of the best period pieces ever made, and we have Ridley Scott’s directing and Rusell Crowe’s spectacular performance to thank for it.

Of course, we can’t forget about Joaquin Phoenix’s character, Commodus. This tyrannical egomaniac might be one of the best villains ever seen on film, leaving audiences on the verge of cheering when he finally gets what he deserves. Truly a masterful movie about duty, survival, and the raw brutality of the gladiators of old.

Indiana Jones and the Raiders of the Lost Ark is, to put it short, the quintessential adventure movie. Thrilling and chock full of excitement, Steven Spielberg absolutely nailed it when he made this film, and its sequels are, for the most part, just as good as the first one.

Indy’s iconic persona and his easygoing attitude might be a product of Harrison Ford’s own cool guy attitude during the eighties. Even if you never watch any of the other Indiana Jones films, definitely give the first one a chance.

Ok, this might be cheating a bit, but there’s just no way of watching just a single The Lord of the Rings movie. The cinematic masterpiece that was Peter Jackson’s epic trilogy is unlike any other book-to-film adaptation ever done before – or since.

The adventures of Frodo and his companions have become all the more popular thanks to this cinematic trilogy. What once was a trio of fantasy novels reserved for “nerds” and social outcasts suddenly became a mainstream phenomenon. Watching these films is truly a delightful experience, and it’s something that any film buff should do at least once in their life. 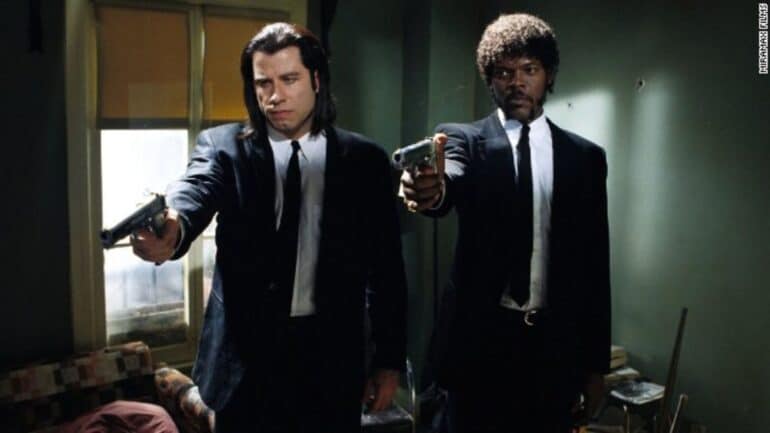 Quentin Tarantino’s first real masterpiece, Pulp Fiction introduced many of the qualities that would become a trademark of his later work. Not to rain on Reservoir Dogs’ parade, but Pulp Fiction is simply a better movie, with more endearing characters and a more intriguing plot.

Starring an all-star cast of Hollywood VIPs, Pulp Fiction is a celebration of all the things that make going to the movies so great. This is Tarantino’s first love letter to the art of filmmaking, and it should be seen by anyone that has even the faintest interest in movies.

1985’s Back to the Future might not be one of the most technically impressive films out there, but it is absolutely a movie that you should see at least once. A fun and entertaining sci-fi comedy that exudes the spirit of the eighties, Back to the Future is one of the best movies directed by Robert Zemeckis.

Marty McFly and Doc Brown have become iconic characters in American pop culture, and so has the iconic DeLorean. Ever since its release, there’s hardly been a time-travelling film that doesn’t reference Back to the Future or its sequels. Also, this trilogy really aced the art of the cliffhanger.

It might sound weird to choose the middle point of a trilogy as the movie you should watch, but The Empire Strikes Back is Star Wars at its best. This film features many of the iconic moments that defined the series, including Luke’s Jedi training and Darth Vader’s “I am your father” line.

If you could only watch one sci-fi movie in your life, The Empire Strikes Back would be the best choice. It contains everything a great adventure movie should have, including memorable characters, a spectacular setting, and a memorable plot that will stay with you long after you’ve seen the entire Star Wars franchise. Even if you think that the plot moves a bit too slowly, the wonderfully written dialogue and the intensity of each actor’s work are simply flawless. Don’t let the long runtime intimidate you: The Godfather is a movie that moves at its own rhythm. This is the very definition of a must-see film.

What would you consider the best movies? What must-watch movie favourites have we left off the list?