Sad news for Agent Smith fans. Esteemed Australian actor Hugo Weaving, who played Neo’s nemesis and the antagonist in the original films, will not be returning for The Matrix 4.

Weaving confirmed the news during a recent interview, revealing that, although he did talk with director Lana Wachowski about returning, a scheduling conflict has led to his departure from the film. 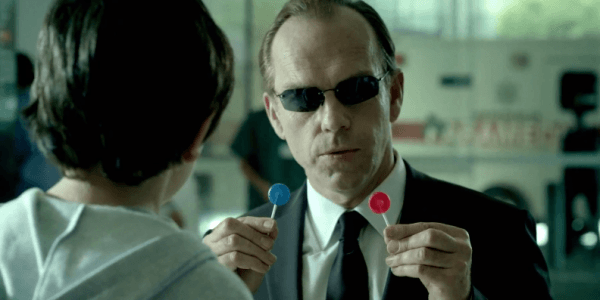 ‘“The Matrix” is a very different story. It’s unfortunate but, actually, I had this offer [for The Visit] and then the offer came from The Matrix, so I knew it was happening but I didn’t have dates. I thought [I] could do both and it took eight weeks to work out that the dates would work – I held off on accepting [a role in The Visit during that time]. I was in touch with [director] Lana Wachowski, but, in the end, she decided that the dates weren’t going to work. So we’d sorted the dates and then she sort of changed her mind. They’re pushing on ahead without me.’

The Matrix 4, which is described by Warner Bros. as an “all-new film, returning audiences to the reality-bending universe”, premieres on the same day as John Wick 4, May 20, 2021. The cast includes Keanu Reeves, Carrie-Anne Moss and Jada Pinkett Smith, with Yahya Abdul-Mateen II, Neil Patrick Harris, and Jonathan Groff.