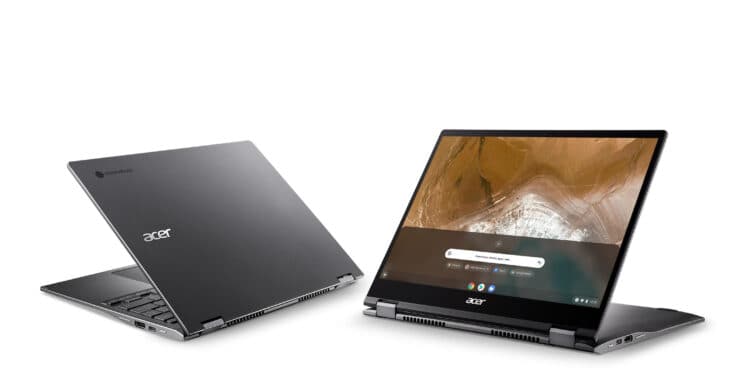 With the Acer Chromebook Spin 713, Acer has designed and built a very good laptop.

At the end of 2020, Acer held its next@acer event in which it launched quite a few new laptops, specifically focusing on gaming and content creation. From that event, the brand launched its ConceptD range, from which I reviewed the ConceptD 7 Pro and the ConceptD 7 Ezel.

Fast-forward to May 2021 the brand hosted another next@acer event, with the “New Perspective” theme. The event saw the release of a host of new Acer Chromebook laptops. After a few global delays, the units landed in South Africa, ready for review prior to hitting the shelves across the country.

After a decade on the market, I finally got to review a Chromebook laptop. It’s been a long time coming and, as such, there was plenty of excitement on my end. With many leading manufacturers since having also started producing their respective ranges, and with many iterations over the 10 years, there has been quite a few changes on the OS-based laptop.

With Windows and MacOS still dominating the industry, how does the Acer Chromebook Spin 713 compare and is it worth the average user spending their hard-earned cash on one of the new Acer units?

The Acer Chromebook Spin 713 is slated as an affordable laptop. That said, there’s no cheapness about the build quality. Acer has used premium materials to finish the build in the form of aluminium. Compared to many other laptops in this price range using plastic instead, this is a welcome change.

The premium build doesn’t end there either. It has MIL-STD 810G certification, having passed the military-grade testing. This is in part thanks to the additional Gorilla Glass screen, as well as the build of the keyboard and touchpad. One of these tests is a 1.2m (4ft) drop, which has also passed.

As with other Spin laptops in the series, another aspect of its quality lies in the hinges. It allows for 180° flex, meaning that it can be used in both a laptop and tablet mode.

Despite only having a 13.5” screen, its dimensions are still quite large. It measures 299.72×236.22×17.01mm. It’s not bad, but one would expect a slightly smaller chassis. It’s also fairly chunky with a 1.36KG weight. Again, for a laptop with its screen size, this is on the heavier side of things.

As a result of the size and heft, it makes tablet mode a bit trickier to manage. That said, Acer offers a separately purchased stylus. This isn’t included in the packaging of the Spin 713, which is a pity. This would have been an extra selling point, as it allows for easier content creation when lying the unit flat on a surface, over the conventional tablet mode.

Overall, while the quality is great and the flexible hinges are solid, it is quite bland. The range has a steel-grey finish and has a fairly squared finish. There are very few accents or features to stand out.

When it comes to the connectivity options, the Spin 713 has a decent offering. There are two USB Type-C ports with Thunderbolt 4 support. Additionally, there’s an older USB 3.2 Type-A port for any users still using the previous-generation USB devices.

It offers a full-sized HDMI port, which is always useful for users with a second monitor. And for content creators, there’s also a microSD port. There aren’t many modern laptops offering this by default, so it’s quite refreshing to see the return again. It’s handy when wanting to copy photos from your camera without having to worry about cables and other connectivity options.

In terms of wireless connectivity, the Acer Chromebook Spin 713 offers both Wi-Fi 6, as well as Bluetooth 5.0. These two modern wireless standards make it easier to pair with devices while also offering

As mentioned previously, the unit has a 13.5” screen. This is slightly bigger than the more conventional 13.3” screens we often see on the market. The extra 0.2” doesn’t seem like much on paper, but that extra horizontal real estate adds an additional 18% viewing area. This is known as a VertiView Display.

That 18% is also more horizontal than standard, making it wider for users who work with spreadsheets and other business documentation. The screen dimensions are 2,256×1,504px. It is adjustable in the settings menu, but there’s no need to change it from the default. Default resolution is 1,410x940px, which is good enough. It can be turned up if you want less pixelisation.

This 3:2 aspect ratio is rare, which will make watching certain movies a bit strange, but for many creatives, it’s nice to have. The viewing is crisp with the colours very well saturated. This makes it great for both viewing and creating.

Since the unit is capable of tablet mode, it’s trivial to point out its touchscreen support. The responsiveness is great. It’s very near-immediate sync as you touch, making it great for drawing and other similar artistic support.

The brightness is not the best around, although I didn’t have any issues anywhere around the house, even at midday with the curtains drawn. It gets the job done. 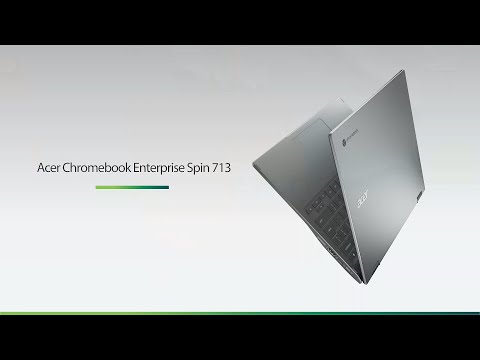 Currently, there are two models available to purchase. The biggest difference between the two models is the Intel® Core® i5-1135G7 versus the Intel® Core™ i3-10110U. Both of these processes feature Project Athena standards. This adds to how quick the laptops boot up from sleep, as well as extended battery life.

Being a Chromebook, it runs off Google’s Chrome OS instead of the, much more conventional, Windows units. The OS is very lightweight, which means that it puts that extra power under the hood to good use.

As mentioned above, the Acer Chromebook Spin 713 runs on a lightweight Chrome OS, which means it has more than enough processing power to burn. It breezes through tasks without any issue and sometimes it surprised me how quickly apps opened compared to Windows. The apps might also be fairly lightweight itself, given that many are based on Android specifications.

While it may be very lightweight, Chrome OS is a bit limited in terms of the availability of conventional business apps. Yes, the likes of Office suite and others are readily available, but my image software and the likes aren’t easily replaced and required a bit of researching before I found similar.

This is the biggest hurdle to climb when it comes to adjusting from Windows to Chrome OS. As a result, it may not be in the best interest of novice users. It takes quite a bit of work to set up a similar environment in addition to the apps. That said, there are plenty of apps to download from the Play Store.

What impressed me the most was the longevity of the battery. For the most part, it is a conventional laptop. However, given Intel’s Evo certification, as well as the lightweight Chrome OS, battery life is extended quite well. Under conventional use, I could easily power between 10 and 12 hours daily. When putting a bit more load like watching movies, it averages around 10 hours. That’s still impressive.

When it comes to gaming, you’re mostly left with Android-based, mobile games. This is good for quick time-wasters but doesn’t offer much in the way of normal gaming for hardcore gamers. This isn’t the unit for that.

Should You Buy the Acer Chromebook Spin 713?

There’s a lot to enjoy about the Acer Chromebook Spin 713 laptop. It takes some adjusting to when you’re used to Windows, macOS or Linux machines. That said, it’s fairly light, making the most of its performance while having extensive battery life. It’s convenient and flexible.

If you’re used to Android as your daily drive, it won’t be too much different. Apart from missing a few of the more powerful apps for content creators, you’ll be able to find plenty of apps from Google Play to make use of.

You can check out Acer’s range of Chromebook laptops via its shopacer.co.za website. Pricing for the two units is great as well, at R14,999 for the Core i3 and R16,999 for the i5 units.

Acer has designed and built a very good Chromebook. The Acer Chromebook Spin 713 offers quite a bit in the way of flexibility and power, while also being able to power you through a complete work day and more. If not for some adjusting and missing one or two conventional software, it would be quite an offering for many businesses and content creators. That said, it’s quite well-priced, so there is incentive to switch.