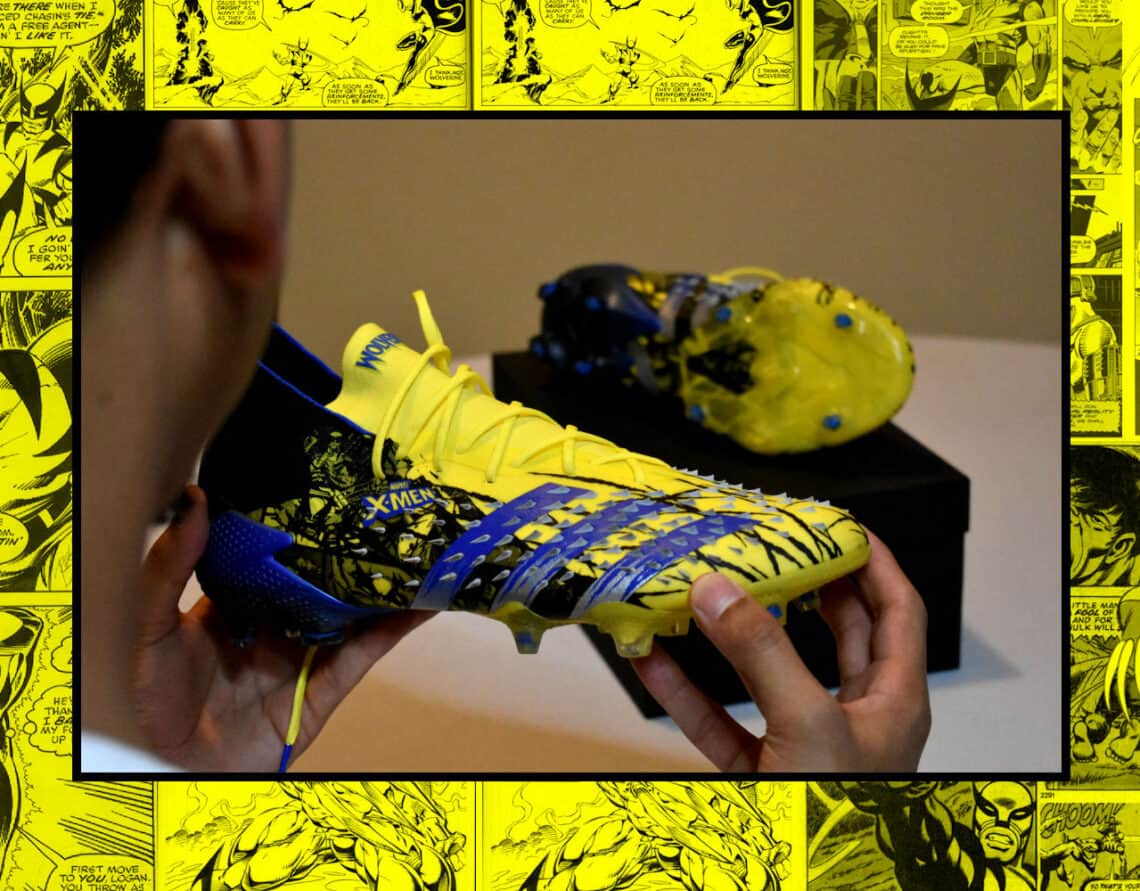 At the start of 2021, adidas announced the all-new Predator Freak .1 football boot. The brand took things up a notch with the release of the adidas x Marvel X-Men Predator Freak drop, which features Wolverine and Cyclops colourways.

I was already excited about the original adidas Predator Freak. When the X-Men pack was announced, the excitement went through the roof. Having recently received the Wolverine pack, I was pretty amazed at the level of detail, even before hitting the pitch. 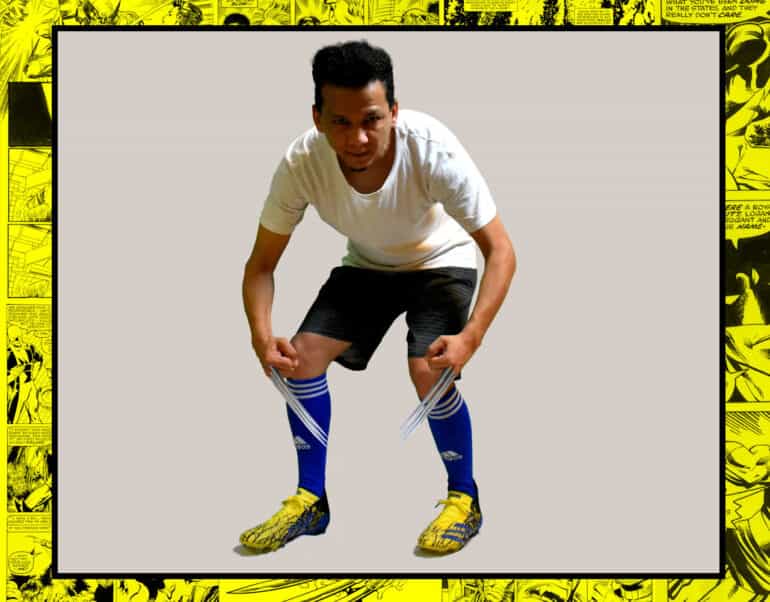 If there was ever a football boot fit for Wolverine, it would be the adidas Predator Freak. The boot was unveiled in January 2021 with its DEMONSKIN spike across the upper. This is one of the first most notable aspects of the adidas x Marvel X-Men Predator Freak’s design. But, despite its menacing aesthetic, it isn’t dangerous and is quite soft to the touch.

The Wolverine colourway has quite a few hidden gems on the boot. Starting with the yellow, black and blue colours, which is reminiscent of the character’s comic and cartoon appearance.

Yellow is the predominant colour, running down from the faux tongue to the forefoot and again at the front of the sole underneath. The black portion runs across the centre to the rear. The overlays and text are primarily in blue, to create the perfect mix of contrasting bold colours.

The colourway would’ve already been pleasing to many Marvel and X-Men fans, but its true perfection stems from its attention to the finer details. Across the black, adidas has added a few Wolverine comic strips. This runs from both sides across the bottom to reflect the flow of a comic book. Then, on the yellow portion, you’ll also notice quite a bit of black scratches, no doubt from the claws of Wolverine himself.

To round off the design, adidas has included the X-Men and Wolverine branding to that of the Predator logo on the rear. The Wolverine logo is featured on the front, at the top of the tongue. The Marvel X-Men logo is featured on the lateral sides of both boots. In addition, you have the DEMONSKIN branding on the medial sides. Rounding off the logos are the various elements on the heel at the rear. Starting from the bottom on the left boot you have the Predator logo, Wolverine’s face, three claw marks and the adidas logo at a 90° angle. On the right boot, we start off again with the Predator logo. This time it’s the X-Men logo, followed by the scratches and adidas logo. 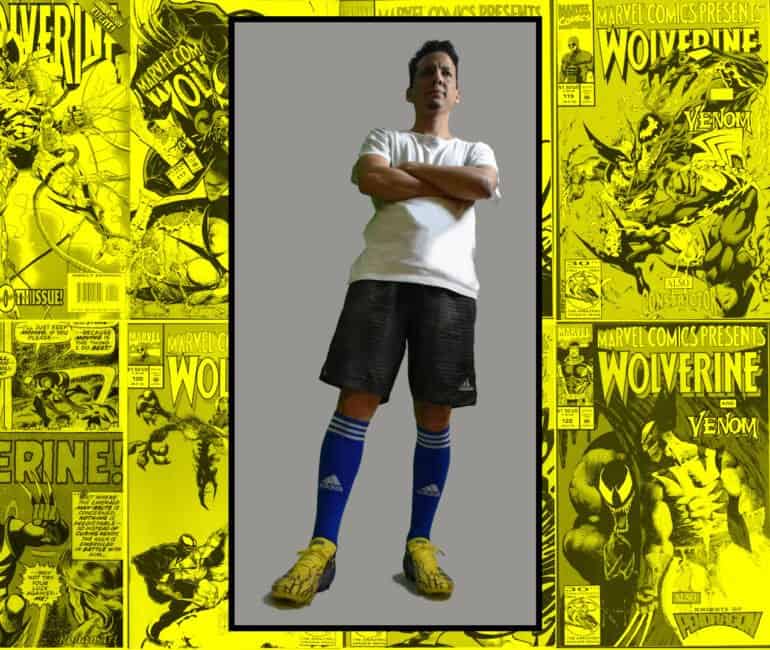 One key aspect of any football boot is the fit. This has been a key focus for most brands in recent years and it’s no different with adidas. The silhouette is very similarly designed to the shape of the previous adidas Predator Mutator. This presents itself in a slender hourglass shape, larger at the front and rear and tighter in the midfoot.

What took me by surprise was how snug the fit was. This is felt mostly in the midfoot – reference to the hourglass shape previously mentioned, as well as the PRIMEKNIT upper. If you’re not used to this, it takes a bit of wearing in before it becomes completely comfortable. That said, you’re not going to be running onto the pitch with brand new boots for a big game. It’s not quite as bad as a pair of new skates before the competition, but you’ll definitely feel it.

Another of the aspects you’ll notice is how the collar hugs your ankles. The adidas x Marvel X-Men Predator Freak features an elongated collar, which resembles that of Wolverine’s mask with the pointed ears.

Apart from the convenient aesthetic tie-in, there’s a dual purpose for this. Firstly, it provides a more locked feel when running around. You won’t have that awkward feeling of your foot possibly sliding out at the heel. Secondly, it makes it so much easier to get in and out of. Given the snug fit, you’ll need a bit of assistance to pull your foot into the boot.

As with many other sneakers that include the PRIMEKNIT upper, you don’t really need the laces. Part of me feels it’s mostly for show. I would imagine that there are a few who would need it, but I can’t see there being too many. The boot fits like a glove.

Even with all the focus on the design and aesthetics, there aren’t any shortcuts on taken. The quality is second to none. Whether it’s the PRIMEKNIT sock material or the DEMONSKIN rubber, everything screams premium.

The adidas x Marvel X-Men Predator Freak is both great in hand and on foot. The quality materials feel good to touch. When you run your hands over the DEMONSKIN rubber, it doesn’t feel as rough as it looks. If anything, it’s fairly soft.

The PRIMEKNIT material feels like a double-thick sock while also still remaining soft, too. It stretches as it should but still keeps your foot snug.

Rounding off the build, there’s the CONTROLFRAME outsole. It’s split into two sections, on the forefoot and on the heel. It’s a unique set up. The mid-section is hardened, so you needn’t worry about the soft part of your foot taking strain when in action. Again here, the materials are premium. It’s super sturdy with zero play or flex. This gives you peace of mind when hitting the field. 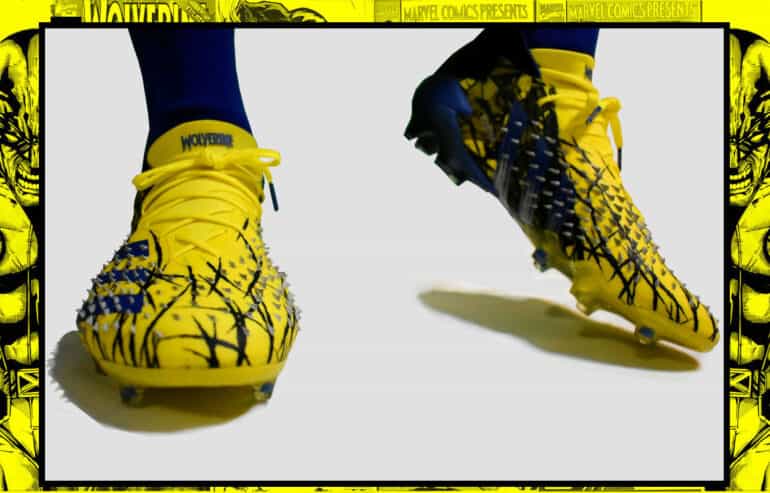 The DEMONSKIN technology isn’t just for show. Its menacing appearance serves the valuable purpose of bringing more control to the wearer. It runs from the lateral and medial sides towards the forefoot. What it does is provide quite a lot of grip when attempting to control a football.

After running around for a few minutes to stretch out the fabric on first wear, I switched to a few drills. This included both shooting and control practices.

Starting off the control, it’s quite impressive. Over the past three years, I’ve had the pleasure of trying out quite a number of boots across the three major brands. Without sounding bias, the control of the adidas Predator Freak is second to none. With a few cross-field passes, I was able to improve my first touch significantly.

Once I got the hang of it, I attempted a few control options I wouldn’t dare to in a game. This was the single touch, on the bounce dead control, as well as the airball, dead control. Typically, for the air ball, I would bring it down on the bounce. For the single touch, more often than not it would land within a 30cm radius. That’s very good under normal circumstances. However, with the adidas Predator Freak, I was able to control this on the spot. My success rate jumped from around 50% to about 80%. I was just as impressed with the airball control, with the boot allowing me to control the ball in the air, and bring it down on my foot to land in front of me as I landed.

It would be hard for me to go back to a normal boot after a few runs with the adidas x Marvel X-Men Predator Freak. Think of Paul Pogba and his level of in-game control. While it does make it easier to perform these touches, I found that it also helped me develop these skills further. Switching between a more conventional boot and the Freak, I could tell that my confidence had increased in performance for those advanced controls.

One of the topics on the previous adidas Predator Mutator was that the new diamond-shaped studs meant that the players wouldn’t have the same close-touch feel as with regular boots. For some, it felt unnatural. With the new DEMONSKIN, the studs are spaced wider apart in a forward-shaped motion, while also being a lot softer. This allows the ball to come onto the foot much easier, bringing back that close-touch feel.

When it comes to shooting, it wasn’t as clear progression as with the control. With the tighter midfoot, the forefoot felt a bit loose, even though it wasn’t really. I used the first shooting drill session to work on the feel for the boot. It takes some getting used to in getting your eye in.

Right off the bat, however, I was able to shoot a bit harder than normal. After two or three sessions, when the accuracy matched the added power, it again felt as if there was great progression within only a short period of time, having switched to the new boots. What I found most notable is that I was able to achieve a bit more bend on the ball as well when I wanted to. I would put this down to the DEMONSKIN again, adding additional grip to the ball as you hit. This is of great help to those knuckleball shots when attempting to get more late dip.

Most of the emphasis will definitely be placed on the boots DEMONSKIN technology on the forefoot. But that doesn’t mean adidas hasn’t improved on other areas as well. The traction is derived from the CONTROLFRAME technology on the outsole. This is split into two portions, one of the forefoot and another on the heel.

There are 11 studs on the outsole, which provides most of the traction off the grass as you need it. In addition to this, however, adidas has extended the DEMONSKIN approach here as well. Although not as pronounced, the diamond-shaped pattern provides more traction when those studs have dug into the ground as you burst off. This gives you more purchase off the surface as you accelerate.

Is the adidas x Marvel X-Men Predator Freak Worth Buying?

There’s a lot to be excited about on the adidas x Marvel X-Men Predator Freak .1 Wolverine pack. Despite the complicated name and looks, it’s a fairly simple design overall. There are three main aspects to the build. That’s the PRIMEKNIT upper, the CONTROLFRAME outsole and the DEMONSKIN technology.

These three portions of the adidas Predator Freak make it quite a remarkable football boot for any player. Not only does it make things easier to perform while wearing the boot, it also improves overall training when you’re not using it.

There’s an alternative option for purchasing this boot – as a collector’s item. It’s not going to have the high demand of your standard YEEZY drop, but it looks great with the X-Men themed aesthetics. It’ll look great among your collection of sneakers or even your figurines.

For me, I like the idea of it being on my feet, as well as part of my collection.

Whether you're going to be playing football with the adidas x Marvel X-Men Predator Freak .1 or display it as one of your figurine collectables, the football boot is great. From the colour scheme and detailing to the three main components, it's of premium quality, making performance so much easier.