Yonder: The Cloud Catcher Chronicles Review – Exploration Without All the Sword Swinging

For the past few days, I’ve been exploring the island of Gemea in Yonder: The Cloud Catcher Chronicles. I’ve had to look for lost cats, smash a ton of rocks and even make friends with some of the weird and wonderful local wildlife. During this adventure, I never once swung a sword or pulled a trigger which, to be honest, I found quite refreshing. In a time when most games want you to kill this many of X or eliminate the opposing team, playing a game that merely tasks you with slowly exploring your surroundings and helping the locals is a rare sight. In Yonder, you play the titular hero who finds themselves shipwrecked on the island of Gemea. While the island is a beautiful and peaceful place, a physical manifestation of darkness, called the Murk, has besieged it. It’s up to you, the hero, to find out what caused the Murk to appear and rid the island of its dark influence.

So how does a hero defeat an evil such as the Murk without weapons? With help from the adorable yet powerful sprites that are scattered across Gamea, of course. Part of your overarching quest in Yonder: The Cloud Catcher Chronicles is to find these hidden sprites and
use them to dissipate the Murk, which in turn will unlock more areas to explore.

While most of your time playing Yonder will be spent exploring the island’s various biomes, as is the case with many open world games, you will also be running around quite a bit helping the island’s many inhabitants. It seems that almost everyone on the island of Gemea has some item, resource or missing cat for you to collect and find. This means that most of the quest you will be completing will consist of finding X and bring it back to Y.

While the wonderment of exploration did stop these quests from initially feeling reparative, once this wonderment dissipated these quests became more of a chore. Now don’t get me wrong, for a game developed by only three people, there is quite a bit to do on the island. It’s just a shame that most of it involves fetching stuff for inpatient villagers. While not fetching stuff, players will spend most of their time smashing rocks, chopping trees and foraging for all kinds of resources with which to craft various items. Crafting serves two purposes. The first is that crafting certain items will help you level up with the various guilds of the island, and complete some of your quests. The second is when setting up a farm, players are able to craft the various structures needed to house their adorable animals.

While on the subject of animals, the wildlife on Gamea is unlike anything you have seen. From groffles to fabbits, each creature can be convinced to follow you back to your farm by giving them the appropriate snack. Once these creatures are settled on your farm they will start to produce various resources like milk or clay. It’s not the most complicated farming system out there but it does just enough to keep you invested. What did, however, prevent me from fully embracing the life of a groffle farmer was the game’s complex fast travel system. As you progress through the game you will find yourself traveling more and more between different parts of the island. This wouldn’t have been too much of a problem if there was just a quicker way to fast travel from town to town or farm to farm. Having no monsters to slay means that you won’t be picking up endless amounts of gold and loot. So how does the game’s economy function without something as important as gold? The economy on Gamea runs completely on bartering. This system takes a while to get the hang of but what it basically boils down to is that each item and resources have a value attributed to it. So, say for instance, if you want to acquire 10 nails, each nail has a value of 2, this means that you could exchange 20 wood which each have a value of 1 for the 10 nails. This might sound a bit convoluted but, once I got the hang of it, I was bartering like I’ve been doing it for years. Yonder: The Cloud Catcher Chronicles is probably one of the most beautiful, and accessible open world games out there. The lack of combat means that you don’t have to continually look over your shoulder in fear of being hit over the head by a sword. The freedom of being able to explore and uncover the secrets of Gamea at your own pace can be cathartic at times.

With its beautiful pastel colored world and unbelievably adorable creatures, Yonder: The Cloud Catcher Chronicles is a game I really wanted to fall in love with. And while I did end up liking the game, the repetitive nature of the game’s quests meant that I didn’t find myself falling head over heels for it. There is a lot of potential locked away in the world and lore that the game weaves, which makes me excited to see what the future holds for developer Prideful Sloth.

If you feel like humouring the explorer inside of you and don’t want to get bogged down by combat, a trip to the island of Gamea might just be for you. 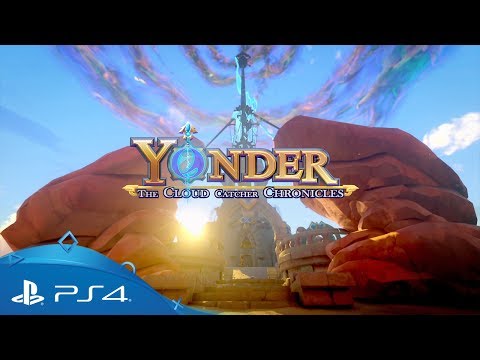