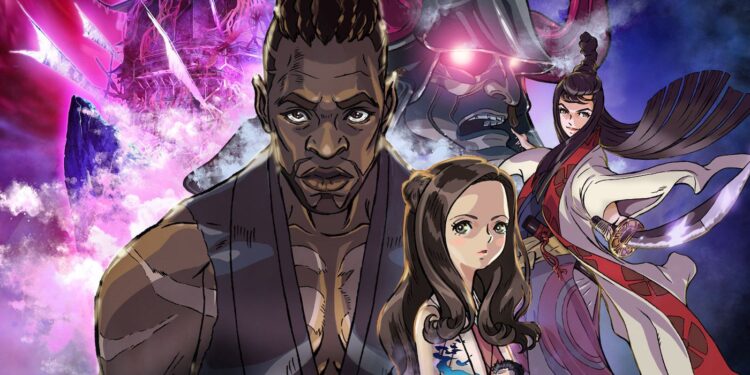 With Yasuke, Netflix and MAPPA Studios (Jujutsu Kaisen, Attack on Titan), along with director and creator LeSean Thomas (The Boondocks, Cannon Busters), have created an epic sci-fi, fantasy tale that blends fact and fiction in a modern and thought-provoking way.

Voiced by the Academy Award-nominated LaKeith Stanfield (Judas and the Black Messiah, Atlanta), the anime tells the story of real-life African samurai living during the 16th century.

And while Yasuke’s story has been told a few times previously through books and video games, this new project highlights some of the fantasy elements of the legend.

Once upon a time in Japan…

Netflix’s Yasuke opens in an alternate war-torn Japan (1582) — on the battlefield during the daimyo wars. This is no ordinary fight, with magic and mechas taking centre stage.

In the Honno-Ji Temple, Yasuke and Nobunaga Oda argue over how to deal with their loss and life choices. Nobunaga’s army is pitted against the Dark General’s Dark Army, who have gained significant power from a supernatural force. With the temple overrun and burning, Yasuke wishes to flee, but Nobunaga has decided to commit seppuku (ritual suicide).

Fast forward 20 years, Yasuke is now going by Yassan, a boatsman in a small village. Minding his business and doing daily runs on the river to visit the local inn, the former samurai is haunted by his past.

When Ichika (Gwendoline Yeo), a singer at the inn, seeks out his services to take her ill but powerful daughter Saki (Maya Tanida) up north to a mysterious doctor, Yasuke is forced to comply.

The complex story of Yasuke unravels throughout the rest of the episodes. This includes flashbacks to how the African samurai came to be the retainer of Nobunaga, which sees old and new philosophies clashing.

Meanwhile, in the present, the anime series focuses on the journey and friendship of Yasuke and Saki. Even though it was forged out of necessity, this feels natural and their relationship strengthens as they face enemies and obstacles during their quest.

Although it has become a well-worn trope, I personally enjoyed the interplay of the reluctant, gruff father figure and the naïve, outspoken young girl discovering her psychic powers.

When Yasuke wields his sword, the action is focused on the razor-sharp blade motions and balletic blood sprays. The battles and duels are beautifully elevated by the editing. The frame follows Yasuke tightly putting you right in the middle of each fight.

This is a Netflix show that doesn’t hold back on the gore or violence. “Pain and blood” are words used by both Nobunaga and Yasuke throughout and sum up the intensity of the action. On the battlefield, it’s The Lord of the Rings meets Pacific Rim.

The Grammy award-winning Flying Lotus has crafted a soundtrack that mixes modern beats with familiar elemental music. Like the characters, the music evolves with each new episode.

The opening credits, “Black Gold”, and ending credits, “Between Memories”, paired with the stunning animation, really set the mood for the show. In fact, the latter is now possibly my new favourite ending credit song of any anime (and the bar is high!).

Beyond that, LaKeith Stanfield’s voice shifts to match each part of Yasuke’s life superbly, from his younger years as a samurai through to his more turbulent years as a boatsman.

Too much to see and not enough time.

LeSean Thomas has created a beautiful world with interesting characters and a strong season arc that leaves you wanting more. And therein lies the problem. You do want more.

All of the elements are crammed into 6 explosive episodes that certainly keep you on your toes but leave little to no room for the supporting characters, or for the natural development of the story.

I truly believe that a 10-episode season of Netflix’s Yasuke could have provided breathing space to really flesh out the characters and spend more time on the world-building. Some emotional moments fall a little flat as we simply have not been given enough time to form an attachment.

So, should you watch Yasuke?

Accompanied by a great soundtrack and stunning animation, Yasuke creates a unique world full of memorable characters. Despite its flaws, the journey is fun and well worth your time. It’s a refreshing adaption that doesn’t shy away from social commentary and the rhetoric that comes with a black man becoming a samurai.

All 6 episodes of Yasuke will be available on the 29th of April on Netflix.