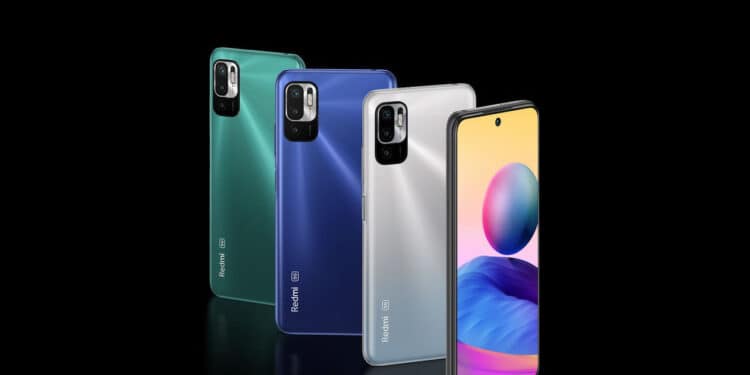 Over the years, we’ve focused heavily on the battle for supremacy for the range of flagship smartphones. However, with the ever-increasing pricing and mid-range units now offering almost as much value in terms of features, there has been a huge push for superiority in the South African market. Xiaomi has been one of the brands that have featured below the radar in the region for many years. With the Xiaomi Mi Redmi Note 10 5G, the brand aims to be a contender for this title.

With Huawei’s challenges with Google and its switch to AppGallery as a replacement for Play Store, other brands have been boosted when entering the market. Over the next few weeks, we’ll take a look at the many options you as the consumer has in this space.

Let’s take a look at what the Xiaomi Mi Redmi Note 10 has to offer to this base. 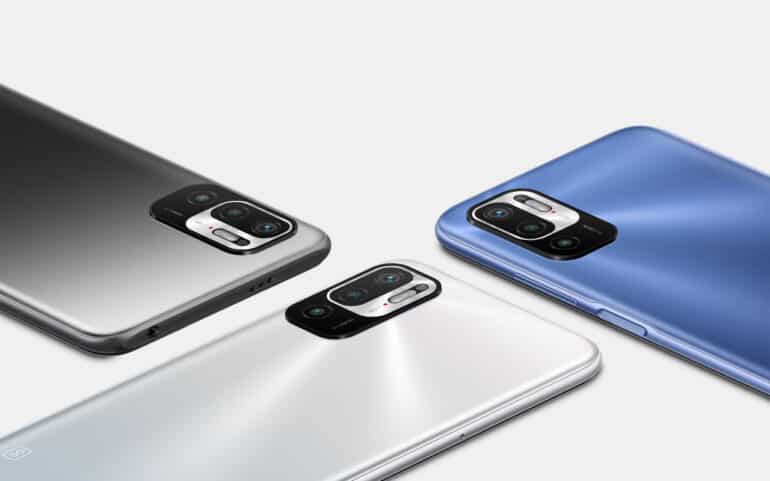 While each aspect of the device is important to achieving dominance, there’s no doubt that looks play one of the biggest roles. Customers shop with their eyes first, so those first impressions are crucial. This is especially true when you’re not familiar with a new or change of brand.

The Xiaomi Mi Redmi Note 10 definitely looks the part. With many other brands looking to cut corners to reduce pricing, we’re often left with a piece of plastic and rubber that doesn’t look or feel great. But the Redmi Note 10 is far classier.

As with many phones, they’ll be indistinguishable from the front. This is especially true when viewing with the screen off, where you also won’t notice larger-chinned units. The main design features are viewed on the rear and the sides of the unit. Although it may still be plastic, its colour themes look amazing. The 5G model includes an additional colour over the standard model – Nighttime Blue. This was the unit we received for review.

It has a silky matte look about it, hiding the plastic material build. It still collects the occasional fingerprint every time you pick it up to use, but it’s not very visible compared to other models.

Another of the big selling points on this model is the grouping of the camera lenses. The module is comparable to that of the more premium phones, while also being neatly tucked together so it’s not obtrusive. It may seem trivial, but when you start comparing this to other mid-range units, you’ll notice a clear distinction.

In terms of the more straightforward stats, the unit boasts an 8.9mm thickness while weighing in at 190g. Unlike other smartphones in the category, it does feel on the heavier side, but it also feels far more robust overall. The build quality makes carrying that extra 30-40g all the more worthwhile.

As is conventional for similar models, it also houses its fingerprint sensor within the power button. This was standard for flagships of 3-4 years back before switching to the more elegant in-display readers. But we can live with that compromise given the budget.

One standout feature of the Redmi Note 10 is its IR blaster on the top of the unit. This sets it apart from other units, as it doubles as a remote for your nearby devices, which can be customised via the built-in Mi Remote app. 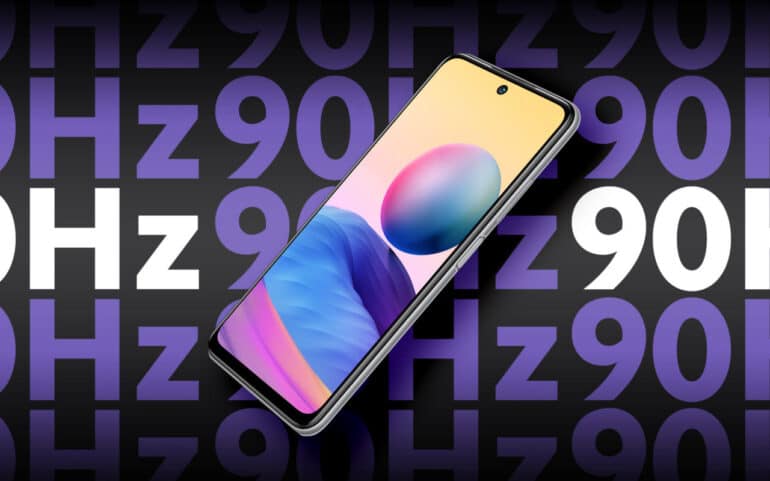 It’s strange to think that in the space of a few years, having screens larger than 6” has become the norm. This trend is even shared for mid-range smartphones. The Xiaomi Mi Redmi Note 10 features a 6.5” screen with an IPS LCD panel and 90Hz refresh rate.

The display has an FHD+ resolution at 1080x2400px. It also has a very decent 83.7% screen-to-body ratio and 405ppi pixel density. Other standard entries include the punch-hole camera, which has been centralised, along with an already applied screen protector.

I would’ve thought that having a 120Hz panel would be the baseline for mid-range phones in 2021. But that isn’t the case, with many still offering the default 60Hz, while others have improved slightly to 90Hz.

On the Redmi Note 10, while it offers 90Hz, the colours are a bit washed as a result. The display is already slightly pale in comparison to other units. It doesn’t help that the brightness drops from 500 to 400 nits when using the 90Hz option, compared to 60Hz. It’s strange, as IPS panels typically offer more vivid colours and contrast than it appears here.

Another of the disappointments on the screen is the auto-brightness feature. This is standard for the majority of smartphones today, but some brands attempt to offer a bit more in this department to add some extras for the end-user, or simply just a marketing gimmick. In this case, Xiaomi has opted for a 360° light sensor. This is meant to provide the most accurate lighting in any environment. However, I found that it tends to adjust far more than my liking, especially when it sets far too dim during use. I often have to readjust to turn up the brightness. It may be worth switching off this feature altogether. 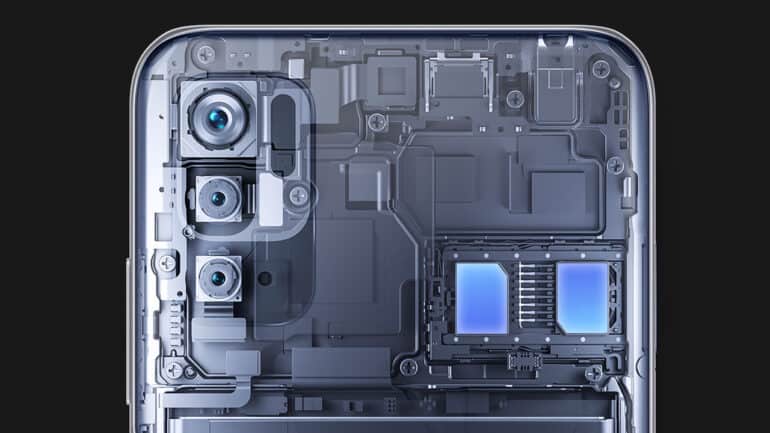 Another aspect throughout the mid-range sector is the various SoCs for each smartphone. Most modern flagship devices are fairly comfortable at performing all the tasks thrown at them. However, given the many options available in this category, and various degrees of cost-cutting, the performances will vary quite significantly.

The Xiaomi Mi Redmi Note 10 sports a MediaTek SOC. Specifically, it’s the MediaTek MT6833 Dimensity 700 5G. This is a 7nm chipset and, as per the name, it also features 5G support at a low cost, too.

Although it does feature 5G capabilities, it’s not the fastest processor around. Additionally, it also includes just 4GB RAM, which means that the device won’t be able to run very many OS tasks from flash memory. This also slows down the overall processing power.

In terms of the Geekbench 5 score, it achieves around 1,650. This falls short of the average 1,700 to 1,800 in this category. It’s not much overall. The unit is more than capable of completing those daily tasks, social media apps and more.

Where the CPU does take a bit of a hit is when you attempt to play some graphics-intensive games. For those, you’ll need to decrease the settings a notches lower to run smoothly.

As with all smartphones under the Xiaomi brand, it runs the MIUI firmware atop of Android OS. The Redmi Note 10 runs on Android 11 with MIUI 12.0.7. The firmware is swift and responsive, with great animations and more. Its lightweight nature makes it quite snappy, taking away some of the strain from a slower CPU. This is one area of the mid-range smartphone that can sometimes outperform that of the flagship units. Many mid-range units offer well above the 4,000mAh mark. The Xiaomi Mi Redmi Note 10 smartphone includes an impressive non-removable, Li-Po 5000mAh battery.

During the review, I operated the smartphone in both power user mode and just as a second device. The results were impressive on both ends. In all instances, I was able to power through an entire day, even as a power user. This included posting social media content, watching videos, making calls and more. In the less power-intensive use case, the battery life was able to last close to an entire week while being powered up in standby mode.

Unfortunately, I wasn’t able to test the device in 5G mode to really put the battery through its paces. 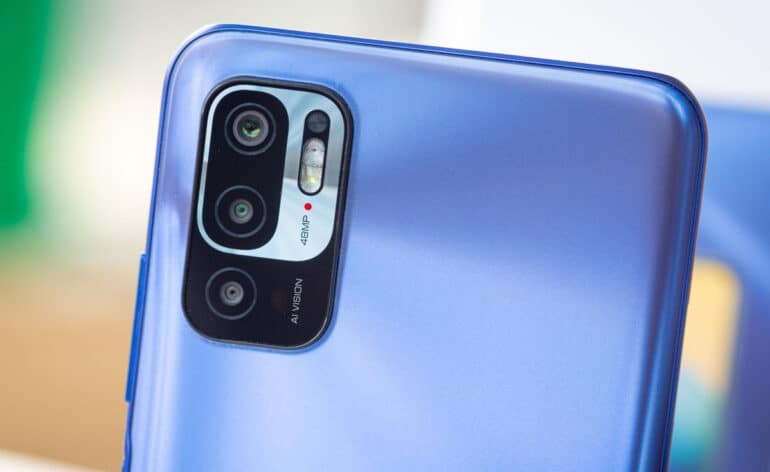 The smartphone has a triple-lens camera. This includes a 48MP main camera, as well as a 2MP macro sensor and a 2MP depth sensor. Given the setup, it means that there is no option for a telephoto or ultra-wide lens. If you’re looking to take a few snaps of the scenery and the likes, it may put you off right off the bat. It’s worth noting, however, that many mid-range units don’t offer a dedicated ultra-wide lens.

The main camera does a lot of the heavy lifting here. The 48MP camera is a Sony IMX 582 sensor, so you’re sure to get some level of quality from it given the optimum lighting conditions. Images were clear, colours were bright and the contrast is impressive. It also includes HDR support, for better lit imagery.

The Redmi Note 10 uses Xiaomi’s AI scene selector to make the best of the surrounding environments. This also changes depending on the object of the scene.

Where the smartphone’s camera does come under pressure is in variable light conditions. This includes both higher and lower-lit environments. In bright conditions, it washing out some of the images. And in dim environments, the clarity drops a bit. This means that it’s blurry and pixelated with quite a bit of noise. However, that’s to be expected given the budget category.

The macro lens doesn’t add much to the capabilities of the camera. Images aren’t of great quality and often ends up being quite blurry. There’s almost no use for this lens as the images themselves aren’t very useful. There’s a lot to enjoy about the Xiaomi Mi Redmi Note 10 5G smartphone. It offers quite a lot of value in terms of its looks, battery life and more. At a retail price of around R5,999, there is a lot of value from this mid-range smartphone. If you’re in the market for a new smartphone on a budget, then the unit is definitely worth it.

The Xiaomi Mi Redmi Note 10 5G is a mix of flagship and budget features and specifications. In some instances, it delivers surprisingly more than what you’d expect. However, in other areas, such as the camera and display, it falls just short of the mark. It’s a shoo-in for the top mid-range smartphone for 2021.