WWE #8 Review – It Cashes In But Comes Up Short Sadly WWE #8 doesn’t quite live up to the high expectations created by the last issue. While there are some great little moments in it – especially the hug-life hero Bayley making a wonderful, hilarious appearance – the main story itself breaks the suspension of disbelief quickly, and from that point onward it doesn’t quite work. Dean Ambrose, the Lunatic Fringe himself, is on the run with Sasha Banks in their makeshift monster truck. Behind them in this Mad Max-style chase is the Wyatt Family, who demand vengeance after Sasha Banks refused to join their cult. However, the mayhem takes an even wilder turn when Charlotte Flair and Dana Brooke join the chase. What will this mean for Dean, who has a Money In The Bank ladder match later that night? Meanwhile, in the backup feature, the legendary Undertaker focuses on preparing for his match with the Ugandan giant, Kamala. But could it Paul Bearer and his secrets which will bring about the Undertaker’s true downfall?

While WWE #7 did a great job in establishing a horror movie tale, this attempt at Mad Max comes across more like Wacky Racers. The laws of physics get tossed out the window, and there’s never a real feeling of urgency or danger.

The appearance of Charlotte comes out of nowhere and serves little purpose, while Dean’s confrontation with Brock Lesnar seems almost like a tacked-on couple of pages to drag the story out. Beyond the writing, even the art (usually so crisp and a joy to behold) drops in quality at times as it occasionally seems unfocused or rushed. It’s possible, and indeed likely, that trying to make a car chase in comic books work is always going to be a struggle for any artist because of the medium of stationary panels. Unfortunately, even considering that, this issue is a bit of a let-down. 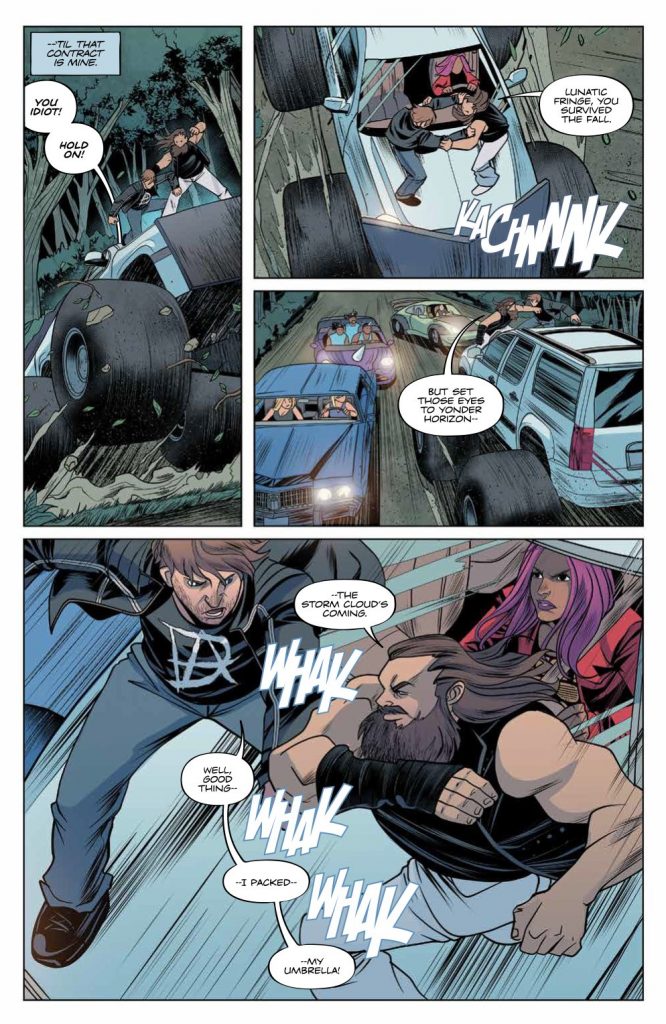 The backup feature with the Undertaker and Paul Bearer is short and to the point. Granted, unless you know your wrestling history, you just won’t get it. Still, for those who do it’s a bit of a rare treat as readers are given a glimpse in to the mindset of Bearer, and not his phenom.

This series has constantly proven to be a surprise, as it blurs the lines between wrestling storylines and reality in some incredibly creative ways. Unfortunately though, WWE #8 is a drop in quality. Like another recent Money In The Bank contract holder, it cashes in… but comes up short.