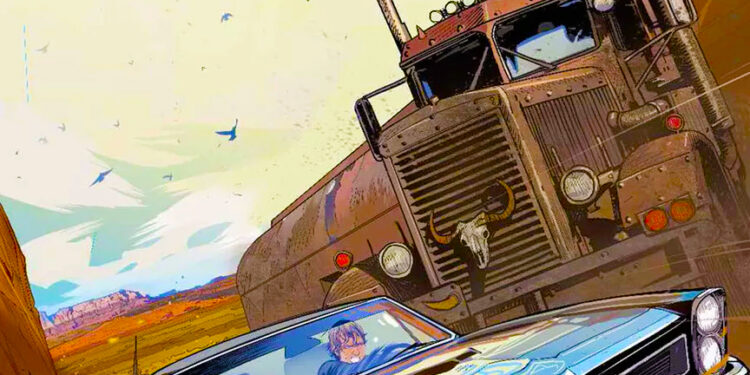 WWE #7 is another example of just how good a WWE comic book can be when it’s done right. The pairing of Dean Ambrose and Sasha Banks is automatically a good one, just because they’re chalk and cheese when it comes to their personalities.

Comic book Ambrose is every bit the loose cannon he is on television, deliberately wanting stale doughnuts and happy to make up his plans as he goes along. Likewise, Sasha Banks is no damsel in distress and more than holds her own. Harper and Rowan come across as being even more creepy than their television counterparts, and the introduction of Braun Strowman is intelligently handled. Yet it’s Bray Wyatt who arguably makes the most impact, being the charismatic, terrifying cult leader so often underused in WWE programming.

The lunatic fringe known as Dean Ambrose and the self-proclaimed boss Sasha Banks are on a road trip through parts unknown, USA. But a simple pit stop at a diner for coffee and day-old doughnuts turns out to be far more than either of them were counting on. Outside, Dean is attacked by Luke Harper and Erick Rowan, while inside Sasha must face a town full of Wyatt Family followers. Both are kidnapped, but while Ambrose plans his escape in his usual chaotic fashion, Sasha receives an intriguing proposition from Bray Wyatt over dinner.

Meanwhile in the backup feature, Jake “The Snake” Roberts wants to feed Damien, his python. The main course? Ricky “The Dragon” Steamboat…

The writing smartly blurs the lines as it should. The backwater setting is intentionally like something out of The Hills Have Eyes, something which is even referred to. It’s every creepy small town from every horror movie. It’s Wyatt Country, the way wrestling fans believe it is, and the whole story could be straight out of a wrestling promo or movie. Wyatt’s mention of the Flair legacy in wrestling and how it opens doors is both true and kayfabe. And for the more seasoned fans, the reference of Wyatt being a husky fellow is a neat callback to the days when he was known as Husky Harris.

With smart writing, a fun plot and wonderful artwork, it’s one of the best all-round comic book stories of the month.

Sadly, the same can’t be said for the backup feature with Jake “The Snake” and Damien. While the main story fills twenty pages and flies by entertainingly, these two pages limp along awkwardly. It’s possible that it’s just the style of artwork which lets it down, but there’s very little story to speak of too. But then, it is only two pages.

On the whole, if you’re a wrestling fan then WWE #7 is definitely worth your time and money. If anything, it may even be better than what’s on TV right now…