WWE #3 Review – The Tale Of Seth Rollins Continues To Impress 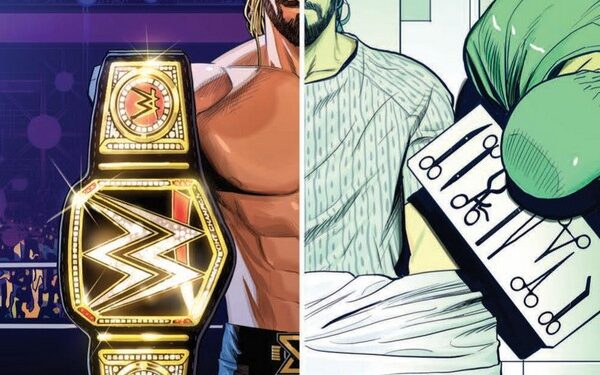 Times are bad for Seth Rollins. In the previous issue he learned what it took to be a true WWE champion, and discovered that with the title comes the responsibility of carrying the company. But his fight to remain the champ is one his body couldn’t cope with, and he now has to undergo surgery for a torn ACL. A broken man stripped of his title, he initially focuses on his recovery. Yet when he learns of Roman Reigns becoming the new champion, he slides into a deep depression and abandons any hope of a comeback. We review WWE #3. A visit from goofy tag team champs The New Day doesn’t help matters, but a reminder of the struggles of other former champions gives him a much-needed boost. Now, with a credo of Redesign, Rebuild, Reclaim, he begins the long road back to glory with a whole new attitude. But without medical clearance and Triple H’s blessing, what chance does he have? Meanwhile, in the backup feature, a young fighter named Finn must overcome the demon called Balor…

Whatever negative preconceptions you may have, WWE #3 is one of the best-written comic books on the shelves today. It probably helps if you’re a wrestling fan, but it isn’t essential. Likewise, Seth Rollins may not be your favourite wrestling superstar, but it doesn’t matter. Boiled down to its very essence, this is simply a tale of a man who sacrificed the things which really count to achieve success, lost it all, and is now on a quest to set things right. He’s selfish and arrogant at times, but he’s a sympathetic anti-hero. Since he spends most of WWE #3 confined to a wheelchair, you’d think that there would be little action – and you’d be right. Instead, this is drama at its purest, as you understand the overwhelming frustration of a gifted athlete being unable to compete in any way. That this is based in part on Rollins’ genuine injury troubles just increases the impact of it. In true wrestling style, this series acknowledges the kayfabe aspect of the business in blurring the lines between reality and story, to the point where this seems as accurate a representation of true events as any.

The bonus story in this issue is brief but adds a little depth to the mystery that is wrestler Finn Balor. The currently-injured superstar has one of the most fascinating routines in WWE history, with his dual personality of normal wrestler and demon, and it’s smart storytelling to highlight this. The style is reminiscent of DC’s Demon Etrigan stories, which isn’t a bad thing at all.

This is a series with a difference. WWE superstars are larger than life on television, and comic books take things one step further. The tale of Seth Rollins continues to impress and is a must-have for WWE fans and general readers alike.