I have been blessed to have played some of the very latest racing games to be released over the last two years or so and the games have gotten better and better. That said, it has become harder and harder to review them. There are only so many adjectives available. I may need to invent some new ones, like “t**”. Because who doesn’t think tits are great, right? Unless you are into boys. In which case, I guess it would be “balls”. And that’s what it is. WRC 7 is “the balls!” I’m writing this while sitting on my couch, with a strong cup of coffee, looking out over my garden. It’s early, the birds are singing, my 2 dogs are playing in the yard and I’m thinking, this old world is in a Biblical state of messed-up, everyone is killing everyone else, the last 100 years have been the bloodiest in human history, our Humanist leaders are convinced things have never been better and if it doesn’t rain A LOT soon, we will all be dead by Christmas. Donny, what are you going to do about it?

And as I contemplate these things, my mind slowly drifts to its new happy place, a place where the soundtrack is the crackle and pop of stainless steel free-flow exhaust pipes, the demonic whine of straight-cut gearboxes and the growl of a 2 litre, 4 cylinder engine that puts out 600+ horsepower… WRC 7 is “the balls”.

WRC 6 was good. I reviewed that and came away properly impressed. It was a huge improvement on WRC 5, and now 7 is the same leap forward on 6 and you have to respect Kylotonn Games for being gutsy enough to learn publicly.

But back to my dilemma. Racing games were either arcade in nature or simulators. Now we need to blur those lines to the point of “Gender Spectrum” ludicrousness. Is it an Arculator? Is it a Simulade? Should we allow it to be whatever it wants to be as the mood grabs it? So what is it? Is it F1 2017 with its twig and berries cut off, some hormone therapy and now its Trackmania Turbo? And I think that is the inherent problem the WRC franchise faces. You can change the appearance, but the DNA will always be the same. And change the appearance they have! The environmental work is fantastic.

I feel I need to segue here. I’m about to say something which may be controversial, and I hate doing that, but… Xbox One graphics are not as good as PS4 graphics. I know that is a generalisation, and I know I’m going to get some hate for that, but let’s be honest. GENERALLY, PS4 looks better than XB1.

In WRC 7, the graphics are amazing! There is so much detail in the landscapes. It’s photo-real and, clearly, the game was built with XB1X in mind, but even on my garden variety XB1, it looks really good. I should imagine in 4K HDR it’s going to be eye-wateringly beautiful. The cars are fantastically rendered as well. That drops off a little when it comes to the weather effects, like snow and rain. I reviewed Forza 7 recently and there the way the weather reacts to the cars barreling through it is incredible and I was hoping for the same here, but alas no. It gets even worse when you are inside the car, which would have been considered average 2 years ago. So, all the major stages are there and you go from the dusty Australian outback to the snowy pine tree covered Swedish countryside, turning the Christmas card beauty to a black, muddy slush. There are dirt tracks, tar tracks, snow and everything in-between and this is really where the game shines. Every track feels different. Even two dirt tracks in different countries feel different. I have been encountering this a lot lately, and I honestly don’t know how the wizards who code these games do it. I suspect blood sacrifice and the selling of souls. Whatever it is, it works. Really well!

There are various difficulty settings which are very effective. I tried the same track on both the easiest and hardest settings and a corner that saw me flying off track ass-over-elbow at full chatter, I could take with very little drama in the easiest setting.

All 3 of the major rally formulae are there, Junior WRC, WRC 2 and WRC, and you have to work your way up. The points system is new and I think it’ll have those who like it and those who hate it. Every time you have to redo a stage, you get fewer points, so the onus is to win in your first or second attempt. Also, you get bonus points for keeping your team happy, which means they tell you how they want you to race and you try your best to do that. Sometimes they want you to throw the cat at it, regardless of the cost and other times they want you to “Just bring it home safely”. It’s a stupid system and it really doesn’t work. This is a game best enjoyed playing with your mates online. I never thought I’d say that as I loathe multiplayer, but it is the best way to play. The Career mode is dull and uninspired. You start at the bottom and if you do well, you get the attention of a bigger team. They give you a chance to do a race for them and based on that, you may get promoted and so on. There is none of the Career Management you get in a game like F1 2017 where you need to schmooze new sponsors and so on. It just feels a little lifeless.

It’s possibly because I have been so spoilt of late, but WRC 7 is disappointing. It’s the prettiest tranny at the party currently, but just like taking a tranny home, you will be disappointed when it gets to game-time (unless you’re into that kind of thing, in which case, I think you’re going to be very happy). I would suggest maybe waiting till Christmas to buy it, it’ll be cheaper and it will make a great stocking filler. Nice try Kylotonn but, due to the excellent racing games out there, WRC 7 just falls a little short. WRC 7 is “the balls”, but it’s just not “t**”. 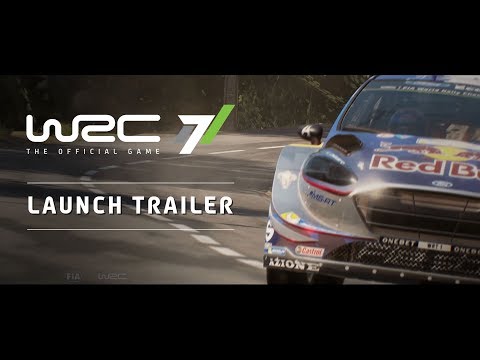