World of Warcraft: Ultimate Visual Guide – Updated and Expanded lives up to its title as the definite and official fantasy guide to the lore of Warcraft and the realm of Azeroth. Spanning 200 stunning pages of artwork which highlights timelines, events, locations, battles, and characters, this is the perfect companion to serious gaming fans and those who were intrigued by the latest blockbuster film. Created in close collaboration with Blizzard, World of Warcraft: Ultimate Visual Guide – Updated and Expanded is a worthy successor to the original Dorling Kindersley release about the most popular online role-playing game. Masterfully put together, both in design and content, this comprehensive monster-size coffee table book is another great from encyclopedia and visual dictionary kings Dorling Kindersley. No stone is left unturned in this amazing edition which is brought fully up-to-date with latest expansion sets and the older games (Warcraft II, Warcraft III, and World of Warcraft).

For those, like me who’ve played a few of the games, but don’t quite know or remember the deep story, this book is the perfect place to start. And with the film universe just setting off, there isn’t a better time to start. Furthermore, I’m yet to read a book from DK that was badly put together. Everything flows gracefully between the pages and there is just the right ratio between information and imagery.

After a foreword by Micky Neilson, the book begins with an introduction to Warcraft and then jumps straight into various chapters that deal with the lore; While there is a lot more fantasy artwork (in-game screenshots, comic book illustrations, concept art and paintings) than text, this guide covers a lot of ground. If you have an unquenchable love for Warcraft then this quintessential companion guide is a must-have – a beautiful tome to goggle. Everything is wonderfully captured with eye-catching panel arrangements and nothing is left out or forgotten. You’re guaranteed to be impressed with Blizzard for putting together a world so deep and so detailed that it spreads across such a large hardcover book. DK publishing have a long history in creating insightful fun, detailed guides for fans, and World of Warcraft: Ultimate Visual Guide – Updated and Expanded is among the best of them. 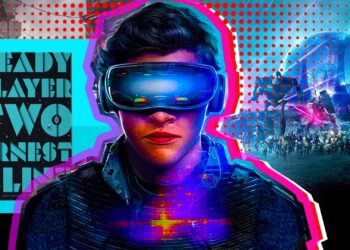