In short, Wonder Woman: The Official Movie Novelisation tells the story in an uninspired young adult fashion and nothing more. While that may be enough for some, it comes across more as a quick commercial tie-in rather than something truly memorable.

Novel adaptations of films are always tricky. Sometimes all the writers have to work with is the original script, which may have undergone significant changes before making it to the big screen, leading to discrepancies. Sometimes it’s hard to truly capture in words the amazing visuals of the movie, or the dramatic mood which in film is so effortlessly conveyed through snappy editing and a powerful musical score. Sometimes there’s a desire of the writer to expand on the story and characters in ways the screenwriters never intended, or by contrast to stick to the source material so closely that flaws which should have been explained simply aren’t.

Some adaptations work as an extension of the movie-going experience. George Gipe’s Back To The Future was one which took the source material, included some deleted moments and expanded others in an intelligent way. Craig Shaw Gardner’s Batman adaptation expanded on Tim Burton’s film too, including a scene where Batman rode a horse as he pursued the Joker across town, in a scene similar to one in Frank Miller’s Dark Knight.

Diana, princess of the Amazons on the isolated island paradise known as Themyscira, struggles from an early age to understand her destiny. Denied the opportunity to be a warrior by her mother, she rebels and learns to fight. Yet when Steve Trevor, an American spy in World War I, crashes his plane on Themyscira’s shores, she defiantly leaves the safety of the island and joins the fight against the forces of evil. Full of wonder and determination, she joins the fight on the front lines with Steve and his team of covert agents in the hope of stopping Ares, the god of war. But can she succeed in defeating him and bring peace to the world?

In this adaptation of Wonder Woman, the German battle cruiser off the coast of Theyscira hits a coral reef and sinks. In a strange way, it’s an odd metaphor for the book as a whole. After watching the film I’d been curious about how that German boat actually sank, because they never explained it. In this book they do. It takes all of one bland paragraph, and it’s sadly disappointing. I’d been hoping that some mythical beast had been summoned from the depths of the ocean by the Amazons as a defence system, and that I’d see that in an extended version of the film. Instead, the boat simply hits a coral reef and sinks, all its crew dying even though they had time to jump over the side and swim away. It’s a lazy, unimaginative way of solving the problem. 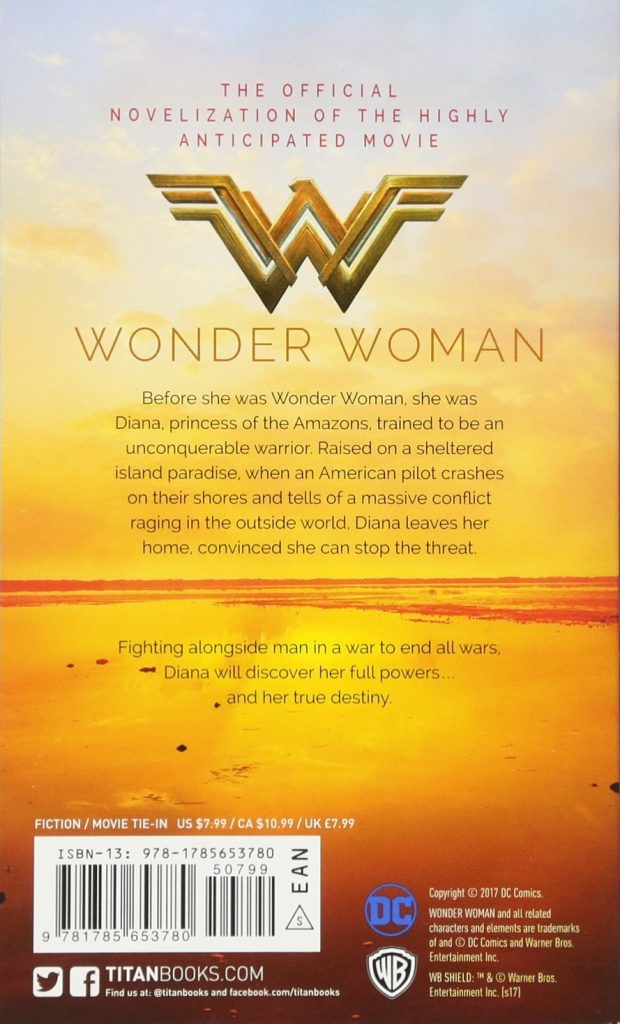 The entire book suffers from this throughout. By sticking too close to the source material, author Nancy Holder tells exactly the same story as the film and little else. While that’s exactly what it’s supposed to be, as a reader (and especially a Wonder Woman fan) you’ll hope for more. There’s no added depth to the characters, which only serves to make their dialogue even more hollow and reinforces them as one-dimensional, while action scenes stroll by at a matter-of-fact pace.

Instead of being an extension of the movie-going experience, Wonder Woman: The Official Movie Novelisation is the opposite. It’s so accurate to the film that it makes more sense to avoid it and just watch the movie again.