I’ve lived a life in plastic. She has turned an illustrious 75 years old and she doesn’t look a day over 25. She is an icon for the ages, a pure heroine who doesn’t flinch when it comes to her ingrained moral code. The daughter of a god, she is DC Comics’ female counterpoint to Superman. Clad in her Amazonian armour and armed with her golden lasso of truth, Wonder Woman is having quite the year. With the release of the long-awaited Wonder Woman film and her 75th birthday, I thought the perfect and most relevant life in plastic to tackle would be Diana Prince herself. 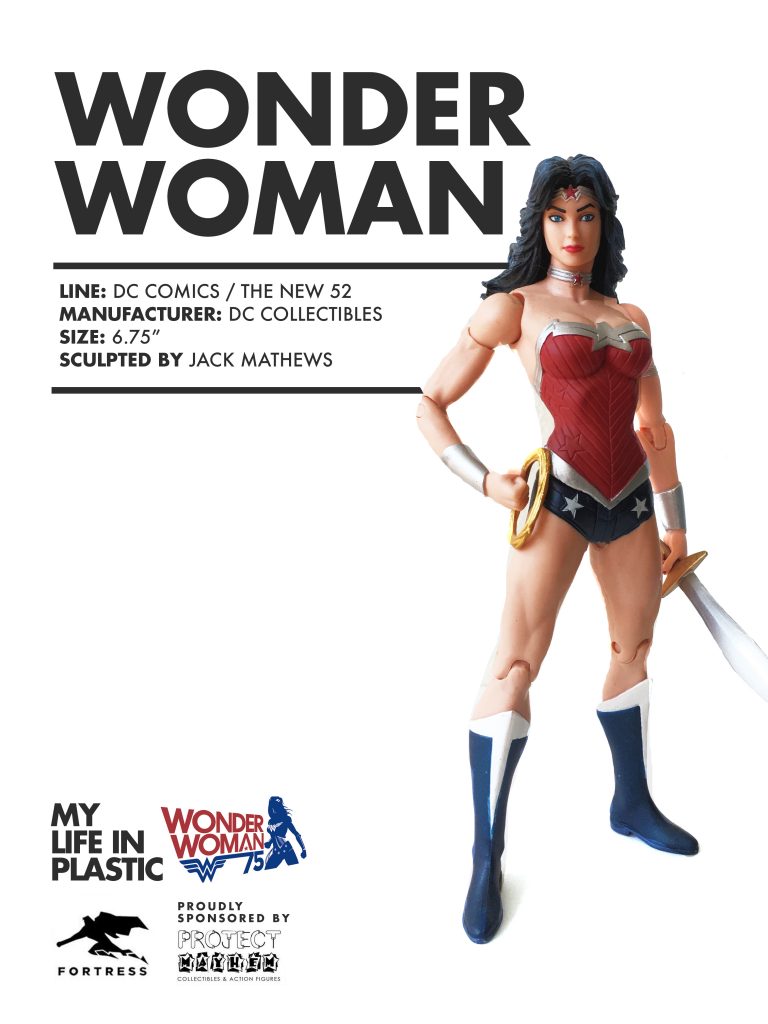 My first introduction to Wonder Woman was as a kid growing up in Westdene, Johannesburg, accompanying my dad to our local Portuguese-owned street corner café. There I would spend countless amounts of coins on arcade games like Cadillacs & Dinosaurs and Pac Man. Between the smell of fish and chips in saturated cooking oil, bread and milk and the occasional old toppie lighting a cigarette, I migrated from the video game section to the newspaper stand. At that age, the Gulf War and the end of Apartheid became secondary in my pursuit of fun. Enter a tattered, torn and all forlorn copy of Wonder Woman, with a cover illustrated by George Perez. Little did I know at that stage how that specific run would become one of the characters defining moments. Was it the long curly black hair with tints of blue? Was it the simple yet powerful imagery of a “girl superhero” wielding a sword and lasso? No. It was her boots. Those red boots with the signature white trim.

I always had something about superheroes and their boots. I would wear red and blue gum boots all the time, whether it rained or not. I always thought their powers emanated from the boots, not from capes or crowns or swords. The boots were the point of origin. Supes had red ones. Batman had blue ones. Flash had yellow ones. Green Lantern had green ones. So it made sense that the female version of Superman (whether it was Wonder Woman or Supergirl) would naturally follow suit and have the same colour of boots. Red meant power. Spider-Man and He-Man would also attest to the fact.

So to kick this piece off, this specific Wonder Woman, the Jim Lee-designed New 52 edition, does not have red boots. She has blue ones.

The rejigged outfit has changed all the conventional iconography relating to our beloved Amazon. Gone are the gold bracelets, tiara and W sign. Her red star on the tiara has also been replaced by a silver tiara in the shape of a W. The amount of stars on her pants have also been lessened. She has strict detailing in her bodice, much more in the line of a warrior as opposed to a swimsuit. And her boots. Are. Blue. 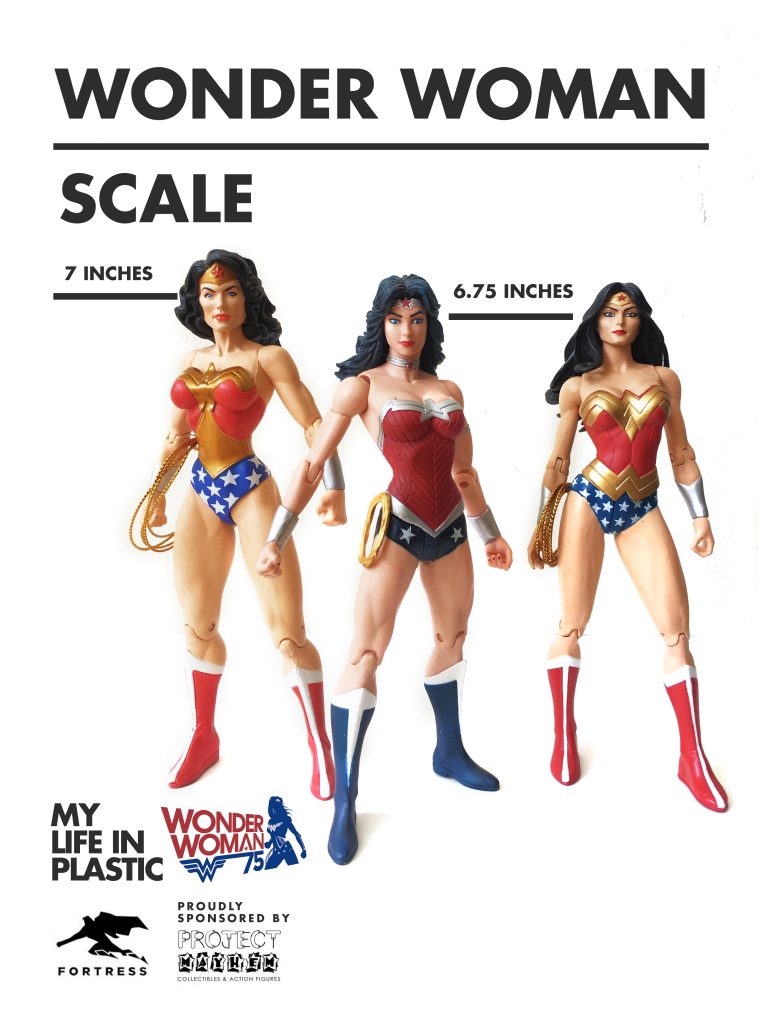 I made peace with this a long time ago. This figure isn’t new at all. She came out in 2012, the year I started collecting figures again. I decided that the New 52 collection would be it. I still love these figures, because I simply love Jim Lee’s art. His keen eye and super detailed superhero anatomies feel like the more comic-friendly version of Alex Ross’ hyper-realistic style and I have always gravitated towards heroes who seem more believable. After the release of Batman, Green Lantern and Aquaman, Wonder Woman would be the fourth figure in the ongoing series to be released. I had to have her.

Now let’s backtrack slightly. The reason, and burning desire, I had to get this Wonder Woman figure was purely because I had up until that stage never owned a Wonder Woman figure. Gasp. The champion of the red booted heroine had never owned a Wonder Woman figure? No. They were pretty much impossible to find in South Africa. After waves and waves of Batman and Superman figures made by Kenner in the 90’s, I spent hours looking at the back of old comics advertising the Super Powers series made by the same company during the 80’s. I waited and waited, and she never came.

I walked into Reader’s Den in Cape Town on a rainy Saturday morning, parted with what seemed like a chunk of my paltry salary at that stage and all wrongs were righted.

I spent the following months looking at figures in boxes. The New 52 heroes wouldn’t feel air on their capes. They would remain stoic and caged, to be gazed upon behind their plastic confines. I never imagined myself to be that guy. I made prisoners of them – I became their Lex or Joker. I kept looking at Wonder Woman. How could I wait this long for something and not enjoy it? Two years passed and their meticulously manufactured moulds would hold them still. It was a Saturday morning and I saw a few panels from Tony Aikins and Cliff Changs’ run on Wonder Woman: Blood. I thought back to the days when I would read a comic, see a movie or television series and I would run to my parents to go get that specific character for me because I had to create more adventures for them. My mind raced back to the café in Westdene. I was 6 again. I saw Wonder Woman and I had to create a new universe for her.

Earlier that year I read a haunting quote from a collector. Someone had asked him whether figures should stay in the box or be taken out. His response: “Imagine a book, sitting on the shelf, never being read. It looks beautiful, but you’ll never know the story.” I went down to the kitchen, got a pair of scissors and the rest is history.

The New 52 Wonder Woman is gorgeous. She comes across as strong and powerful, yet has an innate femininity which is undeniable. When I go to my figure shelf I always go back to her and the rest of the Trinity and they beautifully represent where I have come from.

I have fervently, in the past few years, started to chase down figures of her. Some have come from Italy, others from Edenvale. But Wonder Woman, with her boots in red or blue, would always enchant a boy from Westdene on a newspaper stand. To stand a chance to win this New 52 Wonder Woman figure, courtesy of Project Mayhem Collectibles & Action Figures, all you need to do is tell us who your favourite DC Comics hero is and why – in the comments section below.