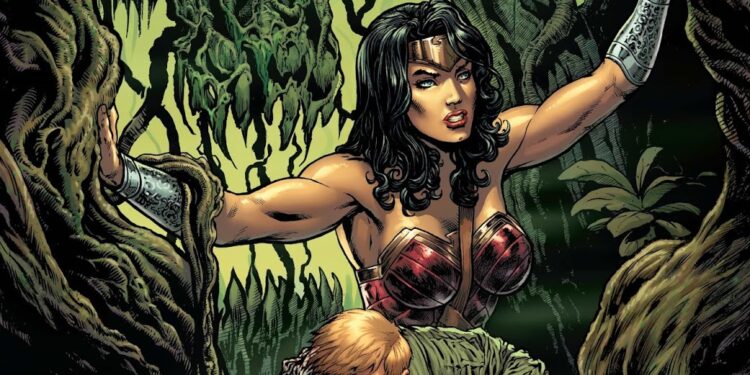 This is ridiculous. Wonder Woman is consistently good, and after heaping much-deserved praise on it before it’s hard to know what else to say other than: read it. Still, Wonder Woman #5 deserves a proper review anyway so here goes. [dropcap]T[/dropcap]hings are drawing to a head as the paths of Wonder Woman and Steve Trevor continue to draw closer together. As Etta Candy relays information about the mission Steve Trevor and his platoon are on in Bwunda, where they hope to stop the evil warlord Cadulo, she hopes that destiny will play a hand. Trevor and his men have been captured and Trevor himself is beaten in a bid to learn information about Wonder Woman. Meanwhile, Wonder Woman continues her quest with Cheetah in a bid to uncover the truth about her own conflicting histories.

However, as Etta Candy knows, there’s something about Wonder Woman and Steve Trevor which keeps drawing the two together. Cadulo informs Trevor of the nature of his monstrous lord Urzkartaga and prepares the soldier for a strange ritual, while Wonder Woman finally reaches his men. But is she too late, and can Cheetah truly be trusted? One of the things which this series has demonstrated so far is how measured it is. While the pace of the story may move a little slowly for some, it’s more a matter of taking its time to set a tone and making every little moment count. From the depth of the characters to the dialogue they convey, it works. While this issue may not have the frenzied action sequences which The Lies part 2 had, both the art and writing are as solid as usual.

So far we’ve seen Wonder Woman at her best as both warrior and diplomat, and Steve Trevor has proven himself to be more than capable. Yet here we see a little more of Etta Candy, a character who has often been overlooked, and the inclusion of Cheetah in this storyline continues to be one of this title’s more interesting aspects. Barbara Ann Minerva, better known as Cheetah, may be generally known as Wonder Woman’s long-time foe. Yet with every issue she’s presented as a sympathetic character more than ever before.

Yes, Wonder Woman #5 is another great issue and deserves praise. By this stage that may sound hollow, but it isn’t. While it’s a little dull to keep writing about how good this series is, the comic book itself isn’t dull in any way. I wouldn’t have it any other way and I’d hate to see this level of quality drop, just to give this hack reviewer something else to write about.