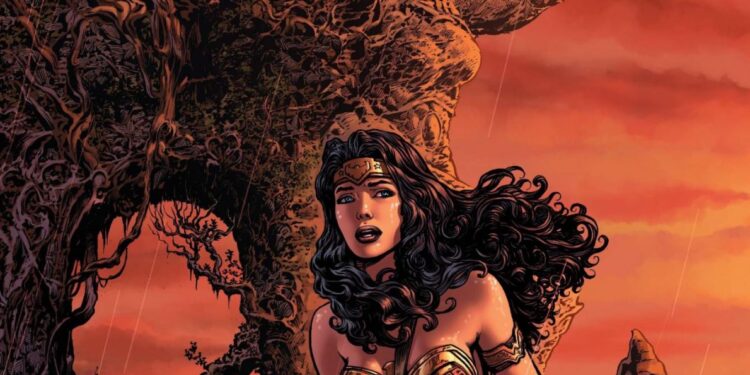 Wonder Woman and Steve Trevor have finally made their way to Themyscira in Wonder Woman #11, so why does everything seem so wrong? Steve Trevor can’t find the priestess who tended to him the last time he was there, and for that matter nobody has even heard of her. Hippolyta is different too. As are the buildings, and the entire landscape. But could this be because Themyscira isn’t a physically constant place? If so, then why hasn’t Wonder Woman noticed all of the changes until the touches her lariat of truth, and why has an old puncture wound opened up on her wrist? Meanwhile, back in America, Etta Candy squares off against Veronica Cale…

For what seems to be the conclusion of The Lies storyline, this sure has the feel of asking more questions than it’s resolving. Which is for the best, because it’s so damn good that you don’t want this issue to end. It’s hard to know what’s coming next, but there are some huge moments in this which are just what readers have been waiting for. Etta Candy looks set to be elevated to the level of Amanda Waller, which works superbly and is part of one of the creepiest moments ever in any Wonder Woman comic book. Wonder Woman herself is still struggling to learn the truth of who she is and why her histories seem to be so contradictory, but it’s Steve Trevor who makes the breakthrough here and with good reason. The fact that he’s also aware of these differences is so significant that for readers it’s like a bomb hitting, and Greg Rucka’s ability to constantly stay several steps ahead of his audience is once again on display.

And now, once again at the risk of sounding ridiculous, it’s time to praise artist Liam Sharp for making this look so stunning. Except you’ve heard all of this before and know the routine, so instead let’s just say that he’s still doing a fantastic job and… blah-blah gorgeous lines blah-blah understanding panel layouts blah-blah beautiful work blah-blah. You know what I mean. But he really does deserve a raise if he hasn’t already received one.

Wonder Woman #11 continues to impress, and with the plot constantly unfolding in new, creative ways it deserves all the attention and praise it gets. And so do those working on it.