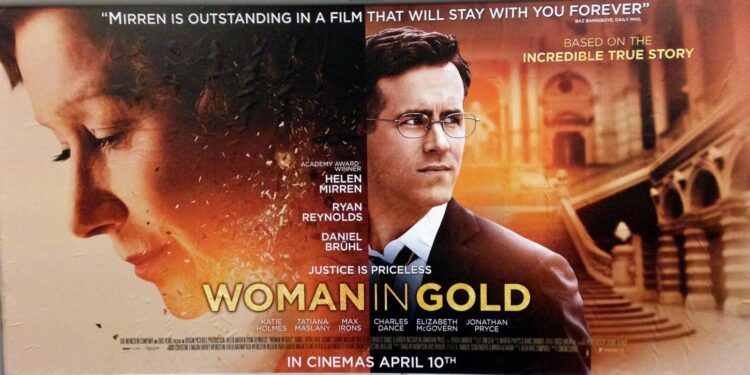 Part historical thriller, part odd-couple comedy, lurid and sentimental docudrama Woman in Gold, despite its fascinating premise, sadly falls short of reaching its full potential on screen due to a paint-by-numbers script. Based on a true story, Woman in Gold tells the story of an emphatic elderly woman’s quest to retrieve artifacts and artworks stolen from her family by Nazis when they seized control of Austria during World War II. Among the stolen loot was an incredibly valuable painting of Maria’s aunt by Gustav Klimt (widely considered to be one of his greatest works), which has gained popularity as “Austria’s Mona Lisa”. With the help of a small-time lawyer Randol Schoenberg (Ryan Reynolds), she takes on the Austrian government to rightfully claim back what’s hers. Although there aren’t too many surprises, the road ahead isn’t so simple.

The story is told in a relaxed (often light and funny) way, without causing the audience to feel anything deep or emotional. Yes, we want to see Maria Altmann (Helen Mirren) succeed but the lack of tension in her journey is sincerely underwhelming. It’s only during the film’s flashbacks to a younger Maria and her family dealing with the brooding war that the film really comes alive. The strong performances are ultimately not enough to compensate for the narrative’s failure to make us sit up and pay attention — especially during the long drawn out courtroom scenes.

That being said, Woman in Gold should find an audience. It’s a well-intentioned, although old-fashioned, imperfect telling of a golden story. It’s okay.