Why Scrat Is Missing From The New Ice Age Movie 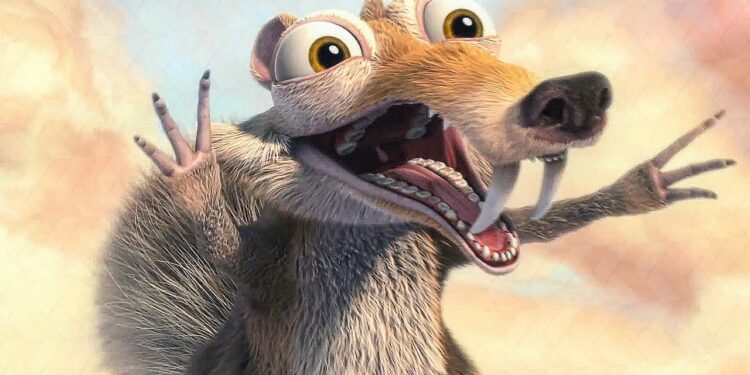 Fans would have noticed that everyone’s favourite acorn-obsessed sabre-toothed squirrel was missing in the new film. So where is Scrat in the new Ice Age movie?

The story of Disney’s acquisition of the Ice Age franchise is filled to the brim with drama, dissolved studios, and copyright issues. Just recently, The Ice Age Adventures of Buck Wild was released in Disney+ to disappointing reviews from both critics and fans. The movie is also notorious for being the first film in the franchise produced without the involvement of the now-defunct Blue Sky Studios.

Though many would say that the cultural impact of the Ice Age movies is nowhere near as significant as it was twenty years ago, there’s no denying that there are still fans of the franchise’s charming characters. Of course, we can’t talk about Ice Age without mentioning the goofy squirrel, Scrat: the character was seen as the franchise’s mascot, and it even became more popular than the movies themselves.

Considering how beloved Scrat was, his absence in the latest Ice Age film stuck out like a sore thumb. Why would the most recognizable character in the entire franchise not make a comeback, especially now that Disney must be looking to rekindle the love for the animated franchise? The reason, as is usually the case, has to do with copyright laws.

Nearly twenty years ago, in March of 2002, the first Ice Age movie captivated audiences with its surprisingly mature plot and genuinely funny moments. However, none of the Ice Age characters were as funny as Scrat: the rabid squirrel-looking thing that was always chasing his beloved acorn.

The newest Disney+ film stars Simon Pegg as Buckminster, who tries to defend the Lost World against it being overtaken by the dinosaurs. It’s a wild departure from the usual stories we’re used to seeing on Ice Age movies, but in a franchise that has already gone to space and featured ice age pirates, nothing can surprise us anymore.

The dispute for Scrat’s copyrights began all the way back in 2002 when New York-based artist Ivy Silberstein claimed to have created the character she called “Sqrat” in 1999. Her litigation with Blue Sky and Twentieth Century Fox lasted for the better part of two decades, culminating in 2022, when it was announced that, yes, Silberstein was effectively the co-owner of the Scrat copyright.

As co-owner, Disney would have to ask for her permission to add Scrat to any future Ice Age film, beginning with Adventures of Buck Wild. Fans speculated that the artist was probably going to lend the rights to Disney one way or another, but, to everyone’s surprise, Silberstein declined.

“No Scrat in Ice Age 6,” Silberstein confirmed in January of this year via Twitter. It soon became clear that, if a new Ice Age was to be made, it would have to be missing the franchise’s most iconic character, and fans were quick to react to the news.

While some saw the news as proof that there was still a chance for artists to challenge the copyright laws of giant companies like Disney and Twentieth Century Fox, some others saw the events as a petty feud by Silberstein.

Whatever’s the case, the chances of seeing any movie or animated project featuring Scrat in the future seem grim. Considering how terribly Disney handled the entire Blue Sky situation, is no surprise to see the entire Ice Age franchise imploding, especially now that the reviews for Adventures of Buck Wild have been as terrible as they are.

Scrat had a good run, but at least now that it’s over, we can look back and see how this tiny comic relief managed to become even more culturally significant than the franchise from where it came.

Would you like to see Scrat return to the Ice Age franchise?