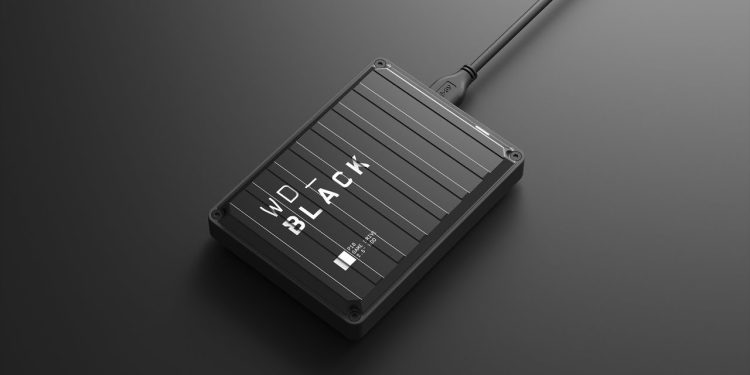 In 2020, Western Digital announced its new, high-performance gaming drives, the WD_Black range. While we were still at the height of the pandemic, the increase in gaming and strong performance of the performance drives lead to good sales of the new range. I reviewed the impressive P50 2TB and D10 Game Drive 12TB drives. This time around, I have the WD_Black P10 5TB for review.

At the launch of the WD_Black range, the P10 was only available to a maximum capacity of 3TB with only the Xbox variant available in the 5TB option. After the success in sales, WD expanded upon its offering across the range, increasing the capacities for some of its units.

It’s the bane of any gamer when running low on storage capacity for new games to be installed on their console or PC. Even worse having/wanting to re-download games you previously deleted, all because of insufficient storage options. This is where the P10 fits in.

On paper, then, the WD_Black P10 is the lower-tiered drive from the P range while offering more in the way of capacity. So, how does it perform in the real world?

The WD_Black P10 5TB follows the same design ethos as the rest of the range. I’ve been a fan of the design principle for range since it was first announced in 2020 and those designs continue into 2022. Why change a good thing, as WD nailed the design pretty much with it on launch.

As you’ve already seen over the years in my reviews, I enjoy more minimalist designs. And that rings true across almost every piece of hardware or tech out there. The WD_Black drives each have a premium look about them. Despite its plastic finish, it’s matte black finish and its ‘shipping container’ aesthetic is easily one of the best-looking drives on the market.

The ribbed style is featured both on the top and bottom of the casing, with the sides left smooth all around. The top also features four hexagonal screws on the corners with a font that looks like something seen in a science lab. There is also an LED indicator light, which flashes white when in use, unlike the often-seen red and blue lighting. This ties in with its monochromatic, black and white colour theme.

Lastly, there’s a Micro-B port, which supports USB 3.2 Gen 1. Unfortunately, it doesn’t feature the more modern Type-C cable as we see on the P50 unit. It would have been a welcome addition if it had, irrespective of the type of transfer rates the drive is capable of.

Its size lies closer to the P50 than the D10 units. It measures 118x88x21mm, which is almost double the thickness of the P50, 30% wider but having the same length. It’s also reasonably light, weighing just 226g. That’s only about 30g heavier than the Samsung Galaxy S22 Plus, which can easily be carried around in my pocket all day long. The 2TB variant is about half the weight with the same packaging, making it even more portable.

Even if you’re just looking for a portable external drive without too much concern for overall performance, the WD_Black P10 will definitely tick all the right boxes.

Speaking about boxes, there’s very little in the way of contents for the unit. All you’re getting is the WD_Black P10 unit, a USB cable and some standard documents. However, that’s all you really need.

Given its lightweight and relatively compact design, it’s a very portable unit. And, more often than not, you’re going to use it that way. This means that you wouldn’t need the stand or dock for the drive, as it can lie flat on any surface, and then fit right back into your pocket once you’re done.

When it comes to performances, the WD_Black P10 5TB doesn’t quite match that of the P50. However, that isn’t the aim here. The P50 sports an NVMe internal drive, which requires specific PC hardware to reach optimum speeds, whereas the P10 has a more conventional 2.5” HDD under the casing.

As a result of opting for the 2.5” HDD – with 5,400rpm, its transfer rates are significantly down on that of the P50. Some 15x when benchmarks are compared. But the P10 was designed to offer value in terms of gaming storage. This means that when you’re downloading new games and require additional storage, the P10 would come in handy. Once you’ve completed any game, you can transfer to the drive and copy any files of other games you then want to play back to your console or PC’s internal storage.

The P10 has a listed 140MBps read and write speeds. When conducting several benchmark tests on the likes of Crystal DiskMark 6.0, BlackMagic Disk or ATTO Disk tools, the results average between 130 and 140MBps. So, as far as advertised transfer rates are concerned, it hits the money. When compared to other 2.5” HDDs with 5,400rpm, the P10 is up there in the top 10% of units, with some of the highest scores for reading speeds.

With 5TB of capacity to utilise, I partitioned the drive into two equal capacities for additional testing. The first partition would be for the storage of games for the Xbox and the other for PC, as well as additional files to be backed up. Again, similar transfer rates were observed on benchmark tests, as well as actual copying to the drive from my PC directly. Copying larger files had a much higher transfer rate than multiple, sequential copies of smaller files.

When under load, there is no difference in noise levels produced as when idle. There is a slight hum once plugged in, which is only really audible when it’s right next to you, as when using your laptop but not so much when it’s about 50cm away atop your PC. It also doesn’t get hot at all during long copying sessions.

A few years ago, I operated my, then, PC using conventional HDDs to get the job done. Although my storage capacity requirements were always on the rise, I had opted for capacity over performance. After receiving my first WD_Black drive, this all changed. Performance is the main factor when it comes to how I utilise the drives. Now, with the P10, you get the best of both worlds – decent read/write speeds (even for an HDD unit) with sufficient capacity for all your games or other files.

With a well-balanced option on both performance and capacity, the WD_Black P10 5TB delivers great performances. It also carries a really good retail price, making it an extremely good buy for prospective buyers looking for additional storage capacity for their games.