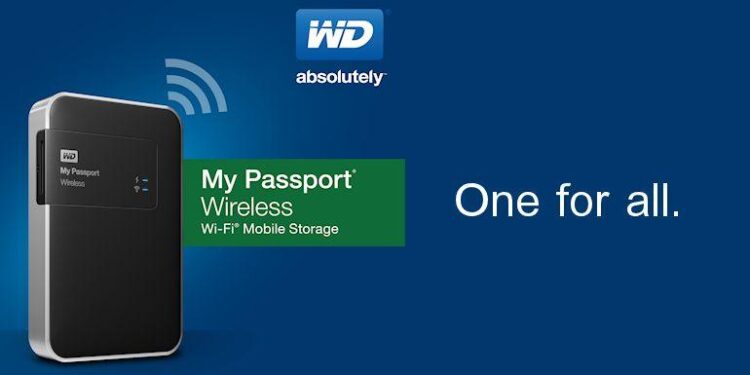 A short while ago, FoS reviewed the WD My Passport Ultra Metal Edition. This time around, we review Western Digital’s take at a portable, wireless HDD, the My Passport Wireless. While many companies in this market offer their own version of a wireless HDD, it is essential to find a good medium between battery life and performance, with a few features and accessibility options thrown in for good measure. Does the My Passport Wireless achieve this middle ground? The My Passport Wireless is an oddly shaped portable HDD. Unlike the standard portable HDD, the unit is about twice as thick, and weighs 350g, more than 100g heavier than the WD My Passport Ultra Metal Edition, which, itself, was a tad heavy already. The exact dimensions of the 2TB version we received is 127x86x29.8mm (LxWxH). The 500GB and 1TB version both weigh less than 300g, the 2TB quite significantly heavier then. The top of the unit’s enclosure is covered in matte black, plastic, with the branding and LEDs near the top end. The two LEDs indicate the status of both the battery and power, as well as the Wi-Fi connection status. A flashing power LED indicates the unit is preparing itself for use, while a solid light indicates it is ready to be used. This LED will also flash white, blue, orange and red, depending on USB connectivity and battery status. The Wi-Fi LED indicates preparation (when flashing), and ready to connect (when solid blue). The rest of the enclosure is covered in a matte grey plastic. The rear of the device indicates the branding and licencing information, whereas the sides include a power button, USB port, and Wi-Fi (WDS) button, all on the top side, and an SD card slot on the left side.

The unit is powered by a USB input, which has USB 3.0 support. The USB cable included can be connected directly to the PC, which, then, acts as your standard HDD, as well as to the external power adapter, for which you’d then need to connect to via Wi-Fi to access. The unit is also able to run off its own battery, which charges automatically when connected via USB. The My Passport Wireless includes a number of connectivity options, as well as software available to access content via these different options. The unit has quite a number of features included, despite its rather lowly design. We start off with the standard connectivity option, by means of a simple USB connection to your PC. Using a USB 3.0 port will allow users to achieve read and write speeds of around 110MBps, quite impressive by any means. Switching to USB 2.0 reduces the speeds down to roughly 30MBps, a significant decrease.

Disconnecting the drive from the USB port automatically switches it to Wi-Fi mode, that being if you’ve previously gone through the quite setup. Once the Wi-Fi LED indicates its availability, users can connect to the HDD by means of Wi-Fi on any of their devices, PC, smartphone or tablet. When connected via Wi-Fi, users will require the use of WD’s software to remotely access the drive. On PC, simply connect to the “MyPassport” AP (default SSID) and then, in your browser, use the URL, http://mypassport, to access the content and settings for the device. On your smartphone or tablet, you can follow the same process to connect, but then you will need the WD My Cloud app installed prior to accessing the drive. It may seem annoying that users will have to use their Wi-Fi to connect to the device and lose their internet connectivity, but WD has a solution for this. Via the browser or app, users can add a Wi-Fi network to the device itself, which then allows you to continue you to regain internet connectivity through the My Passport Wireless. Unfortunately, this process isn’t as easy on the mobile app, as it is riddled with bugs. Thankfully, if you setup Wi-Fi on the browser prior to using the app, the settings will be saved and available for use on the smartphone as well.

Other features on the device include automatic backup of files on the SD card, as well as backup of devices connected from. In addition, when using the app on your mobile, users can access the camera from the app in order to save photos directly to the drive when snapped.

In terms of battery performance, the unit has an expected battery life of around 20 hours. Unfortunately, mainly due to the fact that this is a review unit, I was unable to get anywhere close to this time, achieving more along the lines of an hour or, at best, two. The battery support allows for usage between charges, great for those on the go, especially when listening to music of watching a movie. That being said, the media support is quite limited on the device, only allowing a few standards such as .mp3, .mp4, .avi, etc. With the increasing number of Matroska (.mkv) video content, media playback is a bit of an issue in some extent. In addition to this lack of media support, playback also poses some issues, as there is no continuous playback. This means that users will have to select each file they wish to play, and each time they leave and re-enter the app, the media does not continue where the user left off. Another strange occurrence in portability is the gyroscope effect when the device is moved from a stationery position. While this is standard for stabilisation of the parts within the unit, it does raise questions about actual portability, using the device while on the go.

The WD My Passport Wireless is a device with great potential, with different connectivity options for convenience. The device isn’t bad by any means, but at the same time isn’t as good as it could, or rather should, be. The issue lies mainly in part of poor firmware, as well as PC and mobile software. It may be short sighted to conclude that all the failures of the device is directly related to software and the development thereof, but you can’t help but feel that if the software were up to scratch, this review would have a completely different feel to it. On the positive side, because it is mostly software related, it can be updated and fixed over time to provide the best solution.

At a cost of over R3,000 per unit, it would be very frustrating for any user to have to experience any of the above issues and concerns. With that said, in its current state, the device isn’t recommended for those in need of a wireless solution. If you’re looking for a more standard portable, the My Passport Ultra Metal Edition is a much better buy.