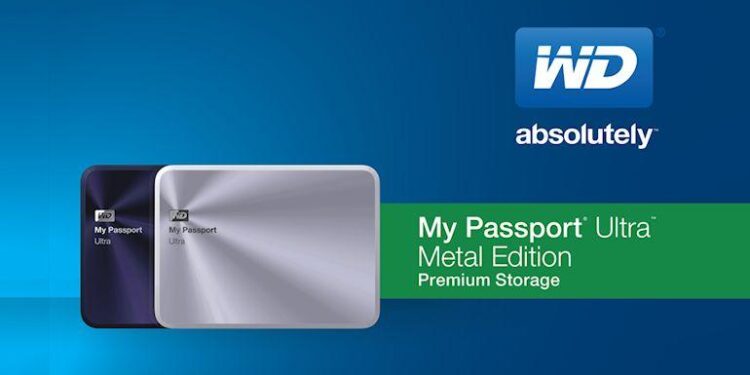 Western Digital recently celebrated the 10th anniversary of their My Passport range of portable hard drives. To commemorate the success over the decade, WD introduced two new additions to the range, the My Passport Ultra Metal Edition, as well as the My Passport Ultra Anniversary Edition. WD has provided us with the former, the Metal Edition (2TB), for review. In recent years, with the increased storage space provided on portables, some of the emphasis has been moved from pure performance to looks as well. Apart from just its read and write speeds, the Metal Edition also has a lot to offer in terms of its design and build. Without actually looking at the unit itself, its name gives a lot away in terms of the overall design and build. The Metal Edition has the same form factor as its predecessor, the My Passport Ultra, with dimensions differing only slightly. The Metal Edition measures 80x110x18.8mm, while the (same storage) Ultra version measures 81.6x110x15.4mm. The biggest difference, however, lies in its metal finishing; a brushed aluminium with a “radial-spin-design”, which gives it an effect reminiscent of the sun’s rays when light is shone upon it. The most common variant of the unit is the navy blue we were provided, although you can also pick up the gold or silver variants. The minimalistic design is only broken by the logo and branding on the top, and the USB 3.0 port and maintenance slot (in the form of a pin-sized hole) on the side.

The metal finish does have a slight drawback, in that it is faintly heavier. Whereas the equivalent, 2TB, standard edition weighs 230g, the Metal Edition weighs 240g. To put this into some sort of perspective, the average 5” smartphone weighs roughly 150g (the Galaxy Note 4 at 176g). The added weight over your smartphone isn’t all that great in the end, the 10g difference for the added metal even less so. The additional weight, then, is easily ignored, as it provides a shiny finish most wouldn’t complain about. Let’s be honest, shiny gadgets are always better looking.

Unlike many of the typical external storage devices formatted in either FAT32 or exFAT partitions, the My Passport Metal Edition comes pre-configured in NTFS formatting. This saves me the time of having to remove all the included software, re-formatting, and adding the software once again. [While there are purpose-built applications converting NTFS to FAT32 and vice-versa, they’re not always guaranteed to work 100%.] When using the unit for the first time, users simply need to unbox, connect to any device and start copying. There is no further setup required.

If you’re not one to fuss over the included software on a new hard drive, then this next paragraph wouldn’t be of much interest. In any case, WD has included three applications with the unit, that being the WD Drive Utilities, WD Security, and WD SmartWare. WD Security is pretty self-explanatory; it allows users to setup password protected copying and viewing. When the device is plugged in, you will be prompted for the password. Failing to enter the correct password means that the drive will not be accessible (or even visible) on your desktop, or TV, etc. WD Drive Utilities, on the other hand, provides more complex tools, allowing users to perform diagnostics, set sleep delays, erasing and cleaning operations, temperature and storage capacity reports, and quite a few other tasks. The WD SmartWare software provides professional backup facilities for users. Users can set automatic backups, specific folder backups, and how often backups should run. Upgrading to the Pro version allows users to save backups to the cloud as well.

In terms of the overall performance of the unit’s read and write speeds, the My Passport Ultra Metal Edition performed quite well. Switching between USB 3.0 and USB 2.0 makes quite a big difference, the former reaching read and write speeds of between 110 and 120MBps, whereas the latter between 30 and 40MBps. Although the USB 3.0 performance is three times faster than that of USB 2.0, the latter speeds aren’t as slow when measured against standard read/write speeds of other USB 2.0-only devices. The Western Digital My Passport Ultra Metal Edition is available in two storage capacities, a 1TB version for R1 299.00, and a 2TB version for R1 999.00. Considering that the Metal Edition has a premium of an additional R200, you have to ask whether the metal finish is worth the added cost. In short, I’d have to say yes. The metal build will provide ruggedness for those prone to drops, even if it didn’t, the premium look and feel is more than worth it. The unit isn’t the lightest or fastest around, but the 10-year anniversary of the My Passport range couldn’t have asked for a more worthy flagship. It makes the entire range look a lot more stylish.