Disney has released the first trailer for their new series of animated shorts, Star Wars Galaxy of Adventures, which will debut November 30th on the Star Wars Kids YouTube channel. The new series is definitely aimed at the youngest potential Star Wars fans. “Over the years, I’ve had so many of my friends who are parents tell me how much they wanted to introduce their kids to Star Wars but didn’t feel that their kids were quite ready for the movies yet,” tells Lucasfilm’s vice president for franchise content and strategy, James Waugh. These shorts “will introduce the classic themes, pivotal moments, and iconic characters from the Star Wars saga to the next generation.”

Sure, Star Wars Galaxy of Adventures is just another way for Disney to indoctrinate audiences, and to ensure that everyone knows who Darth Vader, Princess Leia, Han Solo, and Luke Skywalker are. I mean they need a future market for their upcoming movies, shows, theme parks, and merchandising. Still, it looks like tremendous fun for fans, young and old. Plus, the animation style looks really good.

“Creating content that is unabashedly for kids in this bite-sized, unique animated form, allowed new moments to evolve out of the old, new ways to look at the content, and ultimately expanded the potential of how Star Wars should look and feel,” says Waugh.

Adventure awaits you and the younglings in your life in Star Wars Galaxy of Adventures, a new series of animated shorts that will introduce the classic themes, pivotal moments and iconic characters from the Star Wars saga to the next generation. 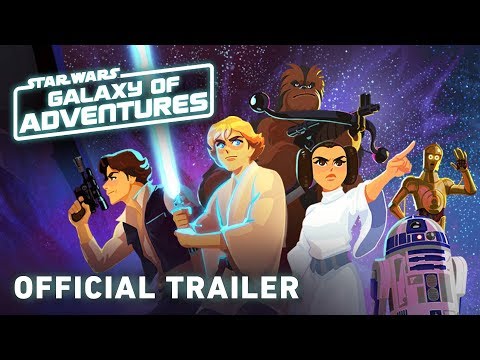