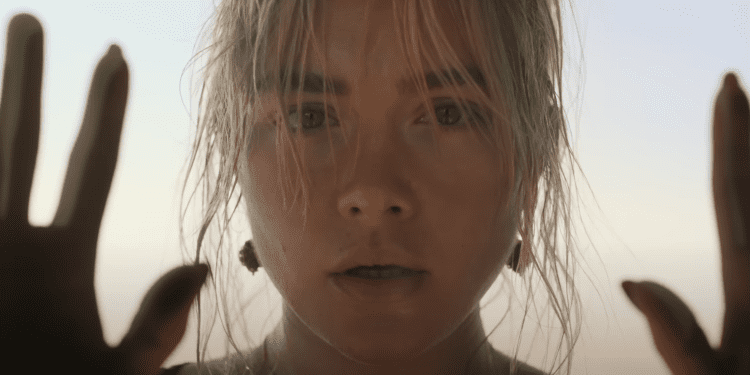 A second trailer has dropped for Olivia Wilde’s latest psychological mystery, Don’t Worry Darling, which is set to debut in theatres later this year.

Warner Bros. Pictures just released more footage that teases the mystery at the centre of director Olivia Wilde’s upcoming psychological thriller, giving viewers a deeper look into the unnervingly perfect little town that sparks the story. The city almost seems like a hybrid between an Earthship colony out in the desert and a little cult, and it wouldn’t be the first time Midsommer’s Florence Pugh has had an unfortunate brush with a commune.

The story of Don’t Worry Darling will follow a young couple, Alice and Jack who find themselves lucky enough to be living in the idealized community that is Victory, an experimental company town that was created to house the men who work for the top-secret Victory Project, as well as the families of those men.

CEO of the company and town, Frank, seems to be equally a corporate visionary as well as a motivational life coach and is mysteriously involved in nearly every aspect of daily life in their little tight-knit desert utopia.

The husbands of the seemingly sleepy community spend every day inside the Victory Project Headquarters, doing their work to ‘develop progressive materials’, and while the cats are away, the mice play. The wives of the idyllic community – including Frank’s equally perfect and elegant wife Shelley – spend their time enjoying the beauty, luxury, and debauchery their company community has to offer.

The company ensures that every resident’s every need is met, in return for discretion and unquestioning commitment to the Victory Cause, but when cracks in their idyllic lifestyle start to form, exposing flashes of sinister secrets lurking just beneath the surface, Alice can’t help questioning the community. Just what are they doing in Victory? And why?

The star-studded cast of Don’t Worry Darling will consist of many well-known names and some not-so-well-known ones. First, we have the Oscar-nominated main lady, Florence Pugh, whom you might know from titles such as Little Women and Black Widow. Starring alongside her is Harry Styles, from Dunkirk, and better known for his hugely successful music career. The two will be playing the principal couple, Alice, and Jack respectively.

They will be joined by Olivia Wilde (who is also the director of the film) from Tron: Legacy, Gemma Chan from Crazy Rich Asians, KiKi Layne from The Old Guard, Chris Pine from All the Old Knives, Nick Kroll from How it Ends, Sydney Chandler from Pistol, Kate Perlant from Once Upon a Time in Hollywood, Asif Ali from WandaVision, Douglas Smith from Big Little Lies, Timothy Simons from Veep, and finally Ari’el Stachel from Law and Order: Special Victims Unit.

The Booksmart director will be making use of a screenplay written by Katie Silberman who is known for working on the same title. The original story was written in part by Silberman as well as mother-and-son duo Carey and Shane van Dyke.

At a recent CinemaCon event, when asked about her upcoming project and comparing it to mind-bending classics like Inception, The Matrix and The Truman Show, Wilde shared: “It’s my love letter to the movies that pushed boundaries of ambition. It’s ambitious, but I think we made something pretty special.”

Don’t Worry Darling is scheduled for release on 23 September 2022 and we can’t wait to explore this mystery.

What are your thoughts on the new Don’t Worry Darling trailer?