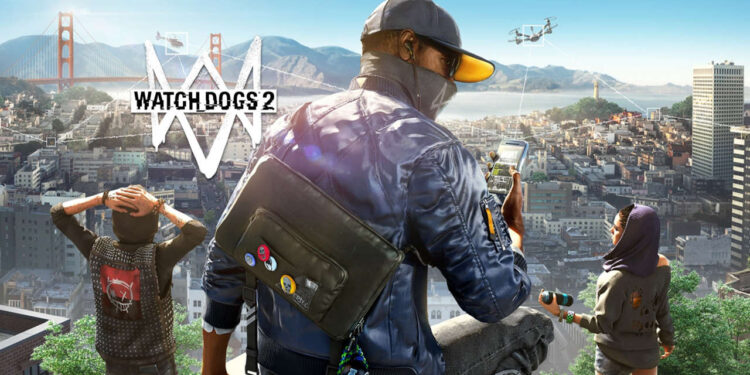 We’ve all probably been gripped by the fear that somewhere, somehow, someone is monitoring or even watching us, using our own technology against us (they could be watching you right now). It’s a fear many of us face each day. Throughout the years the concept of Big brother and those that dare take up the fight against it has been explored in various games. Watch Dogs was touted as yet another game that would be delving into the intricacies of cyber security and hacking. Unfortunately, even though the game did offer us the opportunity to hack into our surroundings, it ended up not delivering on many of its promises. Watch Dogs 2 has decided to right the wrongs of the past and deliver on the promises that its predecessor made. [dropcap]W[/dropcap]atch Dogs 2 introduces us to the franchise’s new charming protagonist Marcus Holloway, a gifted and enthusiastic young hacker who along with his team of hacker friends called DedSec decide to take on ctOS and release the city of San Francisco from its pervasive and tightening grip. It’s quite a shock being bombarded with Watch Dogs 2’s colourful visuals and even more colourful cast of characters, since the original game’s city felt dreary and protagonist Aiden Pearce came across as being quite bland. Where the original game was driven by a gritty narrative of revenge, Watch Dogs 2 takes this same narrative of revenge but dresses it up in a nice colourful two-piece suit, flips it on its head and dips it in loads of pop culture references (sometimes these can be a bit overwhelming and feel overdone). This doesn’t mean that the game doesn’t have its fair share of serious moments; it’s just that they are handled in such a way that stops the story from becoming too dark or depressing. Nowhere is this truer than in the game’s cast of weird and wonderful characters.

[pullquote]Not only did I find myself caring for the team of rag-tag hackers, but I also became invested and cared about their fight to save San Francisco from ctOS and the Evil Blume Corporation.[/pullquote]

Initially, I struggled to connect with the game’s cast of millennials, from the crazy guy with the weird animated mask to the girl with the purple hair, but as I progressed I found myself warming up to them and at the end even liking them. This is in part thanks to the conversations that Marcus has with his team. From who would win in a fight between the Alien and Predator (Predator of course) to which Star Wars character they would like to be (Han Solo all the way), each conversation feels natural and starts to colour in each characters personality. Each member of DedSec brings their own unique flavour to the narrative, from their reactions to the way they approach the problems the team faces. Not only did I find myself caring for the team of rag-tag hackers, but I also became invested and cared about their fight to save San Francisco from ctOS and the Evil Blume Corporation. While on the subject of San Francisco, It’s is amazing what a change of scenery can achieve. Gone are the grey, dark grey and sometimes light grey colours that saturated the city of Chicago. In its place, we find a brightly lit and colourful city that feels alive with activity. San Francisco is a city filled with all kinds of collectibles, side-missions, and activities and begs exploring. The city feels distinctive and varied from Silicon Valley to the center of San Francisco, these offer unique environments for the players to explore. Each area is alive and filled with tons of NPC’s going about their daily activities. I’ve seen a random dude attacking someone’s car with a baseball bat (of course I made him pay by hacking into his bank account), a guy flirting with a woman who clearly wasn’t feeling it and even people walking their dogs (so many dogs). Watch Dogs 2 creates the sense that each of these NPC’s has their own lives and backstory.

Of course, what is great scenery without some ingesting and fun gameplay and luckily Watch Dogs 2 doesn’t disappoint. Marcus (just like Aiden) has the ability to hack almost anything around him. Guy in the car in front of you driving too slow? Then why not hack into his car and let it veer off the road. Need some extra cash? Then quickly hack into one of the inhabitants of San Francisco’s bank account and take a little something for yourself. I was impressed at how easily I was able to hack into my surroundings, even while careening down the street at high speeds or being chased by the police on foot. Where hacking was a nice little feature in the original Watch Dogs, in Watch Dogs 2 it plays a far more prominent and important role, as most missions can be completed just by hacking the various systems surrounding you. Missions usually consist of infiltrating a building of some kind and downloading some really important data. There were many occasions where I completed these missions without setting foot in the target building itself (this made me feel like a true hacker). Through the use of some of the new toys available to Marcus such as the quad copter and remote control car I was able to complete my missions without my foes even knowing I was there (like a cyber-ninja). Hacking quickly became second nature, and in no time I was hacking into some of the most secure building in San Francisco. Each mission is surprisingly open-ended, and it’s completely up to you how you wish to complete them. You can sneak to your objective hacking as you go, grab a gun and shoot everything that moves or just rely on your hacking skills and toys. How you approach each mission is left completely up to you.

Marcus doesn’t start off as the omnipotent hacker that he becomes by the end of the game. Instead, you begin the game with a set of basic skills. By completing missions players are able to earn research points which allow them to upgrade Marcus’ skills significantly. By using his cell phone Marcus is able to interact with the world in quite a clever way. The apps that Marcus downloads on his phone allows him to, for instance, download songs, upgrade his abilities, become an Uber driver or just accept a mission. This fits in well with the atmosphere and feel that the game tries to create.

Although Marcus comes across as someone who prefers his cell phone and laptop to a gun the game does offer you the ability of acquiring/purchasing weapons. Now while I do get that some people might want to grab a gun and create havoc (which can be fun in itself), I found it most rewarding when relying purely on my hacking skills and stun gun (did I mention that it takes enemies down in one shot). I’m not saying that there is a “right” way in which to take on the game’s open-ended missions it’s just that narrative wise I found it quite disjointing that Marcus would all of a sudden pick up an automatic rifle and start shooting everyone. As someone who not only sucks at playing stealthily, but also tends to not enjoy this play style I actually found myself loving being all stealthy and ninja-like in Watch Dogs 2. Playing stealthily doesn’t necessarily mean no one dies as there were quite a few times where I hacked into a vehicle and drove over an unsuspecting guard (again and again). Some of the best moments I had in the game were discovering how to combine my hacking abilities in a way that even surprised me sometimes. At the end of my play through I was amazed to realize that I didn’t use a weapon once (except for my trusty stun gun) and I still enjoyed my time playing Watch Dogs 2 thoroughly.

Something I did quite a bit of was driving. Personally, I found the driving in the original game to feel a bit floaty. In Watch Dogs 2, the driving mechanics have been vastly improved (although there is still some floatiness), as cars feel more responsive and are actually fun to drive. Even though the game does offer quite a generous fast travel mechanic, that is available right from the start, and although this might make travelling across the map a lot quicker, I did find myself preferring to drive most of the time (this is a testament of how much better the driving feels). Watch Dogs 2 offers a seamless drop-in, drop-out multiplayer, where players can invite their friends for some co-op hacking action, invading a rival’s game stealing their data or even taking them on in bounty hunt missions. Unfortunately the seamless multiplayer is currently not working as Ubisoft is busy trying to fix some of the issues.

What surprised me time and again about Watch Dogs 2 is that it was able to take some serious subject matters (such as race, right to privacy etc.) and handle it in such a way that makes it light hearted without taking away from the seriousness of these subjects. With it’s fun and engaging story, that doesn’t take itself too seriously, likeable characters, a beautiful world to explore and interesting hacking mechanics Watch Dogs 2 has done what the original game couldn’t. It has gotten me exited for a franchise I had thought dead. Watch Dogs 2 encourages creativeness, and allows the player to approach each mission as they see fit. Hacking has never been so much fun.