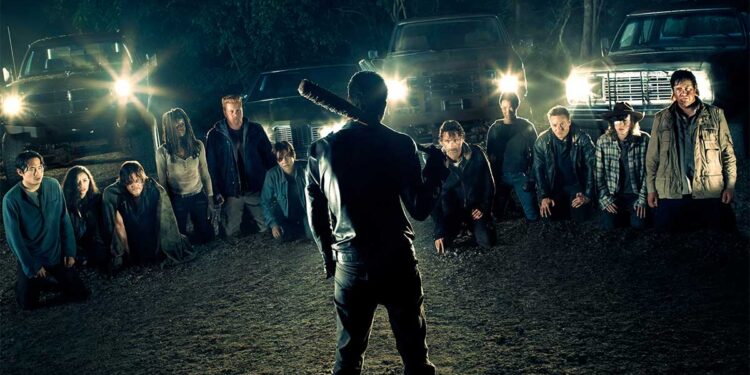 I was actually a bit hesitant about writing this review, mainly because it meant having to relive the entire episode in all of its inhumane glory again. Wow. That was an intense hour of television. I’m assuming that if you are reading this that you have already watched the season 7 premiere of The Walking Dead, and consequently, you have lived through it. Fortress of Solitude posted its own theories of this episode sometime last week and gave our readers the opportunity to vote for who they think will meet Lucille. I must say, the polls were pretty much spot on, so give yourself a round of applause.

So there was a lot of hype going into this episode, which is putting it lightly. Needless to say, The Walking Dead delivered on every front with one of their best, most intense episodes yet. When the episode started with the aftermath of Negan’s killing spree I got a bit worried that they were going to drag the reveal out until the very end. Fortunately, the episode took an unexpected turn and had Rick think back about the traumatizing moment, which is so much more effective when you think about it. While watching Rick recount the savagery of Negan’s kills, one cannot help but to know that the way you are feeling is precisely what Rick is feeling at that very moment upon recollection, times a hundred.

Yes, it would have been just as effective to jump into the big reveal right of the bat (Yep!), but the intensity that was building towards the reveal, even after months of waiting, had to be thickened again. We haven’t seen these characters in a very long time, so it was necessary for us to get to see Rick and the gang for a few minutes before the attention switched to Negan again. Much like the episode, this review is also taking forever to get to the one thing you probably want to read about. So let’s get to it: Abraham and Glenn!!!! I won’t lie, I felt nauseated during the entirety of that scene. Of course, the big reveal was that it was Abraham who bit the dust. Even though it literally could have been anyone, the moment of impact and the reveal of Abraham being at the receiving end of season six’s first-person view cliffhanger, I could not help but feel a bit underwhelmed. Abraham’s death has been theorized since the season 6 finale, and I kind of anticipated it. So yeah, the episode lost a bit steam and I was ready to feel disappointed.

BUT THEN! What followed was the most heartbreaking, brutal and intense 20 minutes of television I have ever seen. I remember going through the tweets about the episode and one brilliant son-of-a-gun said that this is what it would have been like if the Red Wedding was an hour long event. I couldn’t have said it better.  From the fear that Daryl would pay with his life for his outcry, to Negan’s second monologue and then the sudden second kill. It was a moment that felt like eternity. Having Glenn live through the first hit (which is directly lifted from the comics), is probably the most tear/vomit-inducing part of the episode. He never once took his eye(s?) off of Maggie because he knew that this was probably going to be the last time he would get the chance to look at her. It was heartbreaking stuff. To make matters worse, Negan left him to live for longer than was needed, just to see him and the group (and the audience) suffer through it a bit longer.

So that was supposed to be it. But then Negan decided that Rick still needs some traumatizing and decided to have him chop off Carl’s arm with an axe, which would have been a very cool parallel to Rick’s comic-book counterpart. Ultimately, Negan decided to give Rick the benefit of the doubt and spared Carl his southpaw, but it was still an intense moment to watch.

An episode of this caliber would not have worked were it not for the actors and director bringing their very best to the material. The camera work here was absolutely phenomenal. We’ve seen some claustrophobic moments on this show, but none of them compares to Greg Nicotero’s direction here, even if much of the episode took place outside in wide open spaces. Andrew Lincoln should win an Emmy for his performance here. Even though his dialogue was limited, I didn’t once not know what he wanted to say or what he was thinking. The real stand-out here, as you might have expected, is Jeffrey Dean Morgan’s Negan. He continued to be the psychotic presence that he started out as in his brief season six appearance, and he did so with gusto. Someone as downright evil and detached as Negan can easily become a caricature of himself, but Morgan injects just enough mannerisms and wit into Negan to keep him from becoming repetitive. He has you on the edge of your seat, and he doesn’t even have to ask. The only negative thing I will say about this episode is the final scene where Rick has his “what if” vision. The dream-like scene showing the group having what I can only assume is Thanksgiving-dinner felt forced and unnecessary. You could almost hear the writers saying “Oh, you aren’t crying yet? Well this definitely will!” Sure, it was sad to see what could have been, but come on. We already know that Glenn will never get to hold his baby and that Abraham will never be able to show off his magnificent flat-top again. No need to rub it in.

Needless to say, I’m excited for what the rest of the season will bring. We already know that Daryl is Negan’s new pet, Rick is broken and that The Kingdom and Hilltop will start playing larger roles. Also, where is Carol and Morgan and how are they going to react to the news? And there is just no way that Maggie is keeping that baby. It’s going to be an exciting season, as long as they manage to keep the tone and intensity of the premiere intact.