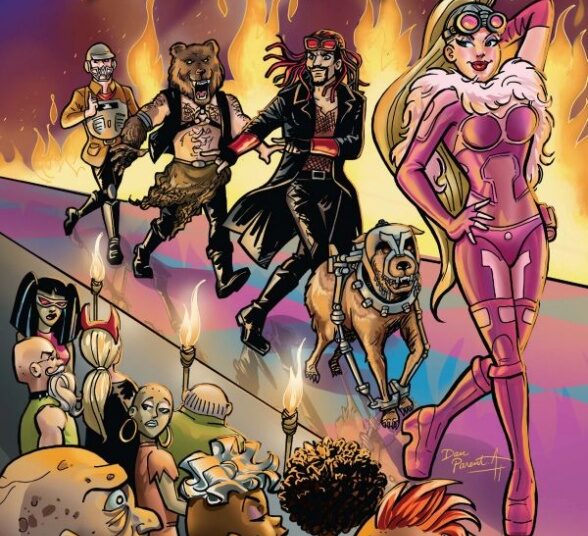 As if it’s suddenly received a massive turbo injection of nitrous, the latest issue of Wacky Raceland (Wacky Raceland #5) hits top speed, but can it hold together? [dropcap]W[/dropcap]hen a race stopover allows our competitive freaks and geeks a little downtime, it seems like a good thing. Except they all decide to eat the local magic mushrooms, and before you know it they’re all tripping like it’s the third day of a concert festival. Each racer’s reaction is different, from the tragic Dick Dastardly mourning the loss of his family to Penelope Pitstop who’s happy to enjoy a jig. There’s some vomiting, some swearing, some freak-outs… but there’s also something else: an awakening of dark memories amongst some of the racers.

It appears that many of them (if not all of them) became genetic test subjects in a place called the Butcher Shop before the race began. Once they’ve all recovered, Dick explains about the logo markings which he’s spotted on the mutated monsters of the post-apocalyptic wasteland, and it becomes clear that there’s a conspiracy afoot. But with The Announcer attempting to block their return to the Butcher Shop to find answers, the truth isn’t going to be easy to learn. The shocking origin of Muttley is revealed, and it turns out that one of the racers has a secret which nobody could have suspected… This has been an uneven series so far, but again readers are given a rather unexpected treat.

The big mystery up to now has been a simple one: “WTF is going on?!” Unfortunately, in previous issues it’s been somewhat on the back-burner and hasn’t been explored as much as it probably should have. However, here we’re given a whole lot of information about it without being told everything, and it works. In fact, it’s suddenly upped the stakes considerably and offers one of the most intriguing cliffhangers in a long while. Curiously, it may even tie in with ideas being used in another series, although whether it’s a genuine crossover or just a tip of the hat remains to be seen.

Leonardo Manco’s art is once again on form, and still carries a sense of fast-paced anarchic energy which has been one of the series’ strengths. While the general offensiveness of this title is still there, here it seems more justified and this book definitely has its own identity. It’s hard to tell if the sudden acceleration in plot is due to low sales, critical disapproval, or maybe even the title getting canceled, but the storytelling here is a real step forward.

Wacky Raceland has been a love-or-hate comic book, but if you’ve stuck with it up to now (or are simply curious as to why a somewhat beloved kids’ cartoon has become an adults-only carnival of chaos) then you’ll love Wacky Raceland #5.