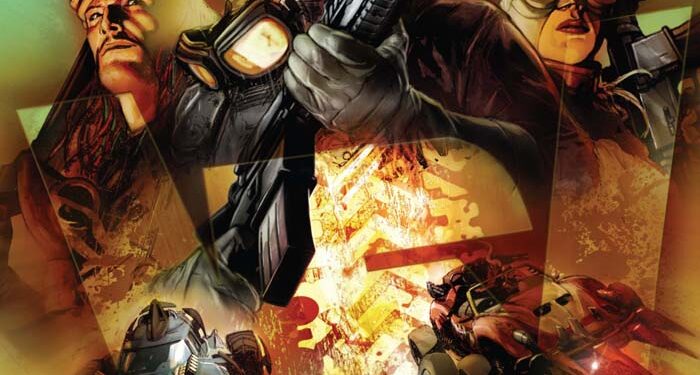 Viva Las Vegas! After another exciting leg of the race through post-apocalyptic America (which we didn’t see), our degenerate anti-heroes need some well-deserved R&R and so they take a time out in Vegas. However, things go wrong once again as they’re all taken prisoner and their cars are impounded. Why? Well, it all has to do with the Red Baron and how someone has a personal score to settle with him. What nobody was counting on is how loyal he cars are to their drivers, and Dick Dastardly’s pooch Muttley being the key to the whole rescue operation. I’ve developed an odd love/hate relationship with this series since it began.
This series is pointlessly offensive and has a plot so thin that it’s practically anorexic. It’s also gleefully anarchic, looks amazing and has some of best-written personal tales you’ll find in all of comic books. Because of this contrast it bounces back and forth in terms of quality and readability and, this time, unfortunately falls back into the negative.
There’s some lip-service paid to what appears to be the big mystery of the wacky race itself, but it’s brushed over pretty quickly. The interpretation of the post-apocalyptic Vegas is intelligent and savvy, but then degenerates into just another crazy backdrop for the story to occur in without being taken full advantage of. Then there’s this issue’s spotlight, which falls upon the Red Baron. His backstory is somewhat rushed, and while it’s meant to be tragic it all feels a little too obvious. It’s good that every character appears to be getting an issue to shine, but it’s coming at the expense of the others. Dick Dastardly, clearly the most interesting character so far, does next to nothing in this issue. Penelope Pitstop, who’s always been a source of focus, does even less and is hardly noticeable. This wouldn’t be as big a problem if the Red Baron himself had been more interesting and helped save the day, but he doesn’t. Instead it boils down to the sentient cars, and that’s a problem.

The action is less focused this time around and a whole lot less impressive, and unlike previous issues there wasn’t much fun in this story at all. The idea of having mini-adventures bookending a personal tale does work in general, but not this time out and more focus on the bigger picture at this stage would have been good.

In terms of the journey into Wacky Raceland, this issue seems to have hit a speed bump badly, developed a flat, and is almost running on empty.