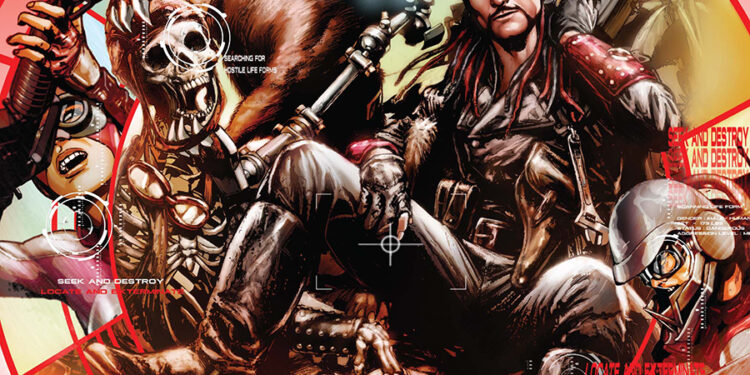 Never before has a second issue redeemed itself this much after such an awful start, with Wacky Raceland #2 offering one of the most tragic, emotional tales ever. Also, to use the vernacular, Wacky Raceland sucks!!! [dropcap]T[/dropcap]hat may seem a little schizophrenic, and it’s justified. Seriously, I’m handing out an A-grade here on an issue of a comic book that’s honestly not very good. The reason for that is because the main plot in Wacky Raceland #2 threw me for a loop and pulled at the old heartstrings. It doesn’t change the fact that this reboot is looking like one of the worst ideas since the inflatable dartboard, but hear me out.

It’s time for those post-apocalyptic, mutated freaks known as the Wacky Racers to hit the road once more and make their way through the nanite-and-zombie-infested wasteland. Which means they just drive around, trading insults and trying to not die. That’s it. There’s no big adventure here, and no big moment of Tank Girl-inspired heroism from Penelope Pitstop. In fact, nothing happens of any significance at all.

So why the great rating? What is which makes this issue one of the most surprising comic books ever? The answer is simple: Dick Dastardly.

Fans of the old show may remember that while he was the stock villain, he was also rather unfairly treated. He even won a race or two on occasion – or should have – except he was judged to have cheated (which is funny, since there were no race rules) while others were awarded first place despite having done exactly the same sort of things he did. It was a double standard, and hypocrisy of the highest order. As such, Dick Dastardly could be viewed by purists as a sort of anti-hero to cheer for. In Wacky Raceland #2, his back-story takes centre stage and it’s a tragic one. It turns out that, before the apocalypse, he was a classical pianist with a wife and child. Arrogant, yes, but a devoted family man who loved those closest to him. When the nanite plague hit, he was faced with an impossible decision to either try and save his family, which would have probably resulted in all three of them dying, or to watch them suffer. He chose the latter, and has been haunted by their deaths ever since.

His only motivation for racing is that if he wins, his family can be returned to life through advanced genetic engineering. Now, finding the concert hall where they died, he takes to the piano to play one final song for his lost wife and child amidst all the death and destruction surrounding him.

It’s a virtuoso performance, not just from Dick Dastardly but from writer Ken Pontac too. With some deft touches, Pontac not only turns Dastardly into a tortured hero but creates one of the most haunting pieces of storytelling in recent years. It’s truly astonishing.

The problem is that the Wacky Raceland series itself isn’t looking very good. It still comes across as pure tasteless anarchy just for the sake of being different, and has very little else story-wise as they follow the race-and-repeat formula. Still, if the series continues in the same artistic vein of this issue then they may be able to make it a winner in time.

So maybe Wacky Raceland does suck. It doesn’t matter, because Dick Dastardly’s tale is so damn good here. I’m still not recommending this series, but I’m giving this particular issue some much-deserved and well-earned credit.