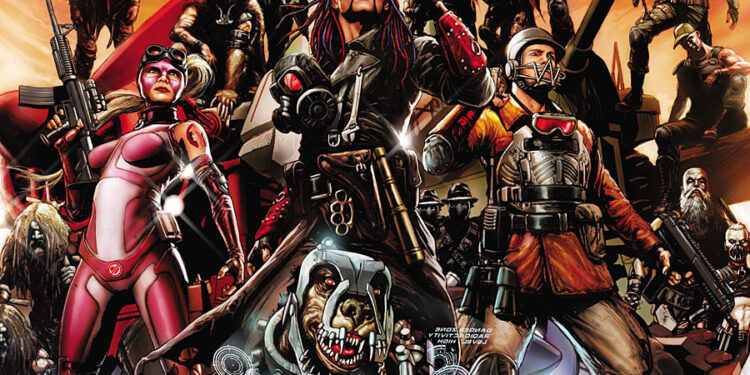 Wow. Uh. Okay. I feel like I’ve just been hit in the head with a frying pan. That’s because I just read the latest updated Hanna-Barbera comic book Wacky Raceland. All the old characters (and their turbocharged vehicles) from the ’60s TV series are there, from Penelope Pitstop and Dick Dastardly to Professor Pat Pending and the Ant Hill Mob, and the format of the race is the same as it ever was: cross the finish line first, no matter what. And that’s where the similarity ends. [dropcap]P[/dropcap]repare yourself for a Mad Max/Death Race dose of mischief, madness, and outright mayhem. It’s a race through a typically post-apocalyptic wasteland, and the characters have been redesigned into a group of sexually-aggressive, mutated, foul-mouthed, alcoholic, bigoted, ultra-violent, transgender heroes and villains. When the opening scene shows their artificial intelligence-enhanced vehicles chatting while someone’s vomiting, you know times have changed.

Each racer and their vehicle has been plucked from potential death by “The Announcer”, a mysterious voice which has rescued them for an unknown purpose. Each racer has been enhanced and outfitted to provide them the maximum chance of survival, and their vehicles have become state-of-the-art, all-terrain mobile weapons of destruction. Now they must race through this desolate wasteland where anything can happen. The final winner will be allowed to enter Utopia, escaping the nightmarish reality of the Wacky Raceland.

As plots go, that’s simple but effective. The new-and-improved Penelope Pitstop is tough and savvy, could just be the next Tank Girl for comic book fans. However, long-time villain Dick Dastardly steals almost every scene, now being presented as a sympathetic loser who deserves better. The art is undeniably stunning, a slick style showing the inventiveness of this series, with each character looking fresh and new as if they were created in the future, not nearly 50 years ago. It’s a bold re-imagining and one which works in many ways.

[pullquote]While the changes on display are hard to accept initially, Wacky Raceland does have potential. [/pullquote]

Unfortunately, if you grew up watching the original Wacky Races, it may seem like an abomination and can be immediately off-putting. This isn’t cute, cuddly or funny; it’s hardcore and a massive shift from the original. The writing in this issue catapults the reader into the thick of things with little set-up or explanation, and shifts between the past, present, and future so jarringly that there’s no chance to settle into the story.

The backup story featuring Lazy Luke and Blubber Bear is intriguing, and it’s good to see the background of other racers being expanded upon. However, whether any of this will pay off in the future and elevate the background characters into major players will only be known in the future. For now, as with the originals, Penelope Pitstop and Dick Dastardly are the main focus and it’s hard to imagine anything upsetting that status quo.

While the changes on display are hard to accept initially, Wacky Raceland does have potential. It has to be said that if this appeared without the Wacky Races link, it probably still would have been a creative story and one well worth reading. The Wacky Races license both hinders it and legitimizes it, creating a level of familiarity instantly but also potentially alienating some long-time fans. However, if you’re just looking for an adrenaline-fueled thrill-ride and an ass-kicking (but playful) heroine then this satisfies on every level.

It’s a shocking start for a new series and it isn’t recommended for kids, but it’s a comic book which could accelerate into a great series pretty quickly. Roll on, issue 2!