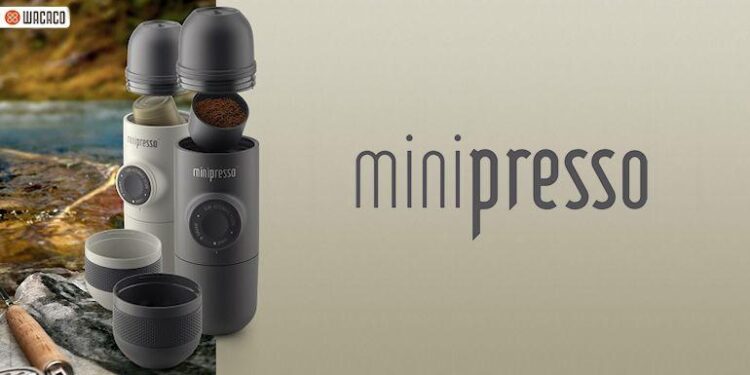 Having your coffee on the go and outdoors is nothing new. I think back to a few Westerns whereby the cowboys would sit around the campfire heating water for their brew. Over the years, there have been numerous portable, outdoor coffee brewers, but with varying success and ease of use. The Wacaco Minipresso Portable Espresso Maker is an attempt to rectify this, by offering a well-brewed espresso, whether you’re at home, at the office, out camping, or just don’t want the hassle of using any of your electrical appliances. Two thoughts filled my mind upon unboxing the Minipresso: one that is somewhat heavier than I expected for a portable unit, and, two, that there were a lot of parts to work with in putting it together. But, in the end, neither of these two facts caused any issues, and, perhaps, even aided the brewing process. Irrespective of its 360g weight, the unit remains compact, so much so that you’re easily able to carry with you onto a flight in your carry-on, or even in your coat or hoodie pockets, as it measures 175x70x60mm. But, all that said, the thought of carrying an espresso machine on your person is an achievement unto itself. The Minipresso was designed to be the smallest and lightest of its kind, a fact Wacaco can be proud of.

The components are made up of the main flask through which the water is pumped, portafilter basket to house your ground coffee, filter cap, water chamber, a scoop, and the cap, which doubles as a cup to pour your espresso into. The secret lies within the flask, which includes a piston, which is used to pressurise the water and work its way through the ground coffee for your espresso. Overall, the unit is well made, and the components are easy to clean, simply by rinsing them under hot water after each brew. In hindsight, the process is simple to figure out, but there are a few variations to making each type of espresso. The simplest method to use is to fill the portafilter with ground coffee, place it in the filter cap, screw that to flask, add the water to the chamber, screw that to the flask on the other end, and you’re set to start pumping, literally. By pumping the piston 6 to 7 times, the unit builds up pressure and fill the flask with the water. The subsequent pumps are to extract the coffee and fill your cup as desired. The variations in pumping creates different types of coffee; 13 for a ristretto, 18 for an espresso, and 28 for a double espresso.

In use, however, things aren’t always as straight forward. For starters, the pressure build up is determined by the heat of the water used, and can vary between 6 and, even, 12 pumps before the pressure is built up. On my first use, I simply pumped the piston until all the water had passed through the flask into my cup. Another fact I became familiar with after the first use is that the brew wasn’t quite as hot as I hand wanted. It is suggested, thusly, that before each cup, you flush hot water through the unit, in the same manner used to make a cup, to heat up all the elements internally. A glaring obvious technique, but sometimes forgotten. While the instruction is to lightly tamp the coffee into the portafilter, I would suggest not doing so, as it makes it easier for the water to pass through in order to achieve a stronger brew.

One really annoying factor for me was having to unscrew each of the parts again after making a cup of coffee, often to make another. Since the unit has been pressurised, unscrewing directly after use does mean some of the remaining water may cause a small burst. Not much, but still concerning, since it’s still hot. And on that point, there’s still water remaining, which sometimes cannot be flushed by pumping. Often when making a second cup of espresso, the unit builds up pressure much easier, most likely because of the heat, which then also makes it more difficult to press down on the piston. You’ll have to, then, leave the unit for a second or two before you can press again to continue extracting your coffee. I did find that things are a little easier when making a single cup, and enjoying that before going back to clean the unit. The pressure would subside and there’ll be no burst of water and air from the unit when opening.

All said and done, the quality of coffee is very good, although a lot of that is also determined by your type of ground coffee, etc. Each cup of espresso also has a nice crema at the top, adding to the pleasing taste and smell from the brew. The Minipresso is a very portable unit, and makes a really good cup of espresso on the go. The unit carries a recommended retail price of R1,280, which isn’t as affordable as many would like, but considering the cost of purchase for a really good cup of espresso, often 3 or more times per day, the unit will easily pay for itself within 3 months. The negatives, as discussed, are only a matter of patience when using, and are more annoying than debilitating. The only true limitations to the Minipresso is the ability to find hot water when on the go, but if you can find a source, then you’re all set. 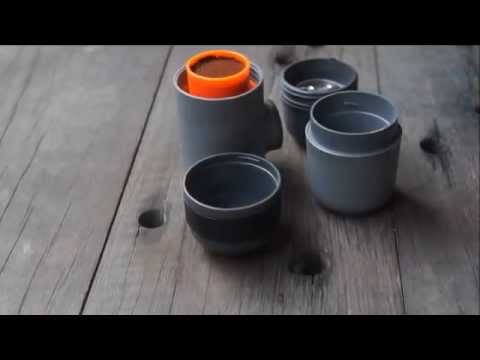