Vostok Inc. Review – More Fun Than A Clown On Fire

Much like the other Badlands Indie game I reviewed recently, Anoxemia, there is something disturbingly addictive about Vostok Inc. It could exist as a mobile-only game quite comfortably but still works on console.

Bernie Sanders is a dick. Stick with me for a sec and I’ll explain. He is a socialist. He believes that rich people should be taxed out of existence and that “Big Business” is evil and everything should belong to “The People”, who in reality are all the snowflake liberals who spent R200K of daddy’s money on a degree in gender studies with a minor in lesbian dance theory and are pissed because they can’t get a job that pays them six figures. I could go on, but the bottom line is socialism is a shitty proposition in theory and even worse in practice. Trying to grow an economy through socialism is like trying to pick yourself up by your boot laces; it just does not work. Never has, never will. “So what will work, Donny?” I hear you ask. CAPITALISM!

That’s right. Good old capitalism, where your willingness to take a risk on starting your own business is rewarded if you work hard and do it right, provide the market what it wants at a price that they can afford. The invisible hand of the free market guiding the economy by rewarding excellence and punishing mediocrity. That’s how a country gets rich. And that’s how you get rich in Vostok Inc. Well, sort of. There is also a degree of a-hole-ness involved, but let me start at the beginning.

Vostok Inc. is a game of intergalactic capitalism. In its most basic form, it is a clicker that encourages you to grow your empire by mining the various solar systems for minerals that will make you filthy stinking rich and you do this incrementally. Literally, hundreds of thousands of clicks as you mine and screw the galaxy and your opposition to a level of wealth that just becomes ludicrous.

Setting up a mining station on a planet, upgrade said station, reap the planet and move on to the next. Make moolah. The repetitive cycle takes you into a beta state where you see the entire galaxy at a glance and the money flowing from various sources into your bank account that gets so large that they start making up numbers. At least, I think they are made up numbers. I don’t know if a quintillion is a real thing, but I have 100 billion of them.
But it’s not enough. It’s NEVER enough! And that is the genius of this game, and why I love Badlands Indie Games. You just can’t stop playing. Even with 100 billion quintillions of moolah in my account, I still find myself making morally reprehensible decisions, like not issuing my workers basic health and safety gear because I can save 5 moolahs per employee. 5 Moolahs doesn’t sound like a lot, but I employ several hundred thousand people, so add that up.

Admittedly, for those who don’t have the addictive personality I do, this cycle of discover, mine, make moolah, move on, could get boring pretty damn quick, but there is another side to this game which is pure 80s arcade-style space shooter. Think Asteroids mixed with Donald Trump.

I guess you would call this personality a twin-stick shooter, which, at least at first glance, would be the opposite of a clicker game. Clickers require you to work towards the future, where twin-stick shooters are here-and-now skill, but Vostok makes the transition effortlessly. 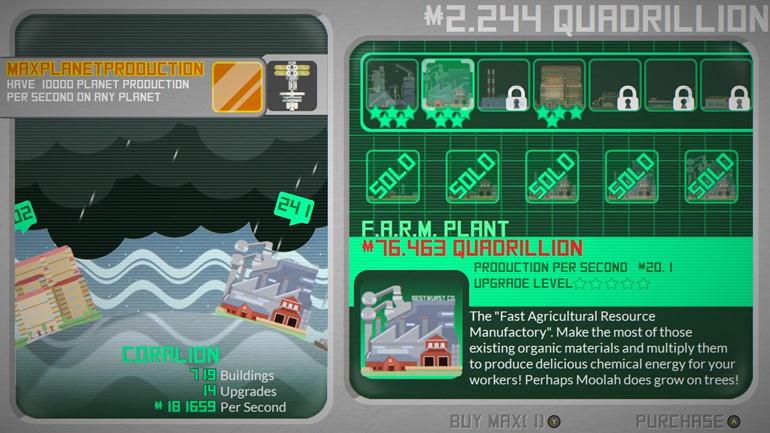 When not ravaging the surface of a planet for money, you fly around the cosmos in a little spaceship and shoot at everything that comes your way. The asteroids you shoot release golden nuggets, which you collect and turn to moolah, then various enemies appear and try stop you from taking everything. Not for any kind of altruistic reason, just purely so they can take it first and out earn you.

Like your mining stations, your spaceship is upgradeable, but that costs moolah. However, the more modern your ship, the more enemies you can defeat and planets you can mine. So, as the old adage goes, “It takes moolah to make moolah”.

Eventually, your success in the solar system grabs the attention of The Boss and defeating The Boss unlocks, you guessed it, another solar system. It’s maddeningly repetitive! I love it! I sometimes realise I’ve been in a kind of eye-open REM state for who knows how long, just going through the cycle again and again, completely subconsciously. I have a theory about this.

I really think that’s what’s going on here. One day they are going initiate a trigger and all the sub-conscious programming these games are doing is going to kick in and we’re going to lose that part of our brain that allows us to use logic and reason and we are going to be driven completely by feelings. In a word, they are subconsciously programming us to become leftists. Yech! So what to do what to do?

Vostok Inc. is more fun than a clown on fire and it mixes two genres that should not work together in a perfect oxymoron. So much so that I can’t imagine them apart now. I love this game, and at the price, recommending you buy it is a no-brainer. Now go and strip the galaxy of everything it has and become rich!