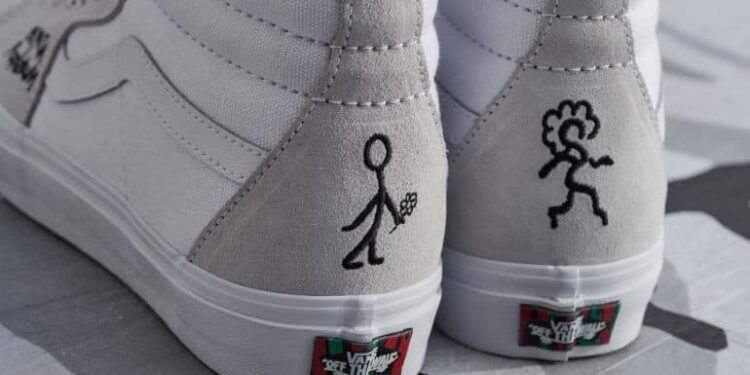 After teasing the collaboration in late 2017, Vans has confirmed the newly dropped range of sneakers with their partnership with A Tribe Called Quest and Sony Music’s innovative merchandising company, The Thread Shop. The collection features exclusive footwear from the Vans X A Tribe Called Quest, which sees a true creative homage come to life. The new collection pays tribute to the style, art, music and originality of A Tribe Called Quest’s outstanding contributions to music and pop culture since the early 90s. The inspiration for the footwear designs are drawn from their iconic album artwork and vibrant song lyrics embraced by the ’90s zeitgeist and beyond.

The Slip-On style includes designs and patterns from the cover artwork from group’s 2016 album, We Got It From Here… Thank You 4 Your Service. The patterns feature a mix of print and embroidered artwork throughout the upper. The Era silhouettes feature an all-over graphic print of album covers spanning all the way from 1990 to 2016. The Sk8-Hi includes odes to the well-known ‘Bonita Applebaum’ track along with album artwork. The shoe also features the printed lyrics on the shoelaces, quarter panels and lining. The final silhouette, the Authentic, features a truly special rendition, which honours the life of the late Phife Dawg, who passed away in 2015. The Vans X A Tribe Called Quest collection features a range of Vans classics from the archive, which includes the Slip-On, Old Skool, Authentic, Sk8-Hi and Era silhouettes in bold colours and prints, illustrating the group’s most favourite milestones of their career. The collection will officially drop on 6th April 2018 at various retailers and online stores across South Africa.

For more imagery from the range, check out my Instagram.