Vans x Marvel: New Range Of Off The Wall Superheroes 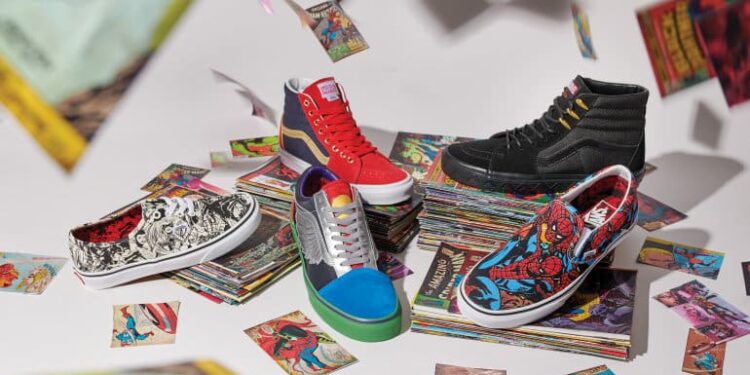 After teasing the upcoming partnership in March this year, Vans and Marvel have officially confirmed the Vans X Marvel collaboration, along with the release of the new range of sneakers, apparel, accessories, and the likes.

Following on from their previous collaboration, the team continue their line of retro-based superheroes from Marvel Comics over the years, both companies sharing a rich heritage rooted in creative expression.

The collection, called the “Off The Wall” Super Heroes of the Marvel Universe, features a number of different products, ranging from sneakers, caps, backpacks, and even socks. Given Marvel’s large line-up of superheroes, one would’ve been forgiven to think that most of the collection would include more group designs, such as The Avengers. Vans, however, have gone into great detail with the new collection, and features, alongside The Avengers, many other character-based silhouettes, including Black Panther, Deadpool, Iron Man, Hulk, Thor, Spider-Man, Black Widow and more – a massive line-up of 70-plus styles for fans of all ages. The Vans x Marvel collection get things started with footwear inspired by The Avengers. The superhero squad are represented on a custom Old Skool silhouette that has been outfitted with a unique colour story to symbolise key members.

In addition to this, there are matching selection t-shirts, hat, sandal and sock options for men, as well as a special checkered apparel pack just for women. The character designs are features on various silhouettes, including the Sk8-Hi, such as T’Challa’s vibranium suit, the Classic Slip-On, which showcases Hulk’s amazing strength as his feet burst through, in addition to various depictions with the Slide-On sandal.

There’s also a specially-designed collection for kids and toddlers, who can get in on the action themselves. Highlights from the range include kids-only footwear styles, such as the Sk8-Hi Zip featuring Spider-Man, Authentic featuring the women of Marvel pattern in full colour and the Classic Slip-On showcasing Baby Groot across Vans’ iconic checkerboard motif.

The Vans X Marvel collection is set to drop globally from 8 June 2018 and will be available at various prices at Vans retail stores and select retail locations. Fans can sign up now and get early access online and in store.