Throughout history, the mythical creatures called unicorns have been seen as peace-loving animals infused with happiness. Unstable Unicorns shines a spotlight on the darker side of these creatures. You’ll be summoning strange unicorn hybrids, betraying your friends, and basically causing all kinds of magical chaos as you try to get as many unicorns in your stable as possible. Just like the creature the card game is based on, the packaging for Unstable Unicorns feels magical to unbox.

The cards come packaged into a sturdy box with a magnetic strip on the latch. The box itself is covered in colourful, yet minimalistic art. This hides the fact that the game can be quite brutal.

Once you open the box you are greeted with two compartments, each containing a pack of neatly wrapped cards. The cards are divided into 114 black-backed playing cards (the main cards you will be using), 13 white-backed baby unicorn cards and 8 reference cards.

As with the colourful box, the cards have the same cartoony and whimsical art on them. From the “Unicorn on a cob” to the “Shark with a horn”, each card oozes charm and some even made us chuckle a few times. The cards are made of a really nice thick card stock that shuffles quite easily, thanks to their glossy finish.

Yes, Unstable Unicorns has some of the best components and packaging I have come across. Contrary to what you might think, Unstable Unicorns is all about building an army and stabbing your friends in the back. You will soon find out that there is little love lost between players during a session of the game.

Finally, each player is dealt five cards as their starting hand.

A turn begins with the first player drawing a new card from the black-backed card deck in the middle of the play space. The player may then play a card from their hand, place it face up in their stable, or draw another card.

There is a hand limit of seven cards a player.

Cards that can be played during a player’s turn include:

Magic cards – Cards with a one time (magical) effect which are discarded after use.
Downgrade cards -These cards are placed in another player’s stable and impose a specific negative effect on them.
Upgrade cards – As the name suggests, these cards grant specific positive effects to whoever has it in their stable.
Instant cards – These cards can be played anytime and interrupts a player’s turn.

Player’s take turns duking it out, stabbing each other in the back and basically trying to be the first one to have a pre-determined amount of unicorns in their stable. The player who achieves this is crowned the “Master of Unicorns”, or at least that is what we’ve come to refer to as the winner. What did we think Unstable Unicorns?

Initially, Unstable Unicorns impressed me with its visually striking and high-quality components, but I soon discovered that the game was just as magical as the packaging. It might seem simple at first, but it does have a surprising amount of depth.

Figuring out when to play which cards, when to interrupt another player’s turn and when to place a specific unicorn does take more strategic thinking than I initially anticipated. Having said this, the game was easy enough to teach that my 10-year old quickly grasped its mechanics and was betraying us like it was second nature. This is partly due to the short and on-point descriptions of each card. The artwork also helped in figuring out what each card does. 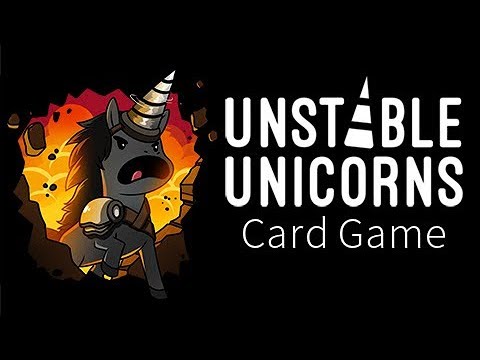 Unstable Unicorns falls somewhere between a filler game and the main game you would pull out for your board gaming evening. It’s deep enough to keep adults entertained but easy enough to grasp so that younger players and even those who aren’t board game aficionados can enjoy it.

Sure, you might lose a few friends after playing but as the game’s tagline states, “Unicorns are your friends now”. And what more do you need?

For more information on Unstable Unicorns, visit solarpop.co.za. The game retails for around R500 locally.

Unstable Unicorns is a brutal, fun and easy-to-learn card game about magical creatures stabbing each other in the back. Will you be the next Unicorn master?