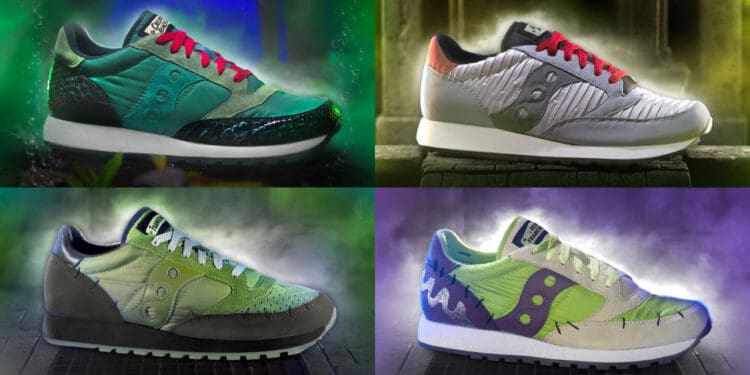 Saucony has partnered with Universal Studios to bring some of its classic monsters to life. The Universal Monsters X Saucony collaboration will bring the Monsters-themed sneakers through a partnership with Super7.

Four of Universal’s most iconic monsters from icon horror movies will be featured in the drop. This includes characters from films like Creature From The Black Lagoon, Frankenstein, The Bride of Frankenstein, as well as The Mummy. Each of the monsters will appear on the classic Saucony Jazz Original sneaker.

It isn’t the first time the trio have partnered for a Monsters drop. The first release appeared at the San Diego Comic-Con in 2018. It featured Dracula, The Metaluna Mutant, The Wolf Man and Frankenstein colourways. These were available at a special, Super7 pop-up store in limited quantities.

The reconstruction of the Jazz Original silhouettes sees unique colourways and finishings for each of the four Universal Monsters X Saucony sneakers. The Monsters’ logo is woven onto the tongue, with the Japanese embroidery on the heel tab.

Switching to the inner, it has a Super7 x Saucony custom sock liner. Additionally, each Universal Monsters X Saucony box is customised in the theme of the corresponding monster. 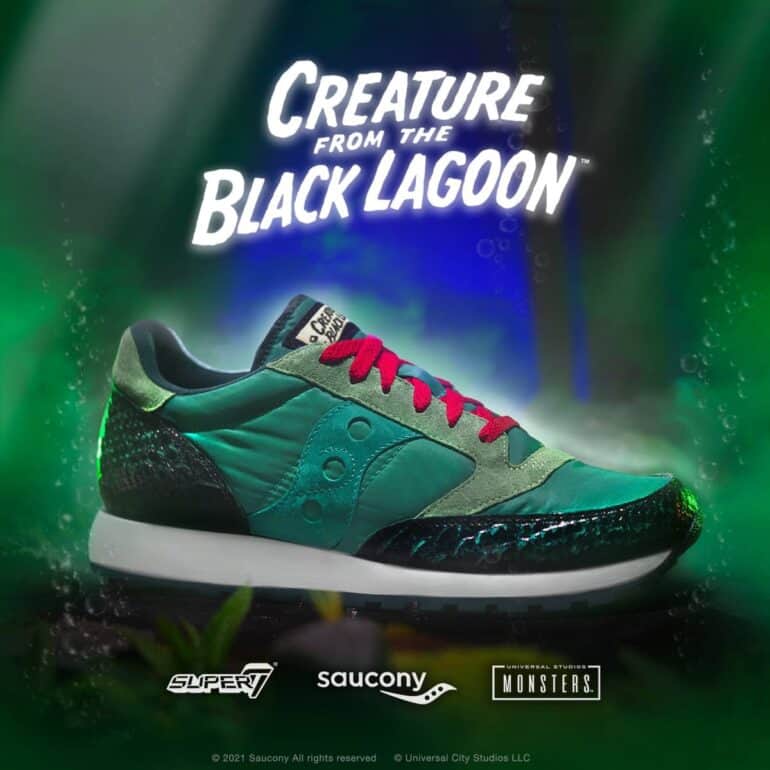 The Creature from Black Lagoon originates in the depths of the Amazonian jungle. The sneaker features a textured, scale-like material on the toe box and heel cup.

The colourway is a tonal green colour, accompanied by accented red laces to symbolise the Creature’s red lips. To round off the design, the outsole has a translucent swamp water green effect. 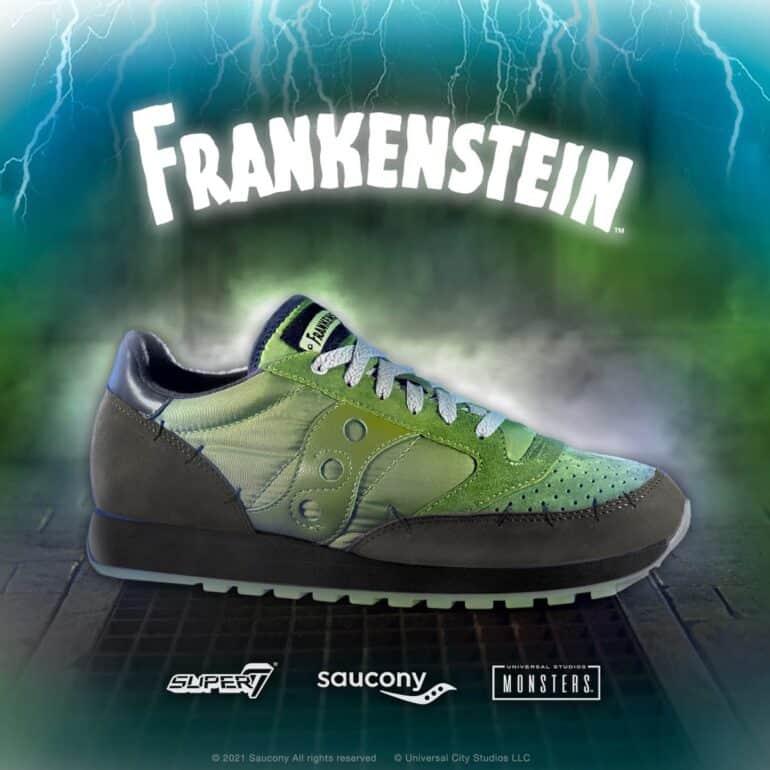 Expanding on the first Frankenstein sneakers, the new addition has shades of the monster’s green and grey themes. In addition, the upper features custom suture-like stitching for each panel atop the black midsole. 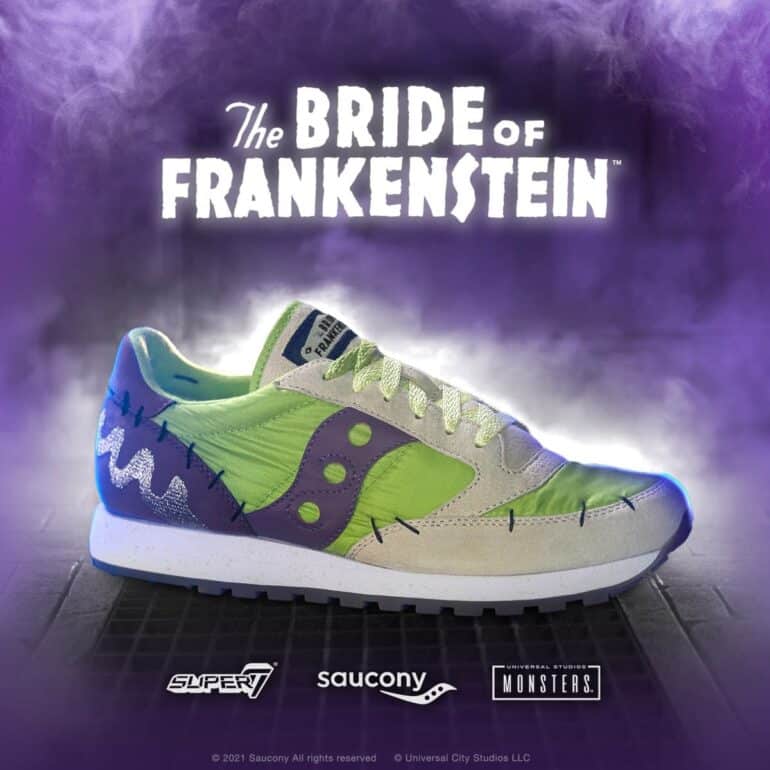 Every monster needs its match. This is the Bride of Frankenstein. The upper features pale green and ivory panels, which are stitched together.

The bride’s signature hairstyle is embroidered across the heel cup. The sneaker also features quite a number of glow-in-the-dark elements to imitate the lightning strike effects. These include elements such as the laces and speckled midsole. This can be seen in the image at the bottom of this post. 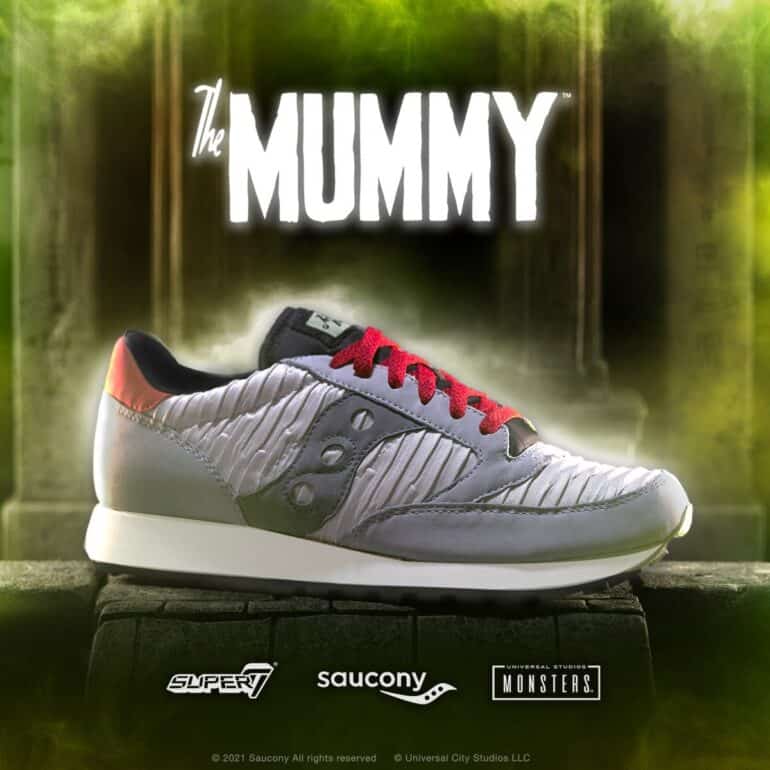 And finally, there’s The Mummy. After thousands of years, it has awakened. Inspired by the white wrap, the upper has a tonal white and grey palette. There are a few red accents thrown into the mix to resemble blood. The upper is crafted from a unique material meant to appear like bandaged fabric. Get ready to wrap your feet.

The Universal Monsters X Saucony sneakers will be available from this weekend at Super7 stores in San Francisco and San Diego only.

Unfortunately, it won’t be easy to get your hands on a pair from the collection. The retail price is set at $100. This isn’t bad at all considering other limited-edition releases.