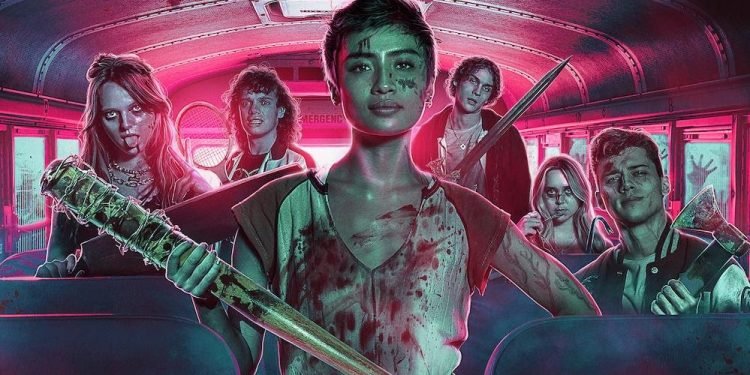 Drew Goddard’s The Cabin in the Woods defied convention and genre, flipping the script on everything the audience thought was real in the film. Now, Marcus Dunstan’s Unhuman aims to do the same for the zombie genre with a clever bait-and-switch horror comedy that’s as brilliant as it is risky. That said, it relies on an audience being patient, which isn’t always a simple task.

It’s impossible to discuss Unhuman without revealing the big plot point since it’s the key turning point in the film. To preserve the enjoyment of the movie and the integrity of the surprise, however, let’s cover the basics here and keep the secret close to the chest.

Unhuman follows a group of high school students who head out on a field trip. Before they can reach their destination, they are attacked by zombie-like creatures who cause them to scatter to the nearest point of safety. The different—and often opposing—personalities need to stick together and work as a unit to keep the zombies at bay. However, the more the story develops, the more something feels off about what’s taking place to these teenagers.

Unhuman‘s writers are Dunstan and Patrick Melton, who wrote four of the Saw films and borrow some of the moral fibre from their previous screenplays. While this new feature is nowhere near as gory or bloody as John Kramer’s playpens, the twist in the tale is as deliciously good as some of the big Saw reveals and involves a lesson or two. The question is, for who?

Patience is a virtue

The first act of Unhuman plays out as extremely generic. Much like every zombie movie, the people do stupid things and run around like headless chickens, trying to escape from the undead. This, though, is entirely intentional. It’s a deliberate setup from Dunstan to make us believe it’s another zombie film. Then, as the audience feels comfortable in the familiar, Unhuman pulls the rug out from under us.

It’s a neat storytelling trick, and the audience will wag their finger at the screen and say, “Dunstan, you got me good there.” But will the viewers stick it out until the twist? Without knowing there’s something bigger up ahead, there’s a good chance they could lose interest and turn off the movie before then. While we’d all like to believe that the audience will sit patiently and watch a movie from beginning to end, the reality is much different. It would be a shame, really, since the second act makes the first act even more impressive once everyone figures out what’s going on.

Now, here’s the irony: The third act of Unhuman goes off the rails towards the end. For about 70 or even 80 minutes of the runtime, the film plays out like an exceptional mastery of horror, comedy, and social commentary. Through the cuts and chuckles, Unhuman reveals a unique teenage story that has yet to be tackled in the genre. Sadly, the ending doesn’t land as well as it should because of its multiple false finishes. While the trope of the killer rising one more time when everyone thinks they’re dead works for Halloween and other slasher films, it isn’t necessary here. It could have been avoided altogether, especially since it’s repeated more than once.

The fumbled finish aside, Unhuman sinks its teeth into a brand-new genre of horror comedy. It might look like a zombie film from the outside, though it’s so much more. In fact, it has a lot more in common with a certain Jeff Kanew film, but that might be saying too much already.

Blumhouse Television and EPIX’s Unhuman will be released on digital on 3 June 2022.