Unfair Board Game Review – Build The Best Theme Park, Whatever It Takes The box doesn’t make it obvious, but on the rulebook, you’ll notice the name as Funfair but the F has fallen off. This eludes at the comedy of this empire building card game. Business is cutthroat (pirate joke!) in the theme park business.

Over the course of several turns, players build attractions such as rides, food places, sideshows and theatres, then upgrades them with features, guest services and quality (yes that’s an actual upgrade) to attract the most visitors, earning the most money, to then put that money back into the expansion of their park. Hiring employees offer passive abilities, but counter offers and poaching from other players is a reality. Rides can even be sabotaged or closed by the weather. It can all get a bit crazy, but it’s highly competitive fun that doesn’t take too long to play.

Unfair has a board, but it’s mostly a placeholder for the decks of cards and the Market. The box includes several themed decks of cards, each including the following cards: Before the game can begin, each player selects a specific theme. They won’t be limited to only this theme during the game, but it does color the types of cards available and the specific requirements and allowances for that player’s park. As of this writing, all parks are allowed 5 attractions of which 1 can be the Showcase, with a capacity of 15 stars (discussed later). Later expansion packs (or packs we haven’t tried) may have different values. The themes are shuffled together to form the Park, Event, Blueprint and City decks.

Players go through a round together, but play their turns in order for each of the phases. First, a City card is drawn. In the beginning, these card (Funfair) are mostly helpful towards the players, but after the halfway mark (Unfair) they turn nasty. Each player is dealt one new Event card, then Event cards can be played in turn order. This keeps going until all players have passed, usually only two or three iterations. These Event cards allow players to mess with each other’s fairs, stealing employees, closing or demolishing rides, stealing money, etc.

After this comes three Park phases with an optional fourth (based on Event and Employee cards). Each player takes a single action in turn order for each phase. These actions are taking cards from the board into your hand (without paying for them), building your personal park (this is when you pay for them) or demolishing something to allow future expansion. If none of these are possible, a player can pick up all the imaginary loose change lying around their park, netting 1 coin per attraction.

During the Guests phase, each player tallies up the number of stars in their park. Each of these is converted to 1 coin, however, depending on the chosen themes, each park has a visitor cap limiting this income to a certain amount unless addressed by Park or Event cards.

Lastly is the Cleanup phase. Any Event cards in play are discarded, closed attractions are reopened, the Market is cleared and re-dealt, all players discard down to 5 cards in their hand, and the First Player marker is moved clockwise. Then the next round begins.

This entire process goes for 8 rounds, counted by the City cards. At the halfway mark the Blueprints deck becomes locked unless specific cards refer to it.

At the end of the game attractions score points according to the number of stars they have including all their upgrades. Add to this any Blueprints that have been completed (or subtract penalties if failed), and half your remaining money rounding down. The person with the most points wins.

Components: 4/5. There’s not much to be said of components except for the roller-coaster shaped phase tracker. The card art is beautiful and thematic, icons are clear and easy to understand once you know what they mean. Strangely, one of the theme packs had slightly larger cards in our set, but the rulebook suggests sleeving them anyway. Speaking of which, the revised rulebook has blue pen call-outs that look like editor’s notes throughout, lending a whimsy to the learning experience.

Gameplay: 4/5. It’s important to stay cognizant of the phases so players don’t get confused. Having a specific player narrate through the play order and move the phase tracker helps a lot here. Other than this, the game flows nicely.

Complexity vs Depth: 3/5. By its very nature, a card game requires reading each card carefully to realise the implications of its uses. Some minor rules are not printed and take a few plays to remember but it’s not a deal breaker.

Theme: 5/5. The theme is everything in Unfair. Names and art of cards, the logic of specific guest services going with specific attractions, the oddly accurate things that can go wrong during the running of a theme park… It’s very well represented and very entertaining. The ability to switch out the themes for each game can alter the feel of the game and the combinations achieved by the cards in play.

Overall: 4/5. Unfair is a great card game but can play as long as a larger board game (half an hour per player) which not everyone enjoys. The theme carries through with whimsy and poignant sad-but-true comedy. Well designed and well executed.

Due to the fact that Unfair is a Kickstarter-backed title availability is still a little sketchy, though there’s a Print & Play version available on their website . 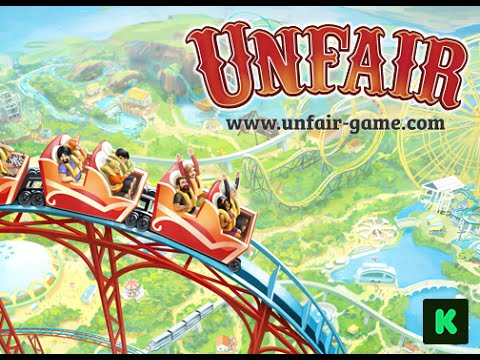