It was a bittersweet ending for Uncharted fans when we discovered that Uncharted 4 would be the last time that we would have the chance to go adventuring with Nathan Drake. Thankfully, Naughty Dog has given us another opportunity to once again go in search of ancient treasures, albeit this time without some of the familiar faces we’ve grown to love in the new Uncharted: The Lost Legacy. 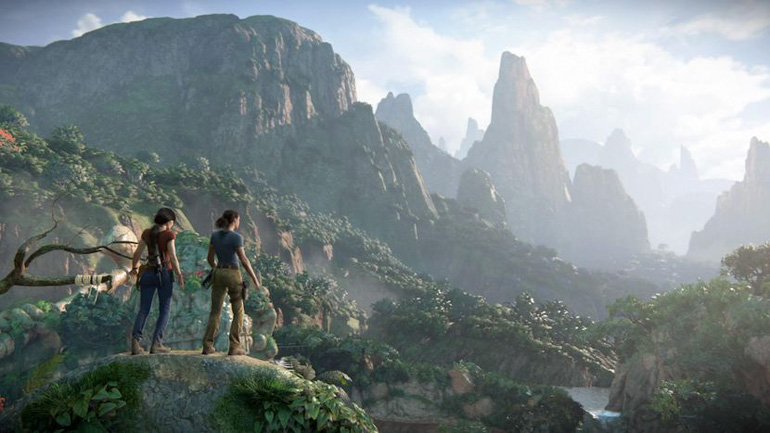 Uncharted: The Lost Legacy started life as a DLC for Uncharted 4 but, with its size ballooning rapidly, Naughty Dog instead decided to release it as a standalone game.

The story follows two unlikely allies: quick talking Chloe Frazer, who we last saw in Uncharted 2 and tough-as-nails Nadine Ross, who faced off against the Drake brothers in Uncharted 4. These two are forced into an uneasy alliance on their quest to find the fabled tusk of the Indian god Ganesh. Players get to control Chloe, with Nadine tagging along. While the chemistry between Chloe and Nadine might be different from that between Nathan and Sully, their relationship and unique personalities do create some interesting moments that help drive the plot forward. After initially being a bit skeptical about whether these new two leads would be able to fill the shoes of Nathan Drake, I quickly found myself warming up to them.

However, it did feel strange jumping across ancient chasms and gunning down hordes of mercenaries without Nathan Drake or Sully at my side. Having said this, the odd paring of Nadine and Chloe, each with their own strong individual personalities, quickly made me forget about the “other guy”.  I slowly started to care for these two new leads as the game progressed. This had a lot to do with the way in which certain narrative beats started to reveal bits of information about these two characters we knew little about. 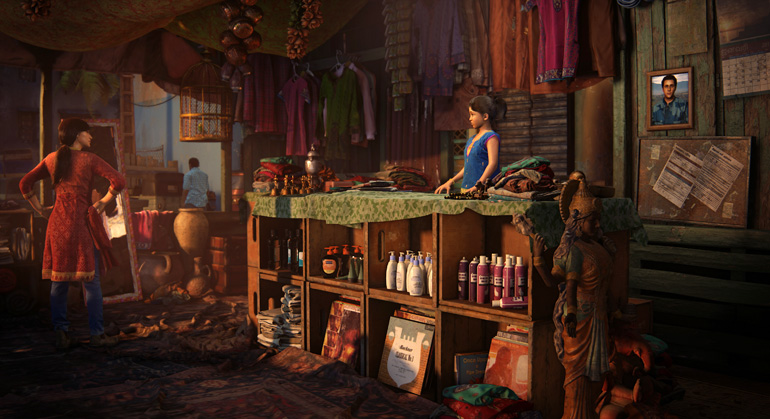 What would an Uncharted game be without a memorable villain set on foiling the two protagonists quest? Enter the ruthless Asav and his group of hired guns. Initially the soft spoken Asav came across as being less intimidating than previous baddies. That, of course, quickly changed as I discovered that there is more to him than first meets the eye.

Naughty Dog just can’t seem to escape jungle environments as the game contains its fair share of these. What did impress me is how they are able to make each iteration feel unique and different. As you explore the environments in the game, you’ll quickly notice that there is a clear difference between the lush jungles of the Amazon from previous games and the wet rain soaked jungles of India. There is no doubt that when it comes to packing loads of detail into environments there are few that can match Naughty Dog’s skill.

Building on the more open environments found in Uncharted 4, about halfway through the game Naughty Dog gives players the opportunity to explore one of the largest open areas.

Now, while I did appreciate the openness of this environment, I did notice that it felt a bit empty. Sure, there where a few enemy outposts scattered across the map but other than that there just isn’t much else to do. Once the game returns to more linear sections, you start to realise just how masterful Naughty Dog is at crafting more controlled and linear experiences.

This just once again proved to me that not all games need to have wide open spaces to explore and that sometimes being more linear and focused is better suited to certain games. Sure, the more open area does give players the opportunity to experiment in how they approach the various enemy encampments, but I tended to enjoy the more linear and scripted sections a lot more. 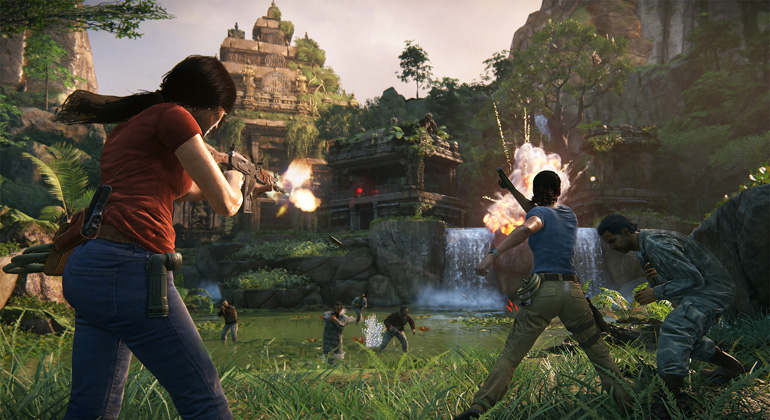 It’s amazing to think that after all these years Naughty Dog still manages to leave players breathless when exploring their beautiful environments. From the lush jungles to the ancient temples, I continually found myself stopping and gawking at the beauty that surrounded the characters.

Puzzles this time around tend to be more complicated but without leaving players feeling frustrated. I mostly found myself struggling just long enough to make finally solving a puzzle feel rewarding. While there still are some “turn this to open that” puzzles, most come across as having a bit more depth than in previous games.

For those that have played Uncharted 4, combat will be very familiar as not much has changed beyond the addition of a few new weapons. While Chloe does play similar to Nathan, she does have a new lock pick ability which allows her to open crates packed with goodies that are scattered across the environments. The grappling hook also makes a welcome return, allowing players to once again swing around their environments like some sort of Indiana Jones/Spider-Man hybrid. In-between shooting enemies, players will still be sliding down slopes, jumping unto ledges and climbing all manner of ancient structures. 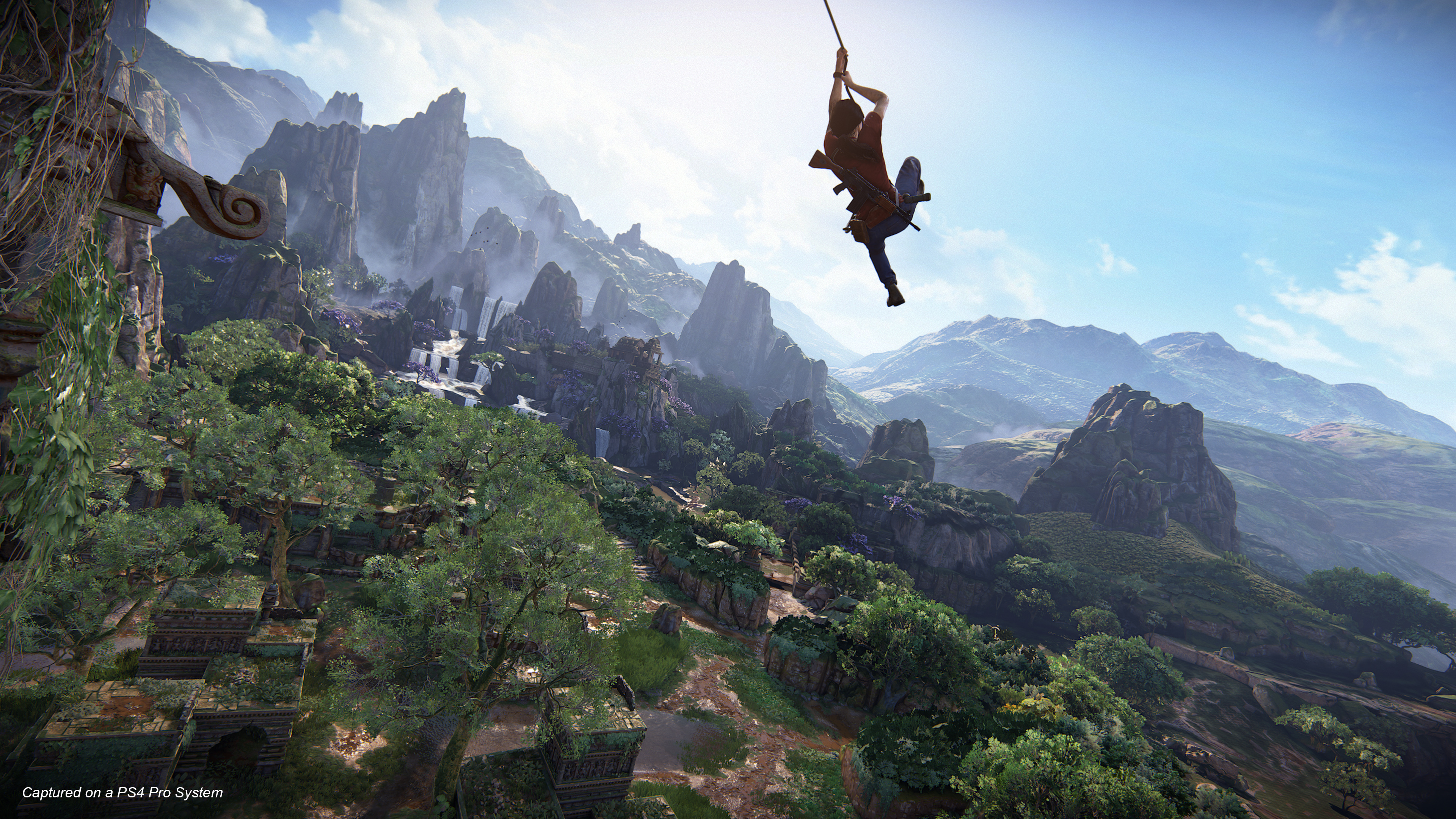 With action set-pieces always having played an important role in the franchise, Uncharted: The  Lost Legacy> is filled with its fair share of high-speed chases, explosions, and just all-around awesomeness.

While I did complain a bit about the pacing in Uncharted 4, which had sections that just felt like added padding, I was pleasantly surprised by not only the pacing of Uncharted: The Lost Legacy but the length of the game, which spans about 7 – 8 hours. There was never a moment where I found myself suffering from repetition fatigue or feeling like I needed to take a break. The expert pacing kept me enthralled until the end credits rolled. 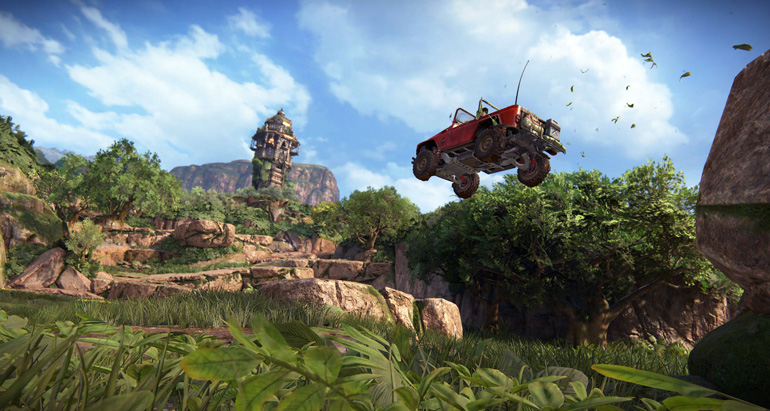 While Uncharted: The Lost Legacy doesn’t stray very far from the formula that made the franchise such a success in the first place, it does offer us two new and interesting protagonists. I’m glad to see the franchise finally exploring new characters and reminding us that the Uncharted universe is far larger than just Nathan Drake and his gang.

As I look back at my time spent playing Uncharted: The Lost Legacy I realise just how much I enjoyed treasure hunting with both Chloe and Nadine. They have successfully filled Nathan Drake‘s shoes. Hopefully, we’ll get to go adventuring with Nadine and Chloe again in the near future.