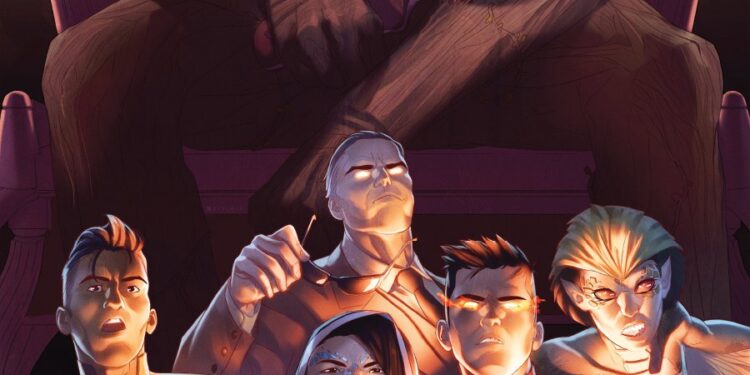 Those Inhumans have been busy lately, so with their time and attention being taken up by the second Civil War it makes sense to give them an annual too. [dropcap]G[/dropcap]rid’s return to his home country of India isn’t quite what he’d hoped for, as he and Crystal have to rescue a navy destroyer. Unfortunately, that also means damaging the ship and, while it’s necessary, it isn’t appreciated by the Indian navy. Afterward, Grid introduces fellow Inhumans Naja and Inferno to his family. While his family welcome Grid home with open arms, they can’t help but question the loyalty he has to the Inhumans instead of his home.

When he receives a visit from Ajay Roy – now going by the name Banyan – there’s potential for great change. Since becoming an Inhuman made of wood, Banyan has been forced to abandon his old life as a movie star and spent a short time as a mob enforcer. Having killed his criminal employers, he needs Grid’s help to redistribute the local electricity supply. For a community where the divide between the wealthy and the poor is so clear, can Grid refuse to help? And is Banyan’s plan really as altruistic as it seems? Given the electricity supply problems here in South Africa, this topic is one which is easy to relate to. While energy gets diverted as those in charge see fit, the poorer areas scramble to “steal” electricity to survive and the national grid itself comes under severe strain for a variety of reasons. With that in mind, Banyan’s plan here makes sense even if there are other motives at work.

Also, it’s good seeing a personal tale for some of the latest Inhumans away from the whole Ulysses/Civil War II arc. Grid is an interesting character, and his family life is a welcome relief from the cliché of “Our son is a mutant and we reject him”. Instead, to a large extent they embrace him and his newfound abilities and their only real concern is that he’s risking his life for a group of people who he owes nothing to.

The problem here isn’t with the writing or the art, since both work well enough and it’s great seeing a story covering a topical issue with diverse characters. Unfortunately, the story itself is formulaic, right down to the completely predictable ending. Add to that how just a handful of extra pages more than usual is now considered an annual, and it becomes questionable whether it’s worth buying this issue. Annuals used to be something special, a bumper bonus for the fans, and this really isn’t. Which is a shame, because as a regular comic it’s pretty good.

If you’re keen to keep up with the Inhumans then please buy it. Just be warned that the most uncanny thing about this annual is how average it is.