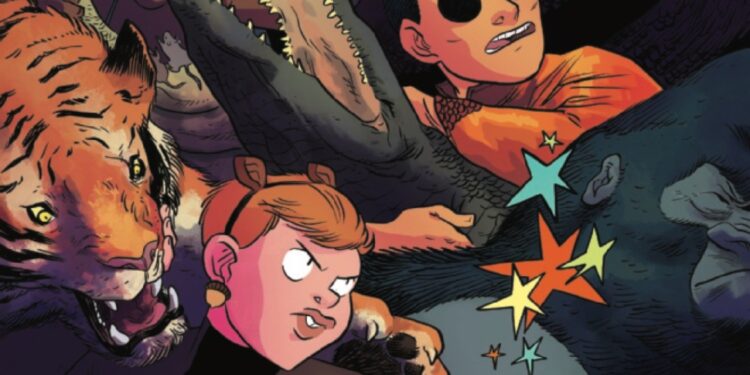 It’s time for the supervillain exposition issue, as Squirrel Girl’s latest foe spills the beans on her evil plan in The Unbeatable Squirrel Girl v2 #19. Between flashbacks and all the usual megalomaniacal shenanigans, it transpires that all the animals of the world have been spying on us through no fault of their own, and even led us to create amusing YouTube videos of some animals acting like jerks. But can Squirrel Girl put a stop to animals being turned against us, or even endure the lengthy villainous monologue of doom? The Unbeatable Squirrel Girl has suddenly become a bit of a hot commodity, thanks to news of her appearing as a live-action TV character. And good for her! She totally deserves it! But with all this sudden real-world fame, how does the latest issue of her comic fare? Pretty darn well, actually. Although, yes, it IS mostly just a giant evil speech. But what a speech!

As regular readers may know by now, this is a series which can turn from outright farce to something a bit more serious in the blink of an eye. While there are the usual light-hearted jokes and comments being offered up, there’s also a rather serious undertone as the implications of the plan become more apparent. The logic behind the evil scheme is almost common sense in its simplicity, even if the mechanics of it are fiction.

It would have been nice to see other characters play a bigger role here (even Squirrel Girl herself is mostly pushed to the sidelines), but that’s really a minor complaint. A large part of The Unbeatable Squirrel Girl v2 #19 is setting up the next part of the storyline, and by the end the cliffhanger is one of the most intriguing, paranoid creations ever. It’s like Hitchcock’s The Birds only taken to a whole new level. However, beyond that, the real point of this series is still fun… which it is. Lots and lots of fun. And really, that’s what counts.

On a side-note, I’d like to say that there’s a brief backup tale featuring the continuing saga of Alfredo the Chicken and Chef Bear. This story has been one of the most shocking moments in the series so far, and the latest twist on it is either the sweetest thing you’ve ever read or the most demented. Personally, I’m loving it.

Squirrel Girl may or may not be unbeatable, but her comic is absolutely worth reading.